Two weeks ago, this column ended with Francis Scott Key as a young man married to his beautiful, wealthy sweetheart and ready to embark on a law career in Washington, D.C. with his influential uncle Philip Barton Key.   Throughout the rest of his life, he may occasionally have regretted not making the church his profession, but he could not regret his associations with people who made history in the nation’s capitol during the early nineteenth century – men like Daniel Webster, Sam Houston, and Andrew Jackson.

Key worked closely with presidents, members of Congress, Supreme Court justices, religious leaders and others while maintaining his personal integrity and their respect.   A friend wrote, “His whole life is spent in endeavors to do good for his unhappy fellow men…”   The very lucrative law practice he eventually inherited from Philip was his source of income, but there were other facets to his life than the law and writing “The Star-Spangled Banner.”

In spite of his busy schedule, Key found time to educate his eleven children and establish a free school in Georgetown.  The school was an idealistic experiment which some of his associates thought ludicrous, but he had a strong sense of obligation to make his world a better place.  He also helped found the American Colonization Society, an effort to establish a colony of freed slaves on the west coast of Africa.  The Society, backed by groups hoping to solve the dilemma of what to do with former slaves, ultimately failed, but it was another of his efforts to solve America’s social problems during the 1820s and 1830s.

Key, a warm and sympathetic person, maintained friendships with many people whose beliefs were sometimes quite different than his own.  John Randolph of Roanoke was one such individual, a brilliant but eccentric politician from an aristocratic Virginia family and a firm believer in states’ rights.  Randolph was a bachelor, heavy drinker, opium user, and owner of more than 300 slaves, but he enjoyed the company of Key, the temperate family man who had freed his slaves and felt America needed a strong central government.

During the 1830s, Key successfully lobbied President Andrew Jackson to appoint his brother-in-law, Roger Brooke Taney, as Chief Justice of the Supreme Court.  Although Key and Taney felt very differently on some issues, they had been good friends since they both practiced law in Frederick, Maryland in 1801-02 and the two families spent their summers at Key’s plantation, Terra Rubra, for many years.

Key was an influential insider during the two-term administration of Jackson although he never held an elected office.  In 1833, Jackson trusted him to carry out a very sensitive diplomatic mission involving the governor of Alabama.  Key served as District Attorney for the District of Columbia for three terms, but it was not an appointment he sought.   In general, he disliked confrontations and intrigues.

Francis Scott Key died of pneumonia at his daughter’s home in Baltimore in 1843 in his early sixties.  Penning our national anthem was just one of many accomplishments of this complex, deeply religious, patriotic man born in present-day Carroll County. 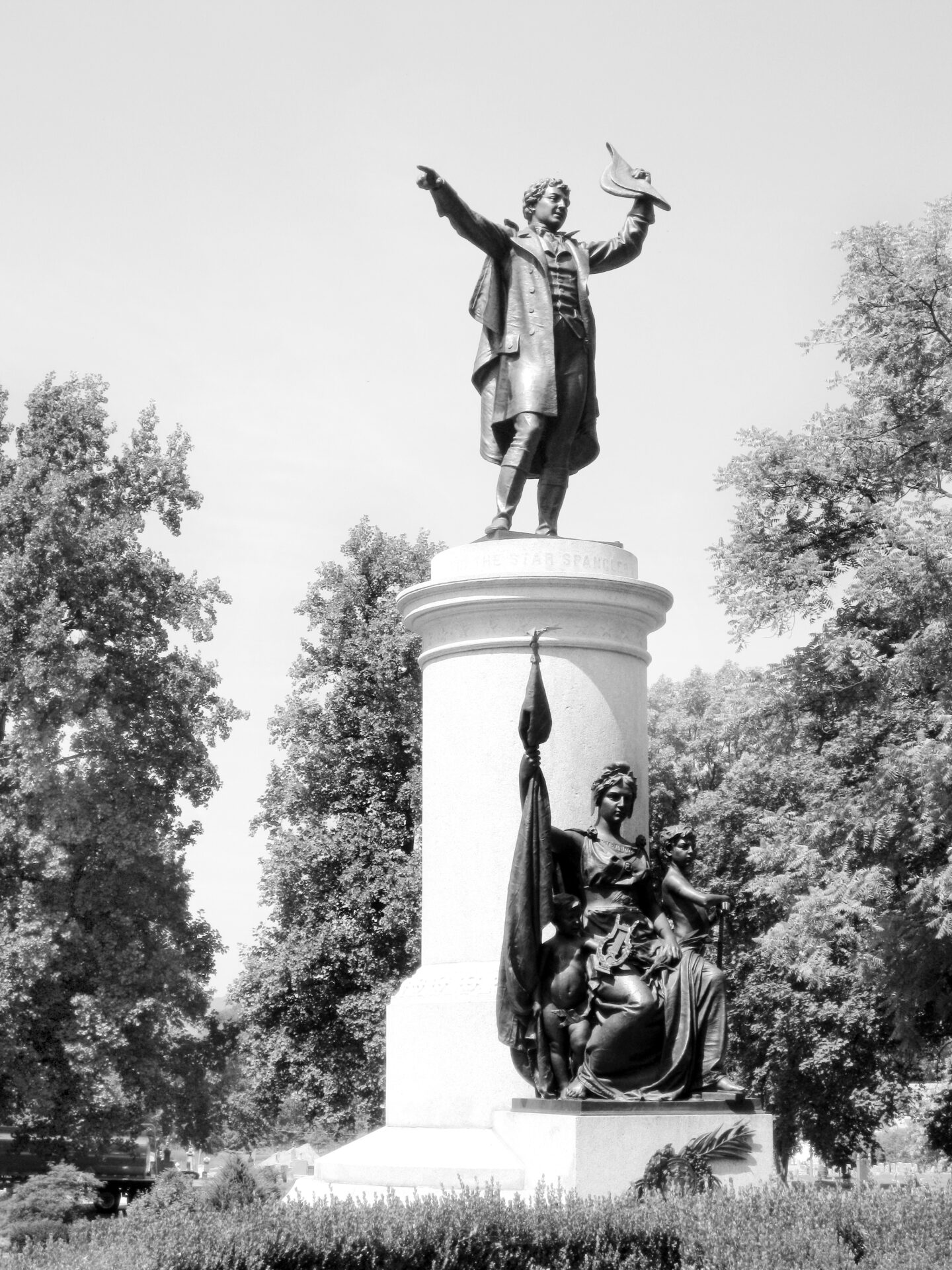 Photo caption:  This elaborate monument at the entrance to Mt. Olivet Cemetery in Frederick was dedicated in 1898 to honor Francis Scott Key, author of “The Star-Spangled Banner.”  Key was originally interred in Baltimore, but his body was later moved to Frederick.  He was born at Terra Rubra near Keysville in western Carroll County.