If a picture is worth a thousand words, what is a map worth?  There is a 1507 map of the known world currently on exhibit at the Library of Congress which cost $10 million, but that was the first to ever show the name “America” attached to the Western Hemisphere!

Some readers may already have seen Simon J. Martenet’s map of Carroll County published in 1862, but if you haven’t, it is worth spending time looking at it in detail.  Anyone with a computer and internet access can see it in the original colors by typing “Martenet Map Carroll County” into a search engine such as Google.  Then click on the link Martenet’s Map of Carroll County, Maryland: entirely from actual surveys…    Follow the directions on the website and gradually zoom in on the election district where you live.

At first you may have difficulty finding your precise location because the roads have changed quite a bit over the last 150 years, but gradually you will begin to recognize some landmarks.   If you live in an incorporated area such as Manchester, Sykesville or another town, you won’t find it shown in much detail, but if you live in the country you will learn who your neighbors might have been in the 1860s, where the nearest blacksmith shop was located, where your children might have walked to school.

Martenet began publishing maps of various Maryland counties about five years before the Civil War as a sideline to his regular work as a surveyor.  He started with Cecil County and did at least Howard, Charles, Talbot, Anne Arundel, Carroll, Montgomery, Washington, Queen Anne’s and Frederick counties but never completed all of them and some he made can no longer be located.  His 1885 wall map of Maryland was so impressive that the legislature ordered it used in schools throughout the state.

To help with the expense of publishing, Martenet and his surveyors solicited subscriptions from landowners or tenants as they mapped an area using an odometer wheel and a compass, not surveying instruments.   The men in the field kept meticulous notes of the number of revolutions of the wheel and the direction they were headed, then took the information back to their Baltimore office where draftsmen began plotting the maps.   Although this mapping method resulted in slight distortions, it met the needs of the time period and subscribers were delighted when they saw their names in print on the large, hand-tinted maps.

Occasionally, Martenet’s workers encountered problems – some were equipment malfunctions, some were weather-related and others were the lack of landowners willing to pay to have their names on the maps.  While working in Poolesville, Montgomery County, one surveyor noted that the town was a “shabby place, not one subscriber.”

Today, historians and genealogists are fascinated by the maps that are still available.  They show not only roads, towns, mines, churches, tanneries, grist and saw mills, but also the names of many landowners of the 1860s.  Simon Martenet’s firm still flourishes in Baltimore.  Monochrome copies of the Carroll map are available at the Historical Society of Carroll County’s “Shop at Cockeys.” 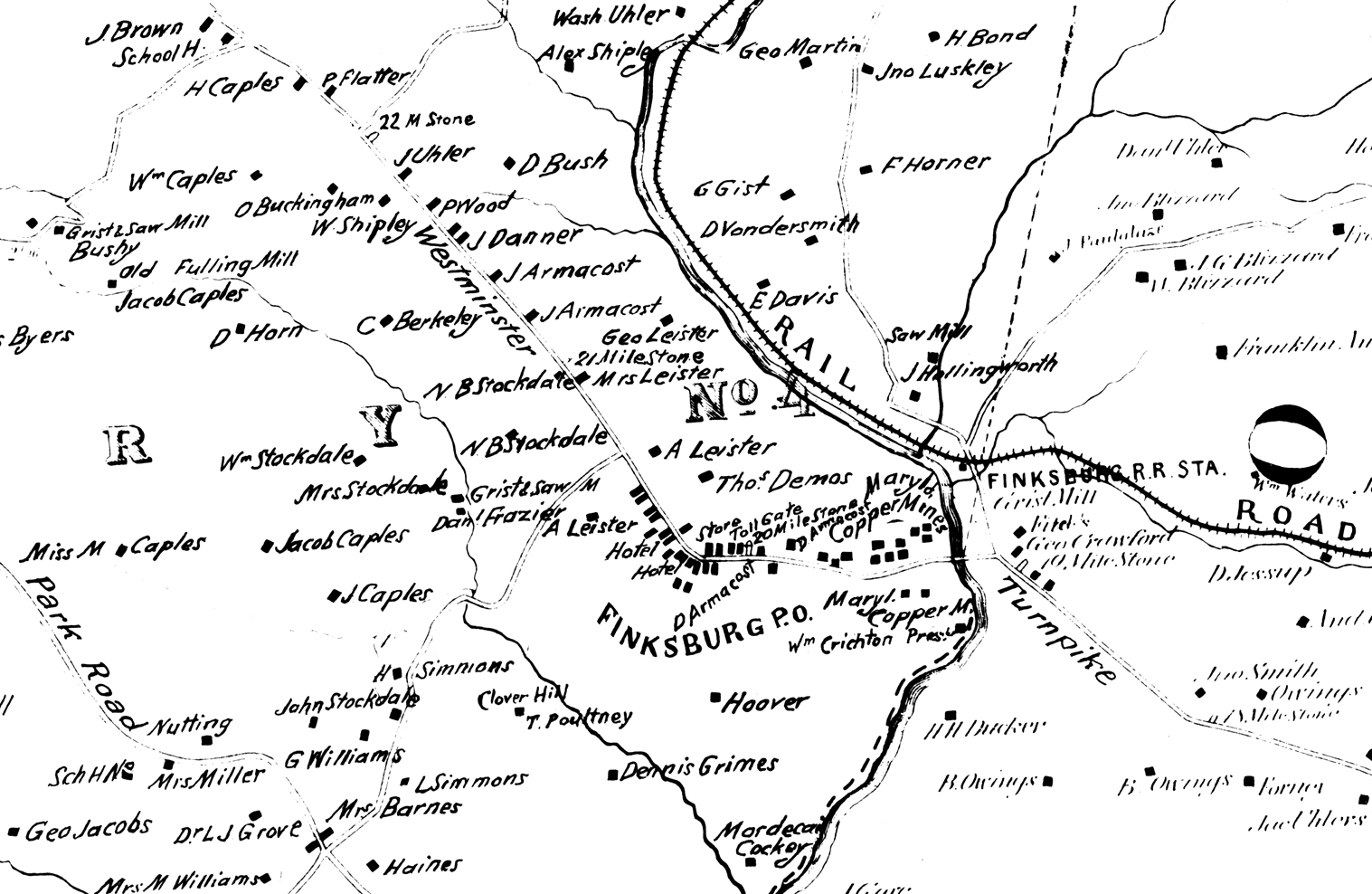 Photo caption:  This small segment of Martenet’s 1862 map of Carroll County features Finksburg – its hotels, railroad station, mills and mines, the Westminster Turnpike with a toll gate and names of many landowners in the area.