February is a month of many celebrations including the birthdays of Abraham Lincoln and George Washington, Valentine’s Day, and Black History. Perhaps we have so many celebrations in order to forget the brutal weather that often accompanies the month.

One of the worst Februarys in Carroll County history began Saturday, February 12, 1899. The temperature dropped to twenty degrees below zero. Snow began to fall lightly in the evening and continued into Sunday. The Carroll Record newspaper later reported that the storm continued through Sunday night “with increasing violence during Monday, reaching its heights during the night. On Tuesday, the sun came out brightly; the wind discontinued its tantrums, and humanity commenced to look about for ways and means for one another.” Around 24 to 27 inches of snow had descended upon the county with drifts ranging from four to twelve feet.

Silence fell for no mail was delivered on Monday and Tuesday—telephone and telegraph became the only means of communication. One newspaper predicted that regular contacts and travel would not be restored for a week to ten days.

Around the rest of the state of Maryland, reports were much the same. Trains delayed, public roads impassable, and individuals overcome by the elements began to be tallied. In Baltimore, businesses closed, and streetcar companies struggled to provide transportation but were obliged to stop operations entirely by mid-storm. People in various industries who had felt obligated to travel to the city at the start of their business week were either unable to make it into the city or found themselves staying the night in a hotel. Suburban areas were completely shut off, and mail was non-existent.

In the nation’s capital, business was suspended, and streetcars were unable to run. There was an urgent appeal to Congress “for an appropriation of $20,000 to remove ice and snow from the streets and $5,000 to clear a channel in the Potomac. Two thousand men will be given employment.”

Back in Carroll County, residents demonstrated their resilience in overcoming the elements. Taneytown’s newspaper reported that the day after the storm ended, “carrier Feeser of the York Road star route managed to make a trip bringing us Monday papers and other mail, and on Thursday he again brought in a large mail with Baltimore papers down to date. On Wednesday, the railroad was opened from the north by four heavy engines and a snow plow, and on Thursday, we had a passenger train north, morning and evening. However, the Frederick end is still blocked owing to the fact that they have no snow plow or heavy engines on that end, and the company will not allow the ones used through here to cross the Bruceville bridge.”

The Blizzard of 1899 would later be referred to as the Great Arctic Outbreak of 1899 and the St. Valentine’s Day Blizzard. Nationally, the intense cold and snow impacted the population, infrastructure, and agriculture. From across the nation came reports of snow-bound trains, ice blocking port and dock facilities, interrupted communication, and shortages of food and fuel. Schools were closed, and everyday life in both city and countryside was “greatly deranged,” particularly for the poor. 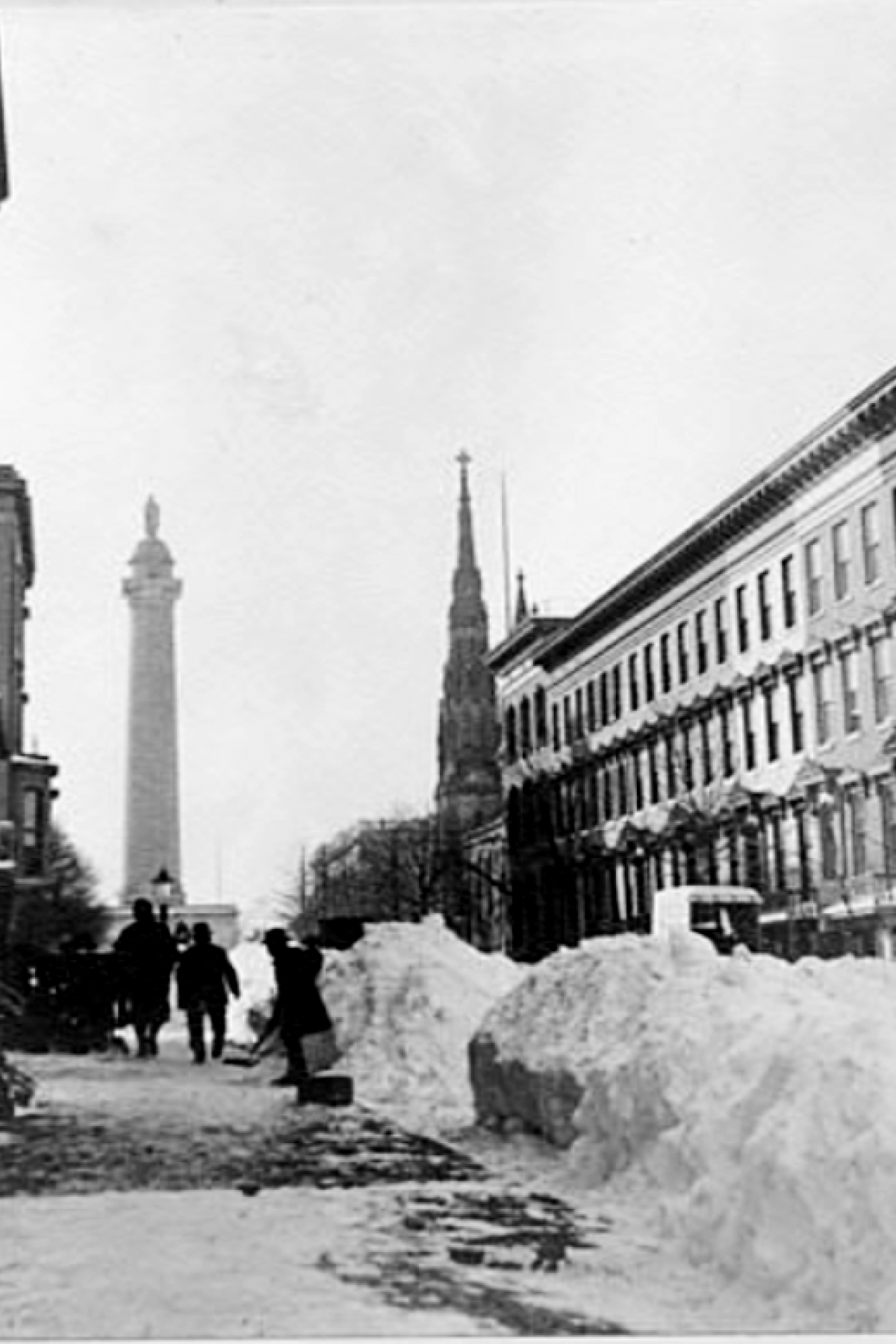 Photo Caption: The aftermath of the Blizzard of 1899 near the Washington Monument which is located in the center of the intersection of Mount Vernon Place and Washington Place in Baltimore. (Courtesy of Maryland Historical Society)