Contrasting today’s world with that of the nineteenth century is always lots of fun, especially when the differences are very pronounced.  Here is a brief look at some Carroll County doctors who practiced during that time period.  First, however, glance at the accompanying notice published in 1866.

Maryland can boast of having the oldest (1807) public medical school in the U.S., so it isn’t surprising that many local physicians attended that institution.  William Willis, born in what is now Carroll County, was probably the first graduate from the College of Medicine in Maryland to set up practice here.  He was just eighteen when he finished his studies in 1818.  Before medical schools were founded, young men might obtain experience by apprenticing themselves to established physicians, but there were plenty of charlatans calling themselves doctors with no training at all.

In his book “Carroll County Physicians of the Nineteenth and Early Twentieth Centuries,” Dr. Theodore Woodward noted that all of our early physicians were general practitioners and “had to practice with their senses and good judgment.  In those days, bacteria and viruses were unknown…These men struggled with baffling illnesses and daily gave spiritual as well as physical aid to the sick, cheer and encouragement to the convalescent, solace to the families of the dying and words of hope to the ill.”

In 1864, Dr. L. J. Grove advertised his services to the Union Bridge community as an “Eclectic Physician.”  He claimed to have twenty-six years of experience in medicine, midwifery and surgery and “feels confident that he will render satisfaction to all those who may place themselves under his care.”  Dr. Francis J. Crawford practiced for more than forty years in the area around Taylorsville and in one year made two thousand medical visits which included delivery of 65 babies.  His account books, which are part of the Historical Society’s Manuscript Collection, make interesting reading for the fees he charged, the patients he attended and the variety of ailments or injuries he treated.

Many of Carroll’s doctors carried on family traditions.  When Dr. Thomas J. Coonan died in 1922, his obituary noted “he represented the fourth generation of the Country Doctor in his family.”  Although he was in his 40s when the U. S. entered World War I, Dr. Coonan volunteered for the medical corps and served until the war ended.  His son became the fifth generation to practice medicine and followed in his father’s footsteps by serving in World War II.  Other families such as the Billingsleas, Weavers and Herings also boasted multiple generations of doctors.

What is astonishing is the number of other contributions many of these doctors made to their communities.  Francis Crawford was a successful farmer and cattle breeder.  Thomas Coonan served several terms as Westminster postmaster.  Joshua Webster Hering served as a state senator, Comptroller of the State of Maryland, executive officer of Union National Bank and lecturer at Western Maryland College (now McDaniel College).

Several generations of Woodwards have been doctors, but they also lent their talents to banking, the Carroll County Medical Society and writing the stories of other physicians. 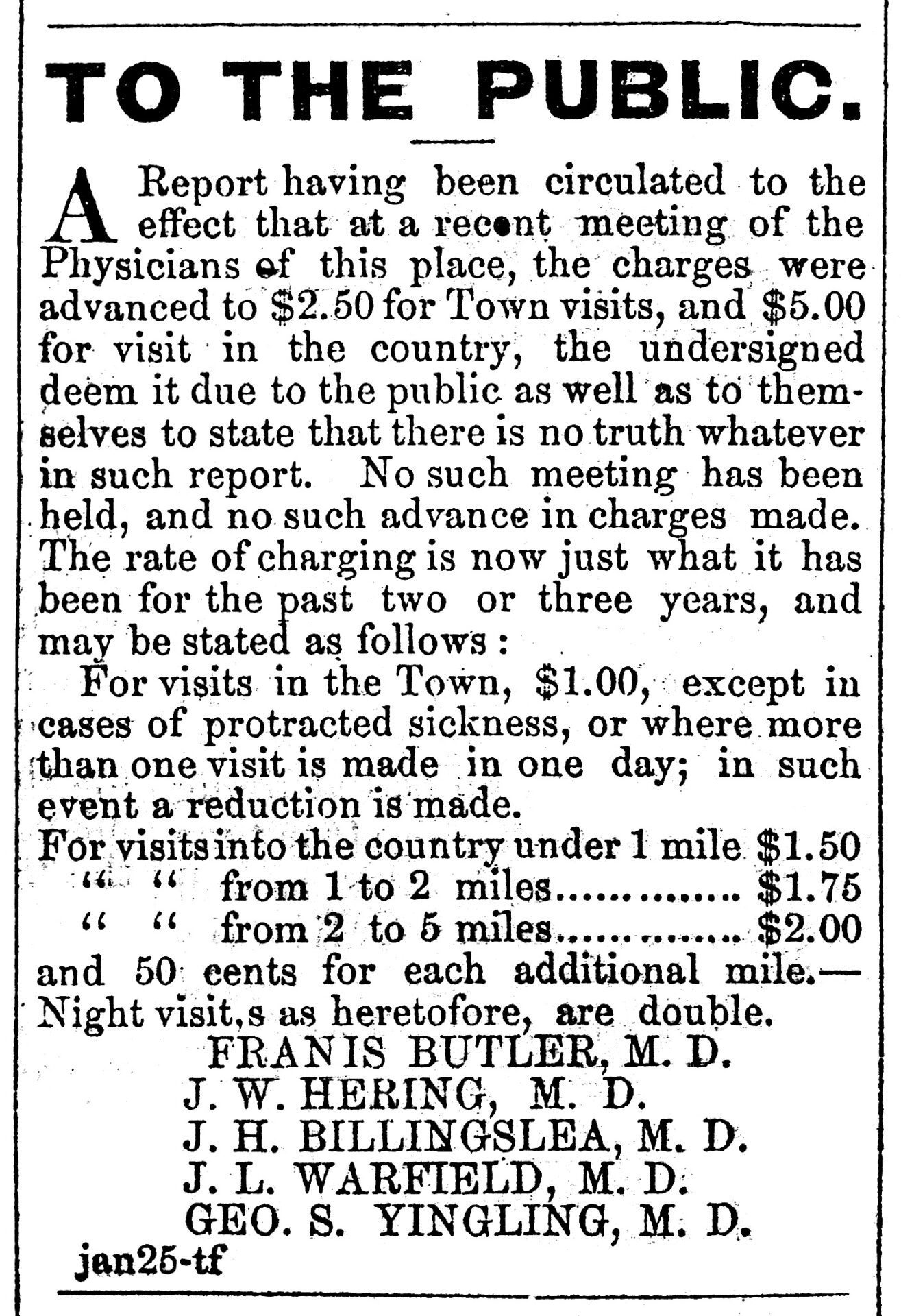 Photo caption:  What did a visit by the doctor cost in 1866?  This notice appeared in the March 29th issue of The Democratic Advocate, a Westminster newspaper.