8 March 2020 – From Clothes to Prohibition to the “Red” Movement

8 March 2020 – From Clothes to Prohibition to the “Red” Movement

From Clothes to Prohibition to the “Red” Movement

We are so lucky in 2020 to be able to access a great deal of interesting history thanks to the internet. In writing Carroll’s Yesteryears articles I often rely on old newspapers available online. It becomes easier each year as more of them are digitized. Looking back at issues of Taneytown’s newspaper, The Carroll Record, here are interesting tidbits gleaned from one hundred years ago.

The census taken in 1920 showed the U.S. population at roughly 100 million, so it has more than tripled to approximately 329 million today. Maryland’s population then was only 1.5 million and Carroll County boasted barely 34,000 inhabitants.

In January that year The Carroll Record begged its readers, “Not only meet the [census] enumerator cheerfully and intelligently, but help him to get through with the job quickly. If you have plenty of time, he does not.” Census takers were collecting information about the population as well as agriculture, manufactures, forestry, forest products, mines, and quarries.

Although World War I ended in November 1918, that topic still occupied the minds of many in the U.S. in early 1920. The French government was planning to send back the bodies of 20,000 Americans killed on its battlefields for burial in the States. And the Y.M.C.A., not the government, announced it would award over 46,000 scholarships to discharged soldiers, sailors, and marines to further their education.

In covering the international scene, newspapers offered information about the new “Red” government in Russia. The U.S. Attorney General declared, “It would be extremely helpful to the cause of good government, the maintenance of law and order and the preservation of peace and happiness in our country if the people would resolve to study, understand and appreciate the so-called Red movement.” Hmmm…

Prohibition, according to a headline, was “generally in force.” Horses were widely advertised for sale as well as cars with brand names such as Ford, Nash, and Velie. The county tax rate was 36 and 5/12 cents per $100 of assessed property. Two Westminster dentists, J.S. and J.E. Myers, offered x-rays and nitrous oxide (laughing gas) to their patients and had “lady attendants.” No matter… tooth extraction still wasn’t pleasant.

The acting president of all-women’s Hood College in nearby Frederick took aim at women’s fashions saying they were immodest in comparison to the “simple, pure and unassuming clothes which were worn by our grand-parents.” Little did he realize that a few years later women’s clothing would reveal a great deal more. Meanwhile, Hesson’s Department Store in Taneytown was advertising men’s underclothing—“two-piece and union suits, in cotton, wool, or Wright’s medicated underwear.” Another store offered men’s stiff collars at prices reduced to 7 or 10 cents.

What a confusing period this must have been in American society—women looking for the right to vote while their modest clothing (by today’s standards) was assailed—prohibition in effect yet openly flaunted nationwide—more and more people leaving family farms for the hustle and bustle of city life. Thank goodness nobody saw the Great Depression around the corner. 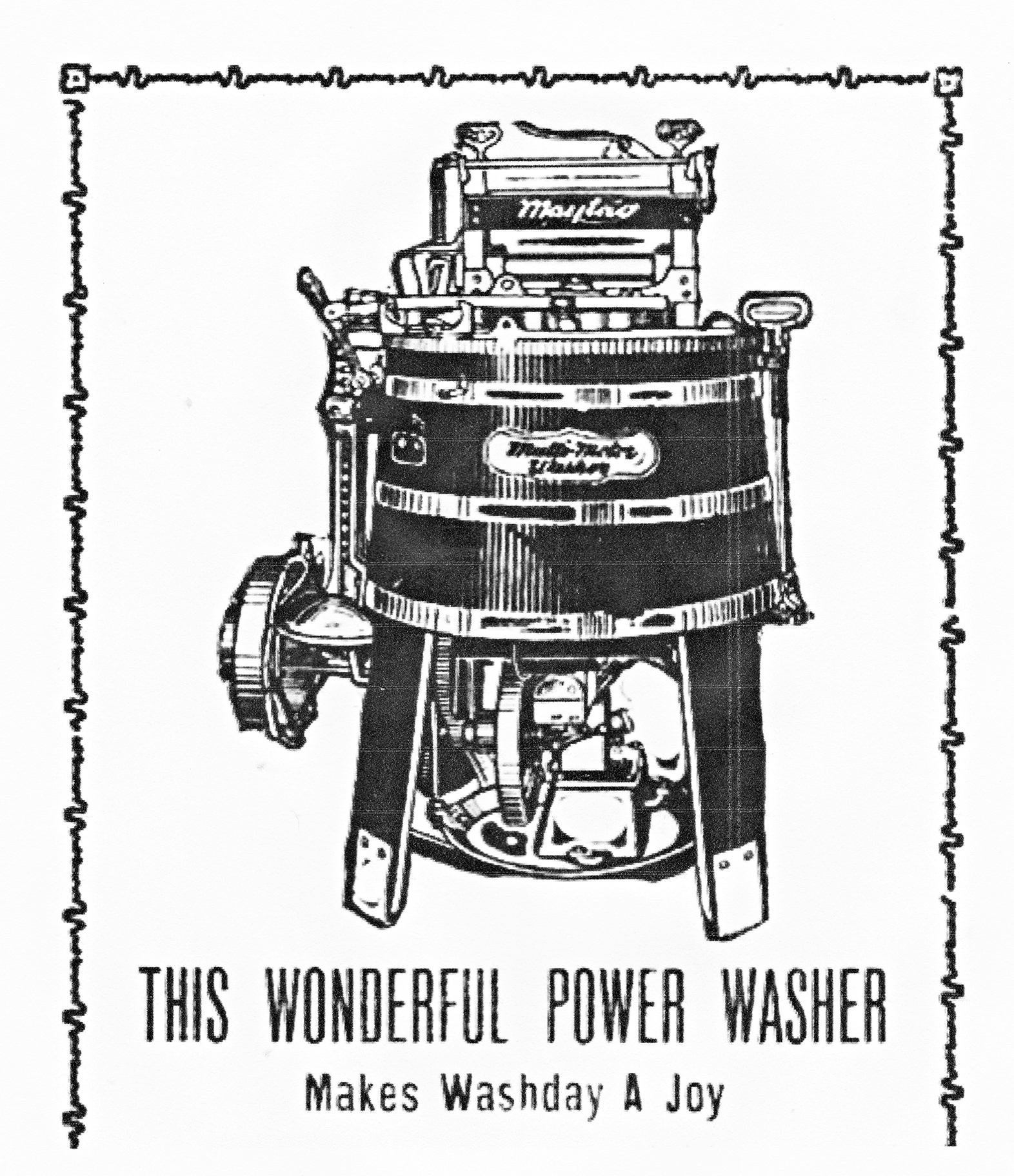 Image caption – Maytag advertised this electric washing machine in 1920. Did it come with an engineer to operate it?