Strolling through the shady lanes with your baby mine.

You hold her hand, and she holds yours,

In the good old summertime.”

Glancing back at summer issues of Carroll County newspapers from the late 19th century, you get a wonderful impression of the fun to be had once farm work and other duties could be laid aside. From June through September there are articles covering local events as well as excursions that took people farther from home. Over the next several “Yesteryears” columns, I’ll highlight some of the activities reported in Westminster’s American Sentinel and Democratic Advocate during the 1880s and 1890s.

By July 15th, most farmers had harvested their wheat, cut their first hay and felt their corn was growing nicely. School was out. Peas had been picked and perhaps canned. It was too early to worry about peaches, apples, tobacco and tomatoes…it was time to relax.

Baseball was a big draw in all parts of the county and competition between local teams often got very intense. Some teams traveled far and wide for games. “The Westminsters go to Woodberry to-day to play a return game with the club there. On the 4th of July the Westminsters will play the Pastimes at Oriole Park, Baltimore. Some time in July the club will take a week’s trip to Harrisburg, Williamsport and Lockhaven, Pa., and play about four games.” “The Westminster Base Ball Club defeated the Baltimores yesterday by a score of nine to seven. From all reports it was a well-earned victory. The Westminster nine has an unusually good record this season, and this big triumph only the more clearly shows the excellence of its material.”

“The boys tell a joke on Nicholas, the Westminster catcher, to the effect that if the Westminsters get defeated his better half will not give him any supper on that day.  Consequently, when the tide seems to be against the club, it is often heard on the grounds, ‘Reddy hasn’t lost any suppers so far, and is not likely to, unless much stronger clubs come here.’” Local author Dan Hartzler has published an in-depth look at the subject in Carroll County Baseball: Semi-Pro and Amateur – 1860-1999.

The Woodbine correspondent for one paper reported, “The base ball craze is in full blast in this section and the young men could spend their time just as well dancing with the girls, but we would advise the young to drop the bat and the dance and betake themselves to the Sabbath school where inspiring strains of song will lift by faith the soul away to sip the pure waters of life from the limpid stream that meanders from the fount of God.”

Religion did play a part in summertime activities, especially camp meetings and church picnics (or pic nics as they were sometimes spelled). In August 1891 it was reported, “Carroll County went to camp last Sunday, or at least about two-thirds of the population did, and about ninety percent of it was not interested in the religious services. Three camps were in progress in the county – Mt. Airy, Linwood and Warfieldsburg camps – and one just over the border, at Emory Grove [in Glyndon].  The attendance at all was unusually large. At Mt. Airy from ten to twelve thousand people were present, at Linwood about 3,000, and at Warfieldsburg probably about 2,000. At most camps the weather, which was scorching hot, the crops and politics were the leading subjects of thought and conversation, and as another diversion a terrific fight occurred at Mt. Airy camp, participated in by a number of persons, most of whom have cut heads and bruised faces as reminders…”

People usually arrived at the camps by train, stayed over several nights in tents and listened to preachers, but they might also attend for a single day. One Sunday in July 1880, five trains ran from Westminster at various hours to carry people to the Linwood camp meeting which was sponsored by the Church of God and held in the grove of Moses Haines, near Pipe Creek Station on the Western Maryland Railroad. Meals could be bought at reasonable rates from a “boarding tent,” and sleeping tents could be rented.  In 1887, preaching at the Linwood camp meeting was deemed “of an excellent character, spiritual and edifying to the Christian. The best of order prevails.” Some camp meetings were obviously more successful than others at crowd control and spreading a religious message!

On July 15th and 29th we’ll look briefly at horse racing, jousting tournaments, dances and other local activities as well as explore the County’s role as host to people escaping the city heat. 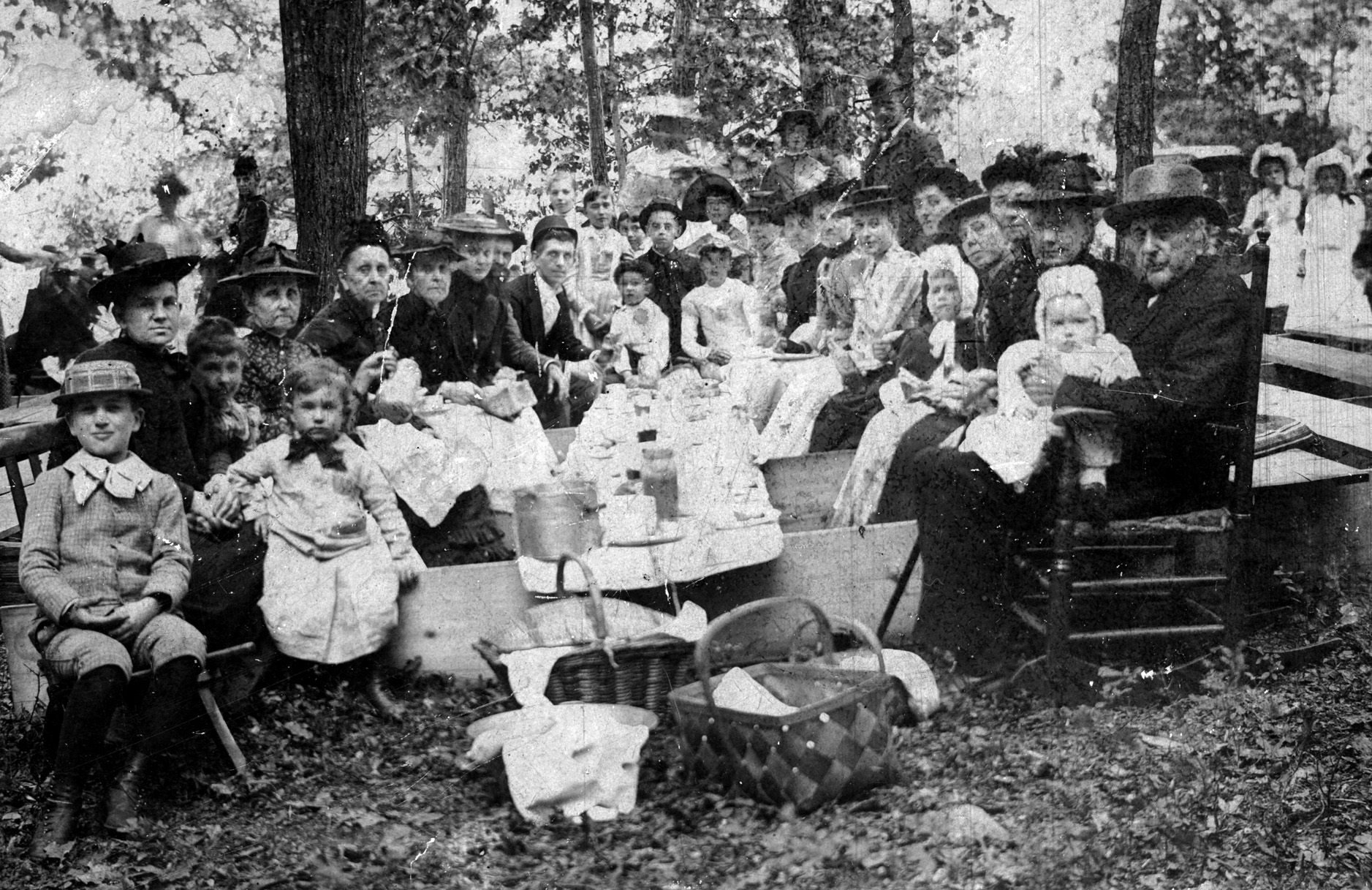 Photo caption: This charming old photograph was taken at a church picnic. Note the formal attire of various participants. Although undated, it appears to have been from the late 19th century.