On June 23rd and 24th, Carroll County will commemorate the 144th anniversary of Corbit’s Charge, a short but important battle which occurred in Westminster on June 29, 1863, between J.E.B. Stuart’s Confederate cavalry and a small contingent of Delaware cavalry.   At the time of the engagement, Philip Fisher of Columbus, Ohio, was in town on business and brought along his granddaughter, Nellie.  Several weeks later he wrote his wife a fascinating letter with details of what they had experienced during the turbulent twenty-four hours of June 29-30.  The Historical Society of Carroll County owns a copy of the letter, part of which is reproduced below:

What, think, dear Sarah, of little Nellie and I being on the margin of a furious battle in the streets of Westminster.  The street runs nearly east and west – Mitten’s Hill is at the east terminus.  The Baltimore road runs directly over.  At the base the Washington road obleaks (sic) southeast.  On Monday, 29th of June, two companies of cavalry from the state of Delaware, stationed at the west end, learned that a small squad of Rebel cavalry, headed by young men, sons of gentlemen of this town, had engaged shewing [shoeing] for twenty-five horses.  The Delaware cavalry with swords drawn rushed through the street.   When the front column reached the foot of the hill Steward’s (sic) cavalry from concealment in the Washington road, dashed into the street.  First quick and violent firing, each besides revolvers carry short guns of arms length.  Then flashing of sabers as they were raised high in the light of the sun.

When the battle commenced, Nellie and a number of young misses assembled at our door, ran into the street screaming piteously.  Then to the pavement, again to the street – back to the pavement, wringing their little hands, weeping with the greatest expression of sorrow and alarm.  First came the horses at top speed, that left their riders on the battle ground.  Then, outnumbered many to one, over ground on which they had advanced, came the Union troops.  The advance of the victors cutting and slashing – and the rear guard of the retreat looking over their shoulders, warding off as well as they could the terrible blows struck with force as if to cleave man and horse.

The relic of the decaying old Union Church, filled with wounded, the large graves in the crowded yard, showing fruits of battle.  Two stakes at the head of one, less than others, tell that two Rebel lieutenants repose in the same grave.

From the time of the retreat until eleven o’clock at night Steward’s cavalry in columns eight deep marched through town, large trains of artillery, one hundred and seventy-five wagons, marked US, captured near Washington City.  The daring look, the great number, the ease with which the Rebels sat and managed their race-like looking horses gave me for a time a melancholy foreboding.

Early next morning, whilst Steward’s pickets still paraded the street, from the Washington Road, as driven from the wings of the wind, came Pleasanton’s Invincibles.  Then race as if who first could get to Gettysburg.  It was amusing to see the prisoners caught, and the bridles taken out of their hands, swing their arms over their heads hurrahing for the South.  During the Rebel march through town many of the officers dismounted at the hotel and crossed to our pavement to receive the smiles and congratulations of their friends.  Nellie dried her tears, put on smiles, shook hands and received handsful of buttons cut from the rusty gray frocks of distinguished men.

Scare had the last of Pleasanton’s cavalry passed out at the west end until from that end came twenty-five thousand infantry and artillery of the Army of the Potomac.  Next west of our residence is sister Mary’s with large trees.  As the front of the army advanced to this spot a distinguished looking officer directed the bands to halt under the shade of the trees where they gave us music for hours.  Nellie, smiling and shaking hands and kissing some of them, received as many buttons as the day before…

Next weekend’s commemorative activities will take place on North Center and Court Streets in Westminster.  In addition to a Civil War encampment, there will be artillery demonstrations, a cavalry charge, period music Saturday night and Sunday afternoon by bands in costume and assorted other activities.  All events are free.  Consult this newspaper during the coming week for more details or visit the website www.pccwrt.addr.com for pictures of former Corbit’s Charge commemorations plus a timetable of this year’s events. 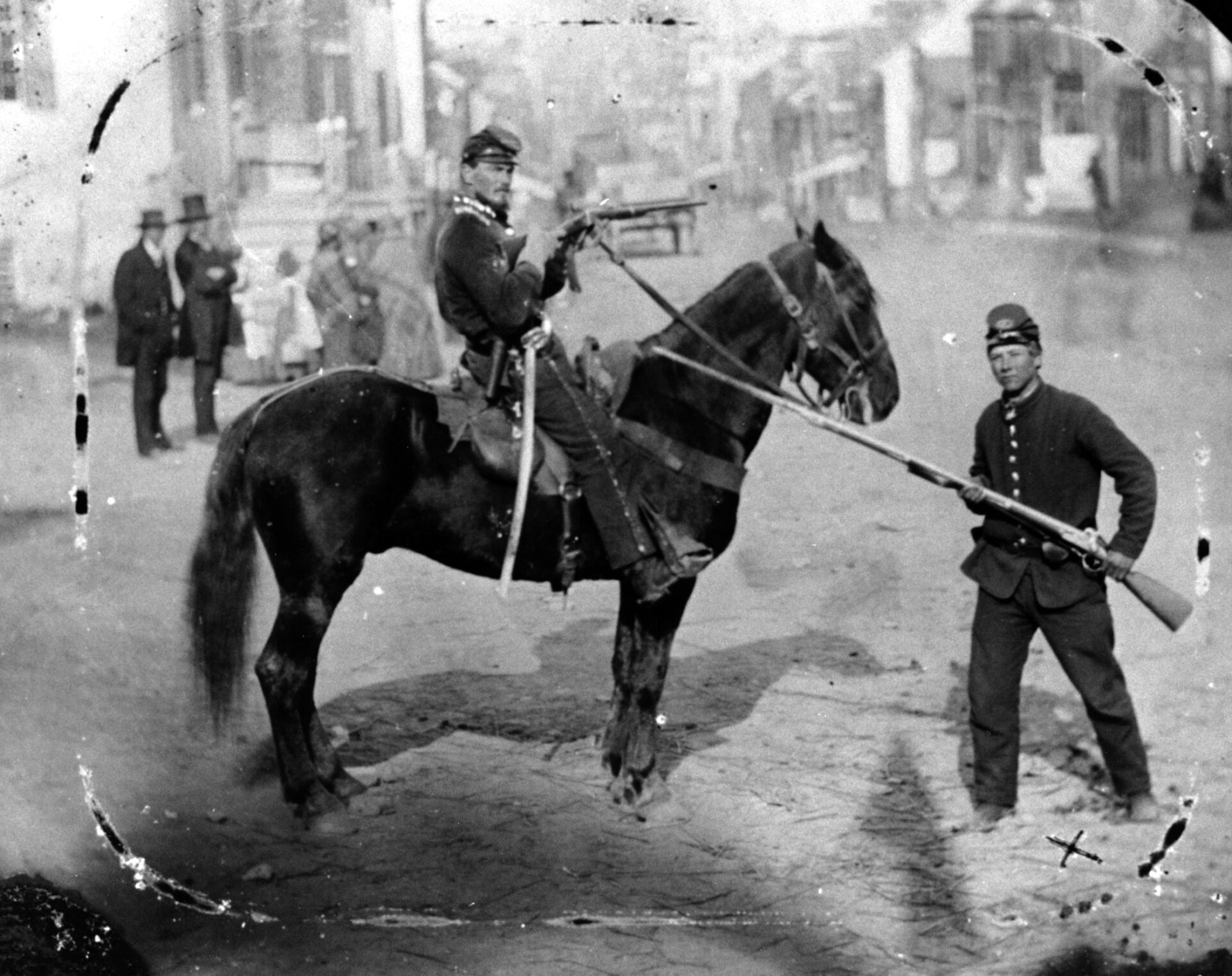 Photo caption:  An unidentified member of the First Delaware Cavalry sits calmly on horseback along Main Street in Westminster unaware his unit will soon be engaged in combat with advance elements of J.E.B. Stuart’s Confederate cavalry on June 29, 1863.