This is June – a month for many weddings.  On June 11, 1898, Westminster’s Democratic Advocate included a column that shared New York wedding fashions with young women of Carroll County.

For wedding gowns, satin is almost the exclusive choice, and for trimming, the selection lies between fine lace or chiffon, the latter being preferred in case of quite youthful brides, and the two are not unfrequently combined with very pleasing effect.  Necks are high, as a rule, though some few brides have worn low necks, but such style is not considered good form.  Sleeves, of course, are long, and the great partiality for lace sleeves induces their use, but some light foundation is placed below.  Mousquetaire [buttoned] or tucked satin sleeves are seen and elsewhere tucks are much employed because so fashionable in other dresses.

Corsages [bodices] are sometimes made tight, but an appearance of fullness is given by garniture, nor would a full blouse be thought appropriate, so that in general, medium outlines are preferable.  Trains, either round or square, are of all lengths, from such as merely suggest the appendage, to an extreme example that rested on the floor, a distance of four yards.  The veil is of tulle or lace, oftener, by far, the former, and in such cases is worn over the face until after the ceremony.  Orange blossoms are most used, but lilies of the valley are in considerable favor.

Bridal sets [usually a chemise, nightgown and dressing gown] begin at $12 for the three pieces and run up to almost fabulous prices, but in general, the leading shops do not exceed $50 per set.  Ribbon and lace are the trimmings employed, and nainsook [fine cotton] is the material, though in sets higher priced than those quoted, it is replaced by linen lawn, and expense increases according to the quality of lace and the addition of embroidery, which, when done by hand, becomes very costly.  Some gowns have very large collars, all have falls of lace over the shoulders and occasionally a jacket front appears.  To meet the tastes of refined customers, moreover, these dainty garments, before being sent home, are delicately perfumed, and for such purpose nothing is found so choice as Murray and Lanman’s Florida water.  Every bride of position or well informed traveler has also in her outfit a supply of this well-known toilet water, since, after exposure in the sun or during the fatigues of a journey, its refreshing qualities are beyond compare.

Few Carroll County brides of the late nineteenth century were likely to have followed these fashions too closely.  Fannie B. Roop, whose 1890 marriage certificate to Milton Snader accompanies this article, was wed at Christmas rather than in June, and likely wore a “best dress” rather than the kind of dress described above.  Christmas was also popular for weddings because it was “a time for the reunion of the sundered household band.  Wanderers return to the parental roof, and fathers and mothers, sisters and brothers, meet again around the family hearthstone and at the family board…”

The following report on the Roop-Snader wedding from the December 27, 1890 Democratic Advocate, offers a glimpse into local marriage customs:

Tuesday last, 23d inst., witnessed the scene of a very pretty wedding at the residence of Mr. David J. Roop, near Uniontown.

At just 1:30 p.m., the bridal party entered the parlor, preceded by the ushers, Mr. C. E. Roop, brother of the bride, of Baltimore, and Mr. Hamilton Snader, of Waynesboro, Pa., brother of the groom.  Miss Maggie Myers of Frizellburg, was bridesmaid, and Mr. Charles D. Bonsack acted as best man.  The ceremony was performed by the venerable Elder Solomon Stoner, of Uniontown, assisted by Elder David D. Bonsack, an uncle of the bride.

After the ceremony was performed the guests were invited to the dining room, where all did ample justice to a sumptuous repast.  There were present about one hundred and thirty-five guests…”

Those guests included prominent Carroll and Frederick County families such as the Roops, Royers, Bailes, Sullivans, Pearres, Geimans, Englars, Myers, etc.  The newspaper reported “the presents were numerous, varied and handsome.”  David Roop’s home must have been filled to capacity on that happy wedding day. 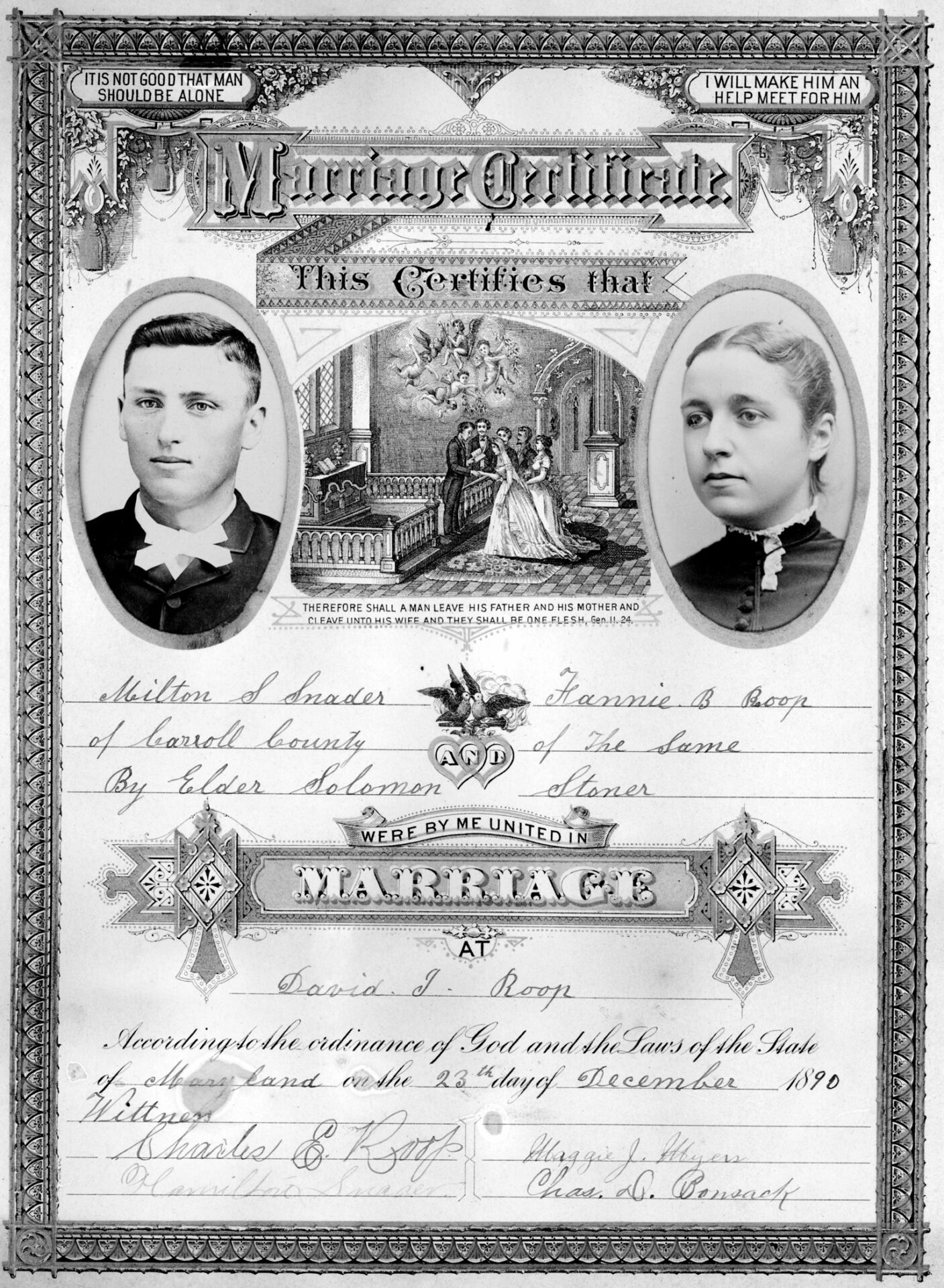