With Memorial Day almost here, it seems fitting to share the stories of five Civil War veterans buried side by side in Mary Shellman’s lot at Westminster Cemetery.   Mary, who grew up during the war and began Westminster’s Memorial Day tradition in 1868, purchased the lot in the late 19th century as a way “to keep soldiers from pauper burials.”

Service in the Union cause was almost the only thing the five men had in common.   Some died young, some as old men.  Two were born in the U.S., three foreign-born.  Some were amputees, others wounded in mind rather than body.  Mary wrote of them in 1936, “They were all good brave soldiers but their other records were not much.”

Private Robert Clark was the first of the five laid to rest.  He was serving in a Maine infantry regiment headed toward Gettysburg in late June 1863 when he came down with typhoid fever.  An ambulance delivered him to the McAllen Hotel in Westminster where he was given a bed.  Thirteen year-old Mary Shellman tried to reduce his raging temperature by fanning him.  In spite of her efforts, he succumbed on June 30th and was buried in Westminster Cemetery.  Concerned citizens arranged to have a marker erected on his grave and some years later Mary bought the ground around it.  Twenty-three year-old Clark, born in Canada, left behind a nineteen year-old widow and young son living in the northernmost reaches of Maine.

In 1864 William Frazier, a 32 year-old Westminster jeweler and watchmaker was buried beside Clark.  Mary Shellman remembered, “In a drunken quarrel one night he fell down the steps and broke his neck.”   Frazier joined the 7th Maryland Volunteer Infantry in August-September 1862 but by December had deserted the army.  His headstone was not government-issued, probably because of his deserter status.  Of the five soldiers, he was the only one native to Maryland.

Lt. Orville T. Andrews died in 1885 aged about 42.  When the Civil War broke out, Andrews was in his late teens.  Though living in Tennessee, he joined an Illinois infantry regiment and before he turned twenty he lost a leg at the Battle of Shiloh.  The army promoted him to 2nd lieutenant and discharged him.  How he ended up in Westminster is unknown, but he appeared in the 1880 census as an unemployed bookkeeper.   Mary Shellman wrote a friend, “You surely remember Capt. Anders [sic] with his artificial leg which he used some times to pound against the wall of the Main Court [Hotel].  People passing would say, ‘Poor old Cap was on a spree last night.’”  In spite of Mary’s recollection, his obituary says, “He was a man of many good qualities and above the average in intelligence.  His remains were buried in Westminster Cemetery on Monday with military honors by Burns [G.A.R.] Post of this city.”

Malachi Buckley was the fourth soldier buried in Mary’s lot.  In 1855, sixteen year-old Malachi left Ireland to seek his fortune in America.  He found work in northern New Jersey as a farm laborer, then crossed the Hudson in 1861 to enlist in the 69th New York Infantry, part of the famous Irish Brigade.  Buckley, however, didn’t have “the luck of the Irish.”  When his regiment saw action at the bloody battle of Antietam in 1862, he lost his forearm.

Buckley died in Westminster in 1894 at 54.  Why he was living in Westminster is puzzling.  Mary Shellman recalled, “They were going to take him out to Potters Field without even a word of prayer.  I heard of it & got old Mr. Crouse to have a prayer & let them bury him in my lot.”

The last of the soldiers to be interred was Private Ernest Kohler who died at the Carroll County Alms House in 1907 at the age of 85.  He was born in Germany, arrived in the U.S. in 1850 and signed on as a soldier in the 57th New York Infantry in 1861, perhaps because it offered regular pay and a sense of belonging.  During the Battle of Fair Oaks, he received a leg wound.  On the long march from Virginia to Gettysburg, he collapsed beside the road near Uniontown from sunstroke and/or his old injury.  He never rejoined his unit.  People later described him as “weak brained” – possibly a result of sunstroke.  After living in a shanty in the countryside, he eventually sought refuge at the Alms House.  Thanks to Mary Shellman, he was not buried in Potter’s Field there, but laid to rest beside the other veterans.  It wasn’t until 2006 that his grave was finally marked with a headstone.

General William T. Sherman was supposed to have said, “War is hell.”  Surely these five soldiers knew what he meant.  Heroes they were not, but their stories are probably very typical of many other veterans remembered on Memorial Day.

Mary Ann Ashcraft is a volunteer in the Historical Society of Carroll County Library. 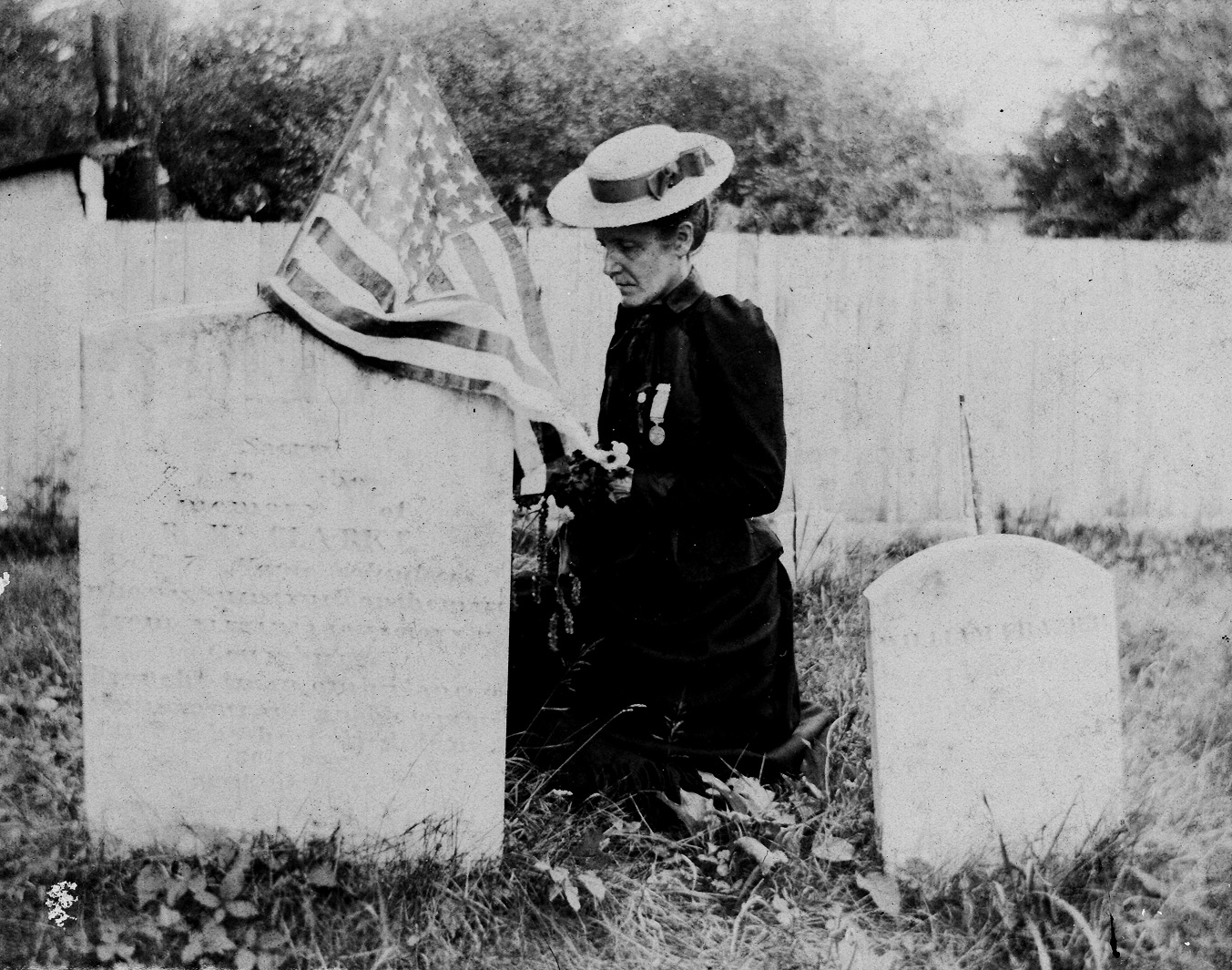 Photo caption: In this c. 1890 photo, Mary Shellman decorates the grave of Private Robert Clark who died June 30, 1863, and was buried in Westminster Cemetery. From the collection of Historical Society of Carroll County.