Fifty years ago, a drive along Sam’s Creek Road west from Route 31 would have brought you to McKinstry’s Mill on the western edge of the County.  There you might have bought a bag of freshly roasted peanuts from the Misses Mildred and Dorothy Zumbrun who owned the old grist mill and eaten them as you watched Sam’s Creek flow slowly by on its way to join Little Pipe Creek near Union Bridge.

Today it is still satisfying to make this journey although you won’t find peanuts for sale and the Misses Zumbrun were laid to rest long ago.   What you will see now are the fascinating remains of a small community which helped power the economy of central Maryland for nearly 200 years.

George Pusey recognized the potential for building a grist mill on Sam’s Creek in the 1760s.  By 1794, his mill was one of 30 operating in what today constitutes Carroll County.  As production of corn and wheat expanded, more and more mills were built along the myriad waterways flowing into the Monocacy River.  In 1862, the County boasted 98 operating mills.  While Sam’s Creek starts as a trickle near the center of the County, it becomes a very robust stream by the time it reaches McKinstry’s Mill.  In the 19th century, there were a number of other mills also using its waterpower to grind grain or saw lumber.

In 1814, Evan McKinstry bought Pusey’s mill for $10,000.  Several generations of the family operated the mill over the course of the next one hundred years.   The McKinstrys were prominent and respected millers as well as prosperous businessmen, making money even during the Civil War when the flour market was flat.

Samuel McKinstry, grandson of Evan, replaced the old mill he had inherited with a 2½ story new one in 1844.  That building exists today although it is badly in need of major repairs.  At one end of the building farmers could load and unload their wagons under the protection of an overhang and lucky children might get a ride up into the mill as well. Samuel also improved the millpond and dam.  The pond, covering about 20 acres, became an ice source and place for skating in the winter; during warm weather it was large enough for fishing and boating.  Today, trees and brush flourish on parts of the dam breast and grow in what was the pond.  None of the water from Sam’s Creek flows into the pond or through the mill any longer.

Shortly after building his new mill, Samuel constructed a handsome brick home for his family across from the mill.  That still stands and is in excellent condition.  The village actually contains three homes which belonged to various millers – an ancient dwelling on the hillside across Sam’s Creek reputed to have been Pusey’s, a yellow house which belonged to the early McKinstry millers and the large home Samuel eventually built.

Samuel McKinstry not only was a successful miller, but for over 45 years he served as postmaster of the small community.  In 1883, he turned the mill over to his son, Mordecai, who owned it until 1915 when Willis Zumbrun bought it.   The mill ceased operation in 1950 upon the death of Thomas Rinehart Zumbrun.   His sisters, however, continued to open and close the mill office daily and sold their roasted peanuts there for a number of years.

In its heyday, the village of McKinstry’s Mill boasted a small general store in addition to its post office.  Local children attended Priestland School nearby.  The lovely Carroll and Frederick countryside was home to many very prosperous farmers.   A drive on back roads through the area offers glimpses of their handsome houses

Only four mills were operating in all of Carroll County by 1950…and then there were three.  A visit to this little community is still a real treat even if the mill is crumbling and the millpond is dry.  It takes very little imagination to picture the area one hundred and fifty years ago.  Park your car behind the mill near the creek, nibble from a bag of roasted peanuts, and spend an hour walking through history. 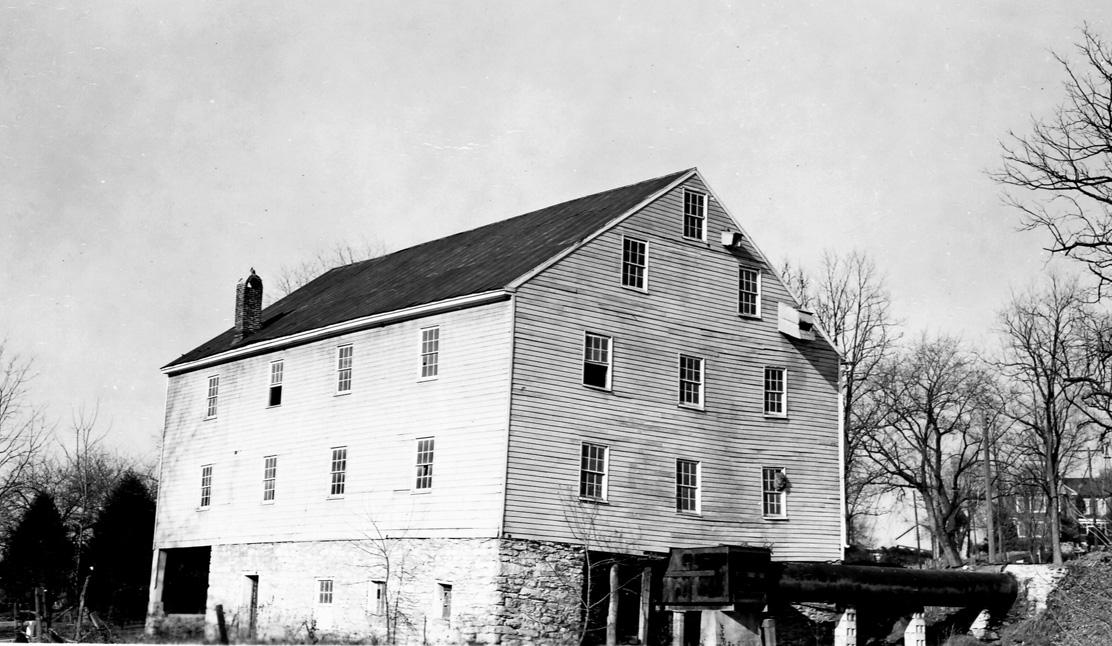 Photo caption:  Samuel McKinstry’s mill, built in 1844, operated until 1950.  In the 1860s, Carroll County supported almost 100 mills. From the collection of the Historical Society of Carroll County.