In the early summer of 1898, Carroll’s citizens, especially bicycle riders and racers, were filled with excitement over an event to take place at the Pleasure Park, a newly built horseracing track with grandstand one mile north of Westminster on the road to Littlestown.   County newspapers announced, “Riders from all parts of the country will be requested to compete for the handsome and valuable prizes offered…There will be races for all classes of riders, including multicycle races for two, three, four, five and six-seated machines.  These monster affairs can reel off miles in a minute and thirty seconds with apparent ease.  The track will be put in fine condition, and no doubt records will be broken.” “It is estimated that at least fifteen hundred wheelmen will be present…”  “Some of the speediest riders from Philadelphia and Washington will enter for the prizes, which aggregate $300.00…”

The June 25, 1898 edition of the American Sentinel announced the much-anticipated race as follows:

Thursday, the 30th day of June, will be the greatest day among cyclists in Carroll County that has ever occurred in its history.  The great Bicycle Race Meet under the supervision of the Cycling Ramblers of Westminster, the third oldest club of its character in the State, and the leading bicycle organization in Carroll county, will take place on that day.  Carroll county has between four and five thousand riders of the silent steed, and with the influx of visiting wheelmen from Baltimore, Hagerstown, Frederick, Hanover, and elsewhere, who have already signified their intention to participate in the meet, it will make the occasion a red-letter day in local history and one long to be remembered by the citizens of Carroll.

A meet of this character will certainly be a novelty to the majority of our citizens, as heretofore we have been denied the pleasure of holding similar events of such magnitude in our beautiful city.  The chief reason for this has been the lack of a suitable racing track and the necessary accommodation for the public.

The Cycling Ramblers, however, have entered into the spirit of the meet, and with untiring energy and with the cooperation of progressive citizens, have overcome every obstacle.  Every place of business in Westminster will promptly close at 12 o’clock noon on the day of the meet, and the city will be put in holiday attire in honor of the event.

The people of Carroll County and the citizens of Westminster will demonstrate conclusively that they have truly earned the right to be called the most hospitable people in the State of Maryland.  The bicycle suit worn by the visitor on that day, will be the “open sesame” to the cordial hospitality of the city, and all will be accorded a rousing reception.

The members of the club who have charge of the details of the meet have worked with indefatigable energy, and with splendid results.  The race track is being put in perfect condition; the quarters for the racers, their trainers and pace makers, have been provided for; while every accommodation in respect to the visiting wheelmen’s comfort and entertainment has been attended to in detail.  The Carroll County Band, the pride of every Carroll countian, with its full quota of members, has been engaged for the day, and will not only take part in the parade and be one of the features at the track, but will give an open air concert from 8 to 10:30 o’clock at night.  Railroad facilities have also been provided for, and excursion rates from Baltimore will prevail, costing $1.00 for the round trip.  A special train for the excursionists will leave Westminster at 10 o’clock p.m. which will give the visiting wheelmen ample time to see the “sights” of our city.

Valuable prizes for the winner in the different events have been selected carefully by the committee in charge.  These prizes are not only intrinsically valuable, but are appropriate and beautiful in design…

In the contest for these prizes, some of the fastest amateur riders from Washington, Baltimore, and York, Pa., have entered, and magnificent displays of speed will be witnessed.

No records were broken that afternoon, perhaps because of the “extreme heat” reported later.  The best time turned in was for the mile tandem, amateur, for Carroll County riders – just over 2.14 minutes.  First prize for the winner of the twenty-five mile paced open race was a diamond ring valued at $35.00.   Riders and spectators no doubt enjoyed the affair from beginning to end. 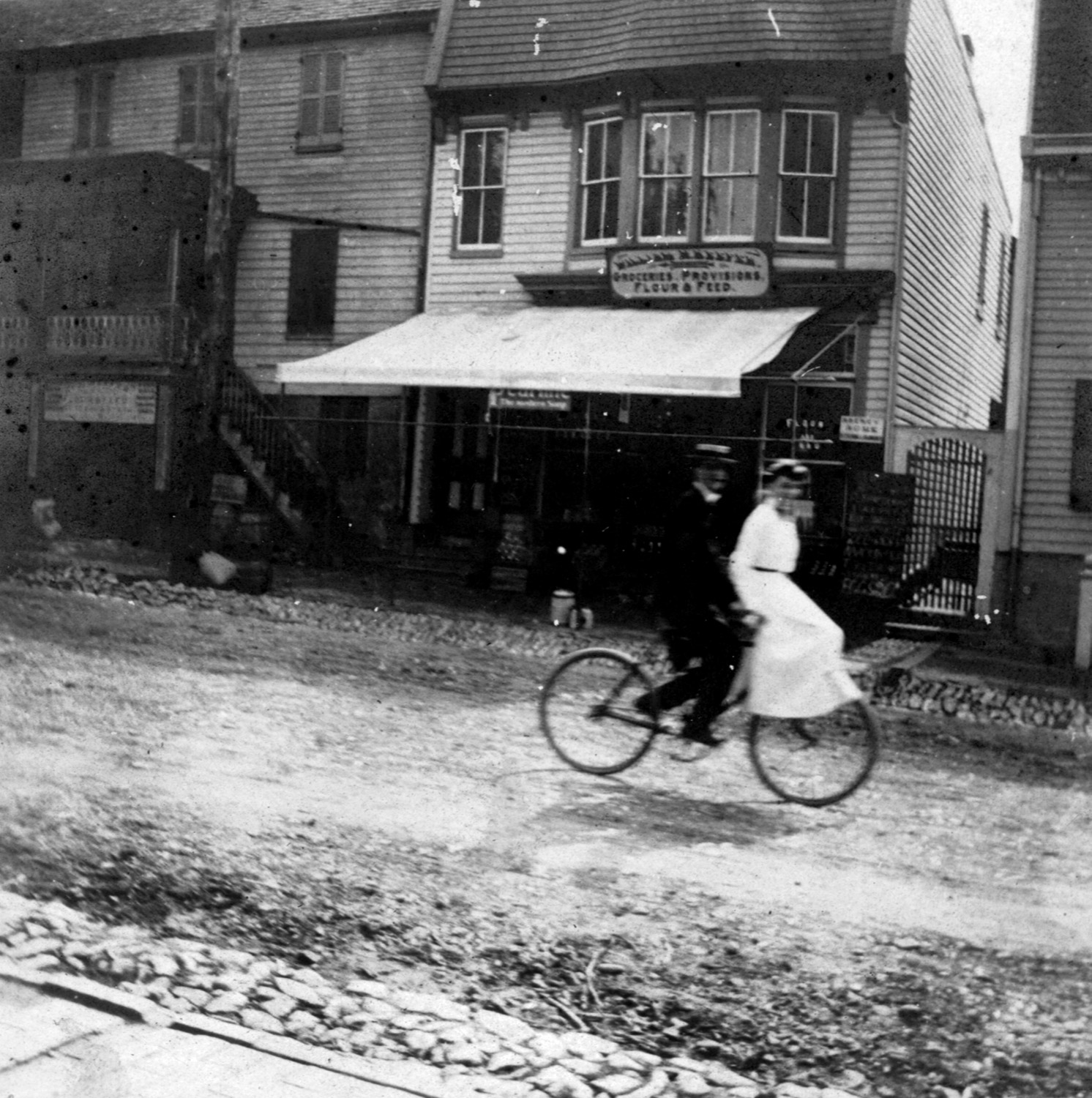 Photo caption:  Perhaps couples like this one seen in an early twentieth century photo pedaled to the Pleasure Park north of Westminster for the Bicycle Race Meet in 1898.  This photo was taken in front of William Keefer’s Groceries, Provisions, Flour & Feed store at 86 East Main Street in Westminster.  From the collection of the Historical Society of Carroll County.