There was so shortage of good times to be had during Carroll County summers in the late nineteenth century.  Even if you never traveled more than a few miles from home, you could participate in plenty of fun whether during the day or in the evening.

In June 1885, the Sykesville correspondent of the Democratic Advocate newspaper described a glorious picnic given by a Mr. Zimmerman for “the benefit of the children of the neighborhood.”

Wednesday, the 10th, was the day chosen.  The invitation was general and given out in the churches at Freedom and St. James, Howard County, by the ministers in charge, the Sunday previous.  At the latter church it was “Children’s Day.”  The children accepted the invitation and gave Mr. Zimmerman a vote of thanks.  The ground where the picnic was held was in the grove of Zimmerman & Schultz, immediately in the village, which had been greatly beautified by Mr. Schultz.  About 10 o’clock the Taylorsville Band arrived and took position.  It needed but one tune to arouse the people.  Children were hurried into their Sunday suits, and in a short while hundreds could be seen wending their way to the picnic ground.  By 12 o’clock four hundred children could be counted, and by 3 o’clock in the afternoon fully eight hundred people were enjoying the hospitality of Mr. Zimmerman.  The carpenter shop was used as a storehouse, and was in charge of a committee of ladies and gentlemen selected by Mr. Zimmerman to deal out the good things to the children.  There appeared to be no end of children and good things, and the committee had their hands full.  There were choice sandwiches by the hundreds, barrels of cake and candies, ice cream, bananas and boxes of oranges, peanuts and pickles, and ice-cold lemonade by the barrelful.  The children filled their paunches, the old people their pockets, and the multitude was satisfied.  Mr. Zimmerman, who was early on the ground, is a jovial bachelor of fifty summers or more, had a pleasant smile and kind greeting for all, and declared it was one of the happiest days of his life.  He was the recipient of many floral gifts, among them a choice bouquet from Miss Susanna Warfield, of “Groveland.”   Rev. P. P. Flournoy and Rev. James Cadden made short and appropriate addresses to the children.  The band discoursed sweet music at short intervals and all enjoyed themselves.  Zimmerman’s picnic will long be remembered by the children and parents for many miles around.

Summer evenings often included a variety of dances.  In 1885, Norris’ Pavilion in New Windsor was finished and dedicated with a grand ball.  A newspaper correspondent reported,

Before the ball opened Mr. Norris made a few well-timed remarks, which were greeted by the audience with great applause, after which the band struck up the promenade march and quadrille, and the youngsters tripped the light fantastic toe.  The company was composed of the elite of the neighborhood, as well as some visitors, representing Philadelphia, Baltimore and Florida.  The ball continued until a late hour, and was much enjoyed by all present.  This is the first pavilion which has been erected in this county, and consequently New Windsor is one ahead in civilization.  The building is also used for a skating rink.  It is the intention of the proprietor to have several festivals and balls during the summer season.

Another popular form of evening entertainment was a “German.”   According to an old dictionary, this was a term for a kind of dancing as well as a social event.   In 1891, Westminster was the scene of such an affair:

The second german of the series was held on Thursday evening at Winchester Place.  Dancing began at 8:30 and continued until 10:30 when the German was commenced, the first figure being an introductory one, and was led by Miss Belle Brady, of Harrisburg, Pa., and Mr. W. Reynolds C. Neale, of Westminster, who also led the succeeding figures, which were the “broken basket,” the “odd number,” a cheat, and twining the tarlatans.  The figures were all very pretty and were well selected, being neither complicated nor tiresome.  The usual musicians played and their music as usual was excellent.

If one can judge from the first two germans held by the club, it can safely be said that the series will be a grand success, and under such encouraging circumstances the club should continue them during the winter.

Look for more old-time summer activities in the next “Carroll Yesteryears” column. 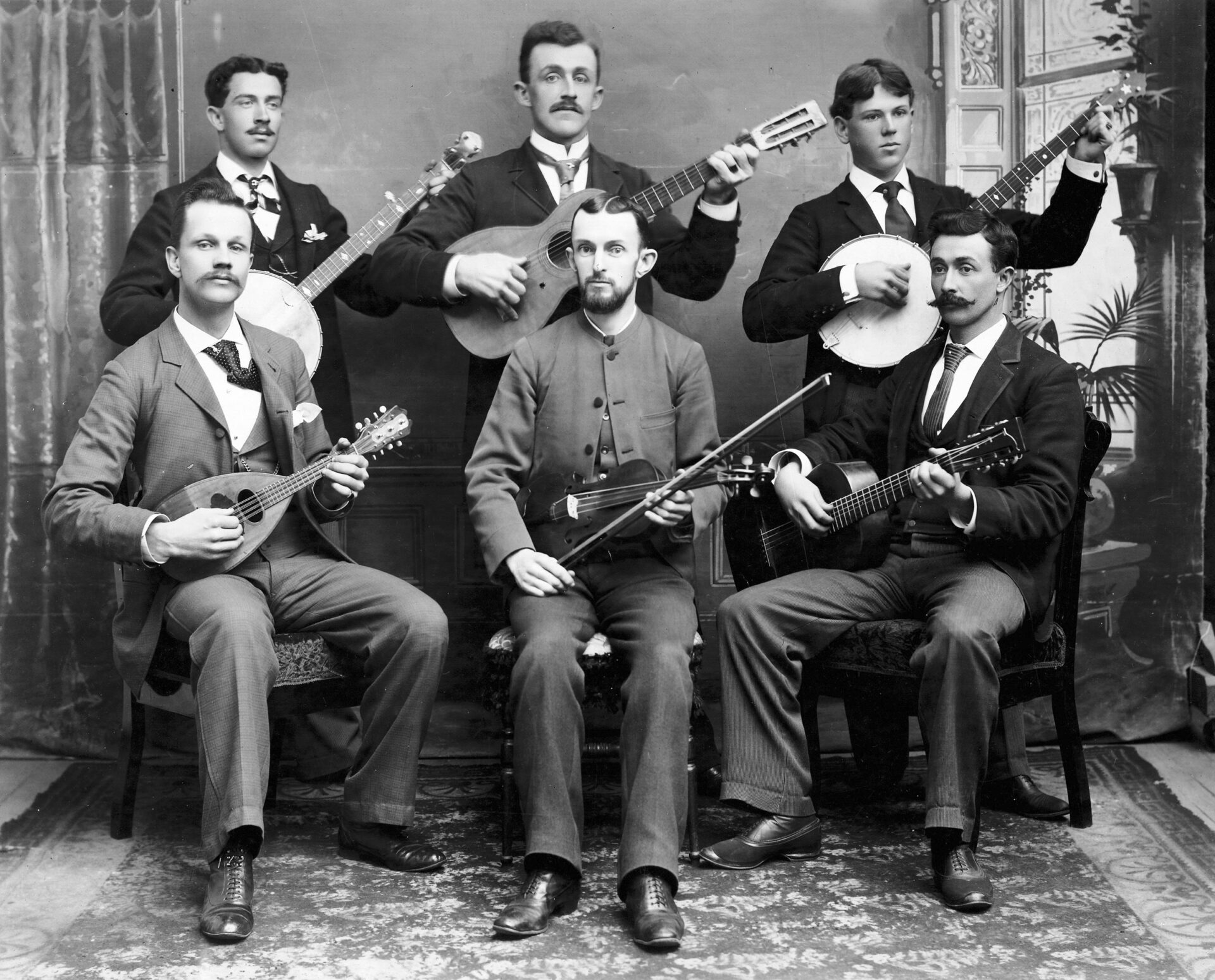 Photo caption:  Local musicians such as Professor Royer’s String Band, seen in this 1890s photograph, were probably much in demand for the dances and concerts taking place around Carroll County during the summer months.  Front row: Grant Hiltebridle, John Royer, “Doc” Hyde.  Back row: Hattie Hyde, Howard Englar, Herbert Getty.  From the collection of the Historical Society of Carroll County.