By Train or Bus, Carroll Countians Got On Their Way

Centuries ago, Native Americans living in this area traveled on their own two feet. Early settlers used horses for long journeys, but as the Indian trails turned into roads and turnpikes, carriages or stagecoaches carried passengers who wanted to leave the county. By the 1830s, the options for traveling increased thanks to the invention of the “iron horse” (locomotive) and spread of railroads.

Isaac Van Bibber described his journey on the relatively new Baltimore and Ohio Railroad from Baltimore to Sykesville in the early 1840s. “I entered the cars, and read and shook and grunted until I arrived at Sykesville.” The cost was $1.25, a princely sum at the time.

Soon railroads crisscrossed Carroll County enabling movement of passengers and freight east, west, north, and south. Farmers shipped milk and other produce to Baltimore markets. Freight and/or passenger depots sprang up in some of Carroll’s small communities along the tracks as well as in larger towns. Carroll became a mecca for visitors escaping the stifling summer heat of Washington and Baltimore. You can still see some of the buildings that served as inns in Sykesville, Mt. Airy, Westminster, and New Windsor. If people didn’t come for a vacation, they might come for a summertime religious camp meeting.

Trains served the county in other ways. They took local workers to Baltimore on a daily basis with Western Maryland Railroad (WMRR) schedules that began as early as 5:35 a.m. in 1878 or 5:05 a.m. in 1912. When Tidewater Cement Plant (the predecessor of Lehigh) began operation in Union Bridge about 1910, many laborers traveled here from Baltimore on the WMRR. Naturally, train service brought city workers home in the evening or sent tired and dirty cement plant employees back to homes in Baltimore. Residents of Woodbine, Mt. Airy, Hood’s Mill, Sykesville, and Marriottsville used the B&O to reach Baltimore for work or shopping.

Children often took advantage of trains to reach Carroll’s high schools in towns like Mt. Airy because their one-room neighborhood schools offered education only through the seventh grade. If you lived in Detour, you hopped the WMRR to school in Union Bridge. If you were African American and living in Sykesville, you might even take the B&O to Baltimore and walk to Frederick Douglass High School, especially if you had a free pass as Thelma Dorsey did thanks to relatives who worked for the railroad.

The B&O eliminated passenger service in Carroll’s towns by the early to mid-1950s and the WMRR must have done the same during the 1960s, but bus service to Baltimore was advertised in Westminster newspapers as early as 1915. For one dollar round trip, you could hop aboard in Westminster or Smallwood and reach the city in two hours. A one-way ticket was only 60 cents. Even as late as 1957, there was Greyhound service from a station on Westminster’s East Main Street.

By the end of the 20th century, trucks and automobiles moved most Carroll Countians and their produce anywhere on good roads. If you want to stretch your horizons today, you need an automobile or a friend with one. 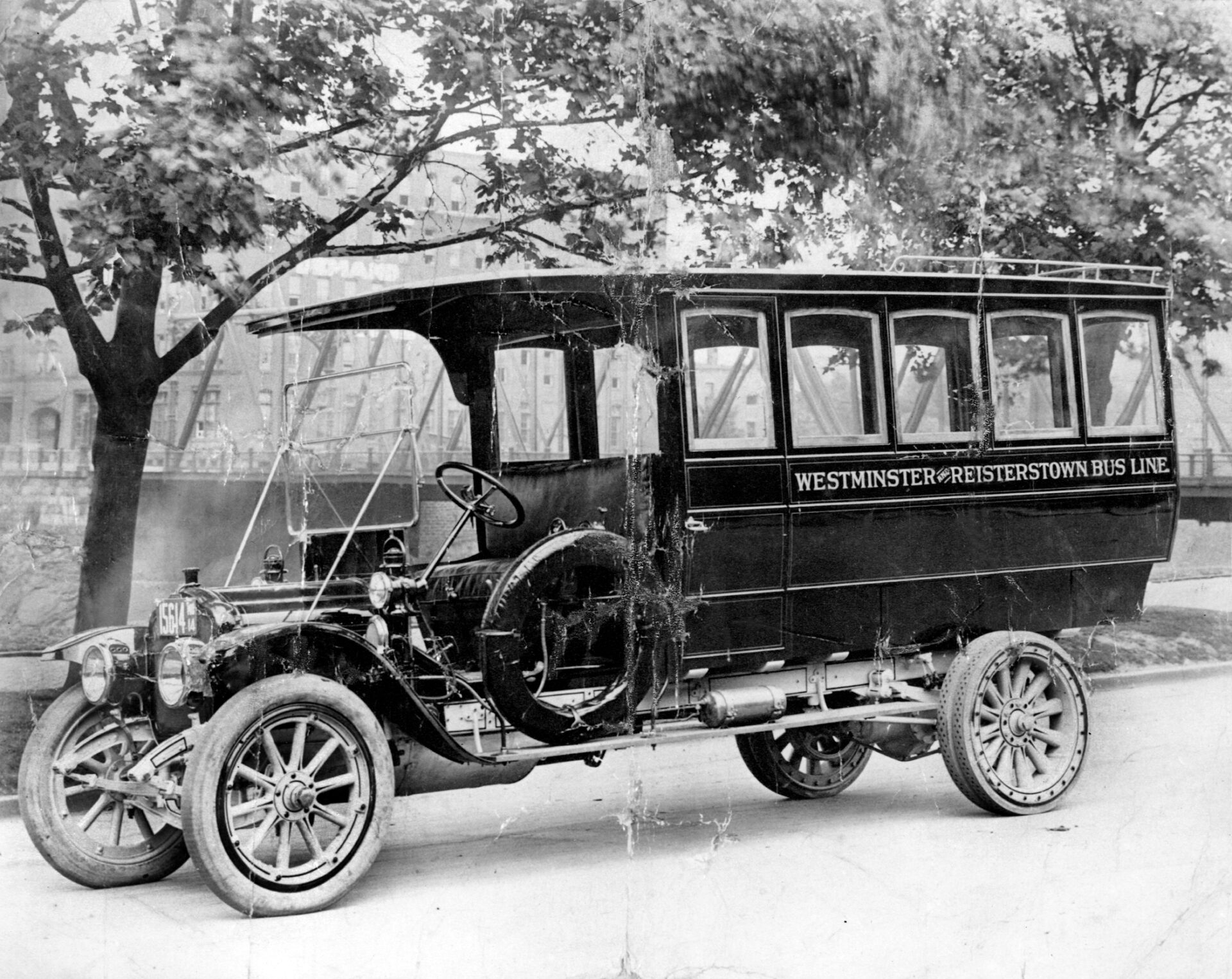 Photo caption:  Travelers in the 1920s who used the Westminster–Reisterstown Bus would have ridden in a vehicle like this one and probably stopped in Reese, Sandymount, and Finksburg on the way.