Carroll County has always had an agriculture-based economy, but some of the early settlers also recognized the potential of local iron deposits and made a number of attempts to extract iron ore and build iron furnaces.

Legh Furnace, one of the oldest in Maryland, was established near Westminster about 1765 by Englishman Legh Master, infamous for supposedly throwing one of his slaves into the furnace.  Iron ore was dug from deposits around his Avondale home, probably using slave and/or indentured labor, and smelted in the furnace on his property.  After only a few blasts it became obvious the iron was inferior and the ore “unproductive,” so the operation was abandoned.  During the mid 19th century the deposits were worked again, but this time the ore was sent elsewhere for smelting.

Elba Furnace was a much more successful operation built along the north bank of the Patapsco River just east of Sykesville in the late 1840s.  Quaker James W. Tyson smelted iron ores to make cast iron for car wheels for the adjacent B&O Railroad.  Using charcoal from local woodlands as fuel, and water and steam power, mines such as Springfield near Sykesville and Mineral Hill near Louisville supplied the ore.  Over a 33-week period in 1857, the furnace produced 965 tons of iron.  Just after it shut down in 1868, a flood along the Patapsco devastated the town of Sykesville and destroyed most of the furnace complex.  The lower portion of the granite stack, situated between the river and the CSX tracks, can still be seen from River Road when the leaves are off the trees.  No other furnaces operated in the county, but a great deal of local iron ore was shipped to Pennsylvania during the latter half of the 19th century and the first decade of the 20th.

Carroll’s iron deposits lay in two roughly parallel bands stretching across the county from southwest to northeast.  The western bands of limonite iron ores associated with limestone valleys began near Warfieldsburg, went through Avondale and passed north of Westminster toward Bachmans Mills, Ebbvale and Lineboro.  These deposits were mostly shallow and easy to mine.  The eastern band of hematite and magnetite iron ores associated with metamorphic formations began near Sykesville and continued through Louisville and Finksburg.  These veins were narrow and deep and had to be mined underground.

Key to the success of local mines was proximity to a nearby furnace or to a railroad by way of good roads or turnpikes so the ore could be economically shipped.  Besides transportation, a source of water to remove clays from limonite ores by washing was important.  The Bachman Valley Railroad, a branch of the Western Maryland, served a number of the mining operations between Ebbvale and Lineboro, but mines in other parts of the county were much further from any railroad.

The Schaeffer ore bank near Bachmans Mills showed great promise and was worked in 1907-08 by about 12 men who extracted more than 1,700 tons of ore over a nine-month period.  That operation was expensive, however, because the mining was chiefly underground and the ore, once at the surface, had to be hauled three miles to the Bachman Valley Railroad at Ebbvale.  During a financial panic in 1908, the mine closed.

Ore from many of the other mines was taken from the surface, leaving behind pits described as being 100-400 feet long, usually less than 100 feet wide and 20 to 70 feet deep.  During the time they were actively worked, it would have been hard to miss such distinctive features on the landscape.

In 1870, Carroll produced 18,300 tons of iron ore, second in the state only to Baltimore County.  The peak mining period seems to have been the last third of the 19th century.  Surveys of the quantity and quality of local ore done in the early 20th century showed plenty of potential for more mining, but promised railroads never materialized and huge ore deposits were discovered elsewhere.

The small iron mines of the East which served the country during its early years – supplying iron for Revolutionary War cannons and the first railroads – gave way to better sources in the upper Midwest and the mining scars across the countryside gradually healed.  Today you must search diligently to find any evidence of them.

Article contributed by Johnny Johnsson and Mary Ann Ashcraft.  Mr. Johnsson is an engineer and mining historian from Finksburg.  Mary Ann Ashcraft is a volunteer librarian at the Historical Society of Carroll County. 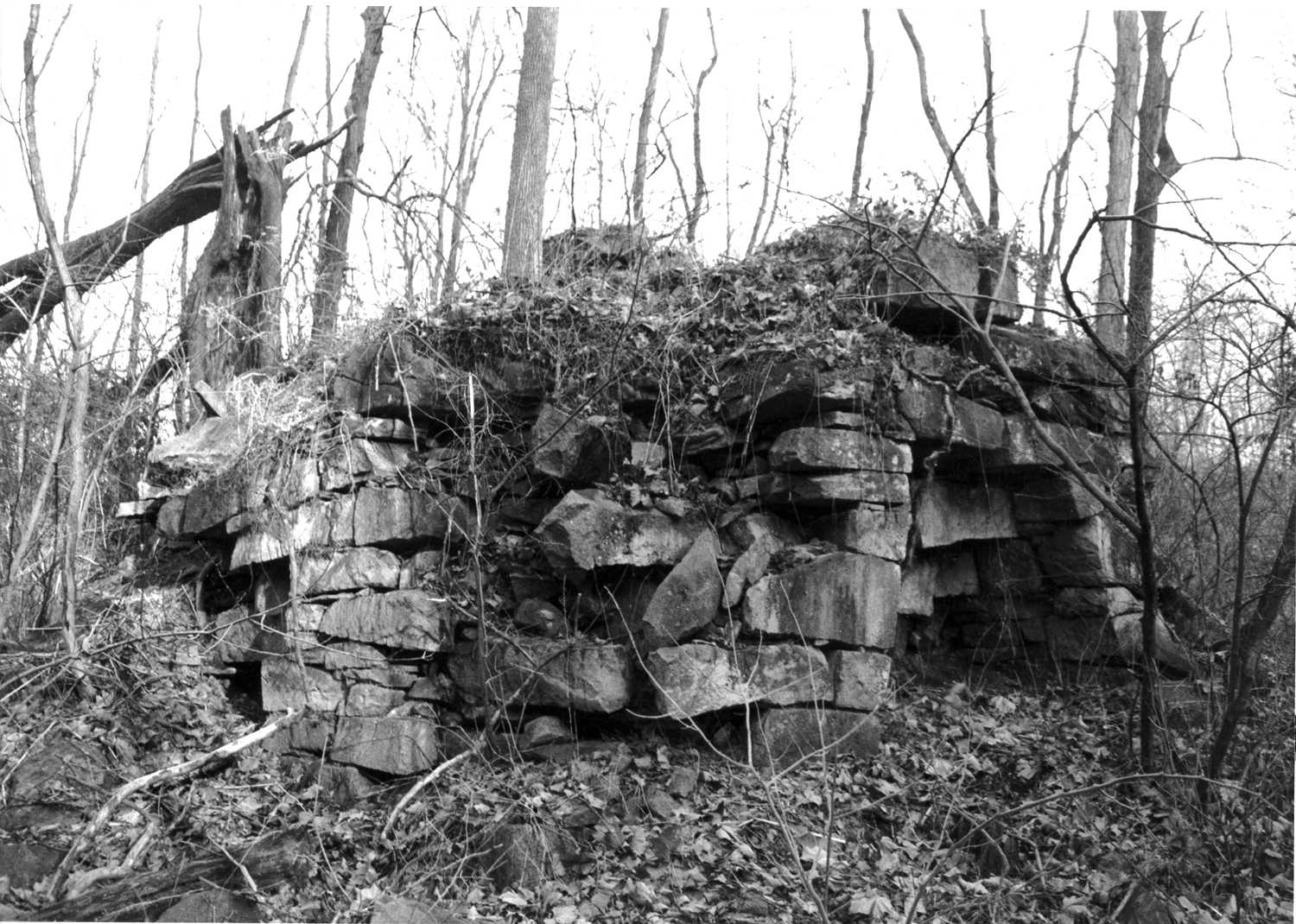 Photo caption:  Remnant of Carroll’s iron industry: All that remains of the stack of Elba Furnace near Sykesville. Courtesy of Johnny Johnsson.