I am amazed that we were able to accomplish so much, and possibly appreciate more now, than I did then, what we did….and Carroll County’s part was really wonderful – as a purely agricultural community, with no millionaires, its showing could be large only by all taking part; and all did take part; and we can modestly say that our work was not mean.  It is hard to believe today that but a little over two short years ago the people of this County thought only of self-denial for the benefit, not only of their own, but for suffering humanity wherever found.

Carroll County sent her sons gladly, over a thousand of them, to the front, but their prowess in service was equaled by the energy and sacrifices of their folks back home, and our children should remember that America, if she did or did not win the war, at least ended it, and this work was accomplished only by reason of the united support given it by her civilian population.

Early in the fall of 1918, President Woodrow Wilson turned to well-known organizations already involved in supporting the welfare of American troops to unite in a massive drive to raise $170,000,000.  The organizations included the YMCA, YWCA, Knights of Columbus, Jewish Welfare Board, and Salvation Army.   Maryland’s share of the drive was $1.5 million and Carroll’s portion was fixed at $33,500.   The campaign was scheduled for November 11-18, but no one knew the opening day of the drive would also mark the end of the fighting.  Steele wrote:

Sunday the tenth of November was devoted by all the churches to the campaign, their pastors speaking of its importance and urging their congregations to give it their support…On Monday morning at nine o’clock the campaign started.  All over the County farm bells rang, whistles blew, and immediately in every district the solicitors began their work.  The whole machine, which had been so carefully put together, began to move under the direction of the Chairman, Mr. [George] Mather, who stayed at the phone in his office in touch with every district.   During the day the reports were most encouraging and that night was held the first large meeting since the ban was lifted, the “Big Meeting” at the Armory.

This was the largest meeting ever held at the Armory.  Before the doors were opened people began coming in from all parts of the County with gaily decorated cars, for it was known that the armistice had been signed at eleven o’clock and joy was in full sway.  Not satisfied with the parade on the previous Thursday, another was held before the meeting, led by the Shriver truck with the German gun, and the small cannon and big bell, in which there were over one hundred decorated cars, numerous trucks filled with cheering men and women waving flags, ringing bells and burning red lights…

Each night of that week, the funds were tallied and it became obvious the County would easily reach its goal.  However, “it had been discovered that many people who did not have the ready money to contribute, wished to give something, and the solicitors were being offered poultry, fruit, dogs, livestock and other articles.”  Consequently, a sale of the donated goods was organized for Saturday afternoon and Westminster’s mayor presented “the freedom of the City to all who attended the sale.”  The Times of November 22, 1918 reported:

The committee arranged a cavalcade of gaily decorated trucks bearing the livestock and other articles to be sold followed by the liberty bell ringing and the one pound gun in charge of C. Fisher Wantz firing at intervals of a few minutes, passed through the streets just prior to the sale.

When the parade reached Belle Grove Park a crowd had gathered that occupied the entire area of the square….Mayor Koontz welcomed the people…and Guy Steele, Esq. stated conditions and terms of sale.

Mr. King was asked to describe the cow and calf he donated…and [he] closed with a strong appeal for a liberal spirit and support of the campaign.  They were then offered for sale and purchased by Mr. Jos. N. Shriver for $200 and donated to be resold and the purchaser was Mr. Thomas Hann for $185.

Other sales were made rapidly and almost every article was redonated from one to a dozen times and the gun had to be fired so often that the ammunition was exhausted.

The muskrat skins given by the orphan boy [Howard Knott/Knox] who had no money to give but wanted a part in this splendid work were sold 13 times and totaled $35.70 cash.  The last purchaser Mr. S. C. Stoner gave the skins back to the boy.

The sale raised $1,323.60.  Every election district exceeded its quota and The Times headline for November 22, 1918 read, “Carroll County Goes Over the Top With a Whoop!” 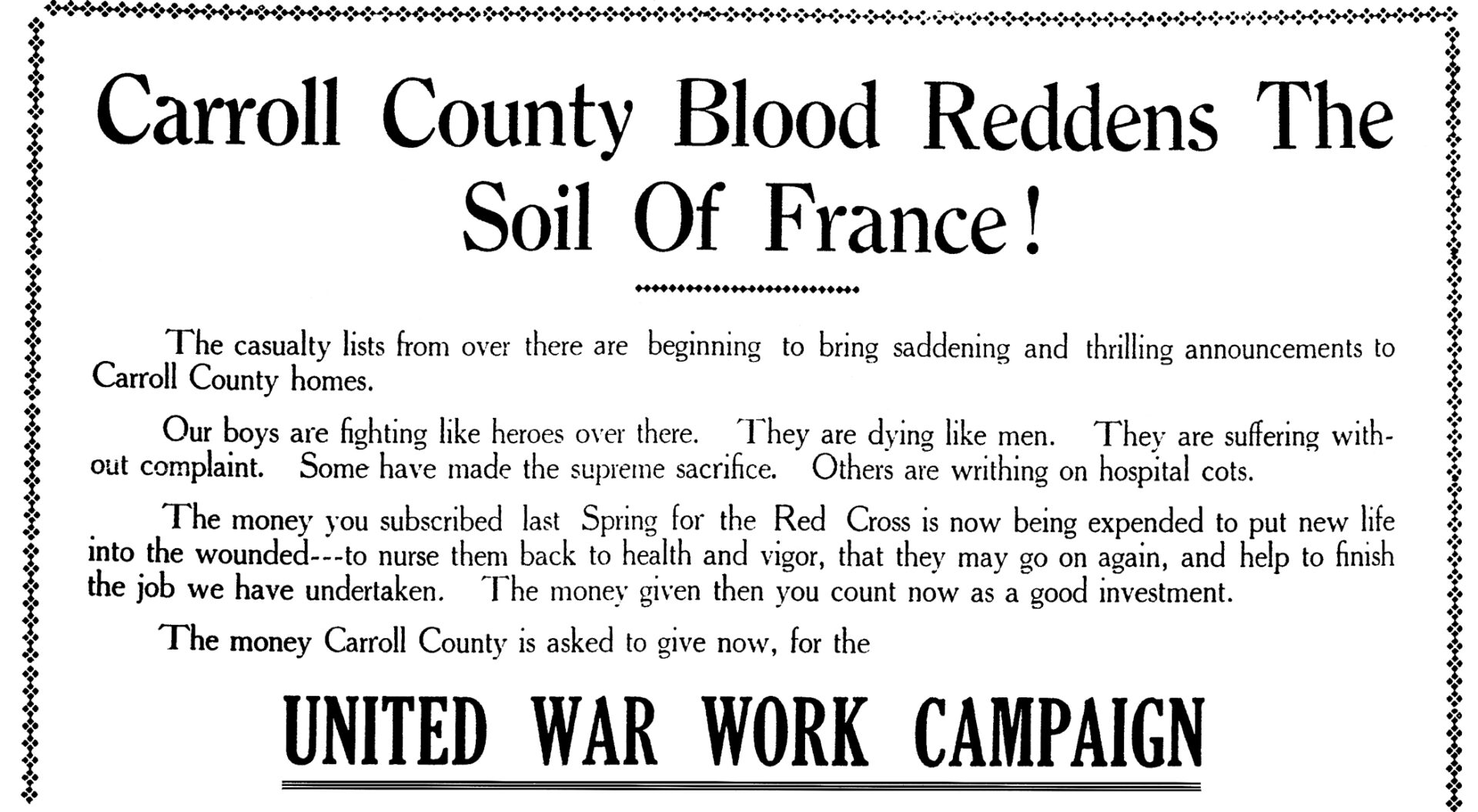 Picture caption:  Part of an advertisement for the United War Work Campaign of November 11-18 that appeared in The Times of November 8, 1918.