Carroll Countians were not discussing “global warming” during the 1880s when local newspapers covered stories about winter activities.  The following poem and article appeared under the headline of “Merry Skaters” in the Democratic Advocate of January 6, 1883:

Over the frozen lake the merry skaters glide,

While arm in arm, securely, side by side,

Quaffing to fullness bliss without alloy.

Health paints each cheek, joy beams in every eye,

The frolic moments pass unheeded by.

The hours, with winged feet, pursue their flight

From morn till noon, from noon till coming night,

Till, weary with their sport, the skaters feel

And through the evening hours their joys prolong,

By telling o’er the hap’nings of the day,

And thus the halcyon moments glide away.

More than a hundred citizens of Westminster went skating on New Year’s Day, at “Silver Lake” (Winters’ Dam) Cranberry Station, and a majority of them went by the 1:33 train in the afternoon.  Upon inquiry at the ticket office it was learned that the “round trip” was ten cents [they had to walk back.]

When the train pulled up to the station and the crowd boarded the train, the conductor looked like a May morning, thinking he had a bonanza in the way of travelers.  He called out “tickets” and went through the forward car, and every ticket bore on it “Westminster to Cranberry.”  This did not disturb him much, as the ladies’ car was full, also, and he stepped lightly in the door and with a smile “child-like and bland” again called out “tickets.”  He had not proceeded far before his physiognomy changed, as every ticket read “Westminster to Cranberry,” and by the time he had gotten to the rear of the car his smiles had given place to an expression similar to that produced by eating cranberries cooked without sugar.

Cranberry was reached by the time the merry party had gotten fairly seated, and a rush was made for the lake.  Soon the sound of steel over the ice was heard, mingled with laughter and screams, as the ice occasionally flew up and hit some one.  The sport was heartily enjoyed by the whole company, old and young, ladies and gentlemen, and no accidents, beyond an occasional “change of base” from a perpendicular to a horizontal, occurred.  In the falling line, a Westminster broker took the cake, for he was down every few minutes, though he often lay down to take a draught of the dam water, the exercise exciting thirst.

Among the sports was a game of “prisoners’ base,” by the younger skaters, and some lively skeeting was done, the racers sometimes running ashore in the mud in their efforts at escape or capture.  The ice was six or eight inches thick, the skating rather good, and in addition to the large number on the ice, the shores of the lake were lined with spectators, who surveyed the enlivening scene with scarcely less enjoyment than the skaters themselves.

On another occasion, the Democratic Advocate’s Tyrone correspondent reported:

The long wished for snow has made its appearance, and at this writing there is excellent sleighing.  Every one who is able to get a sleigh and horse and a few bells are out enjoying themselves.  Sitting at our window writing, not less than fifteen sleighs passed in less than an hour.

The Advocate’s Sam’s Creek correspondent, however, must have been somewhat sympathetic to the horses who pulled those merry sleighing parties when he or she wrote after the snow melted:

Sleighing is a thing of the past.  If it had continued one week longer a horse convention would have been held, as all the preliminaries had been arranged. Old “Duck” and the “little bay” down the valley had already laid complaints.

While sleighing may have been lots of fun for those inside the sleighs, the horses pulling them at high speeds over slippery roads probably felt quite differently than their owners! 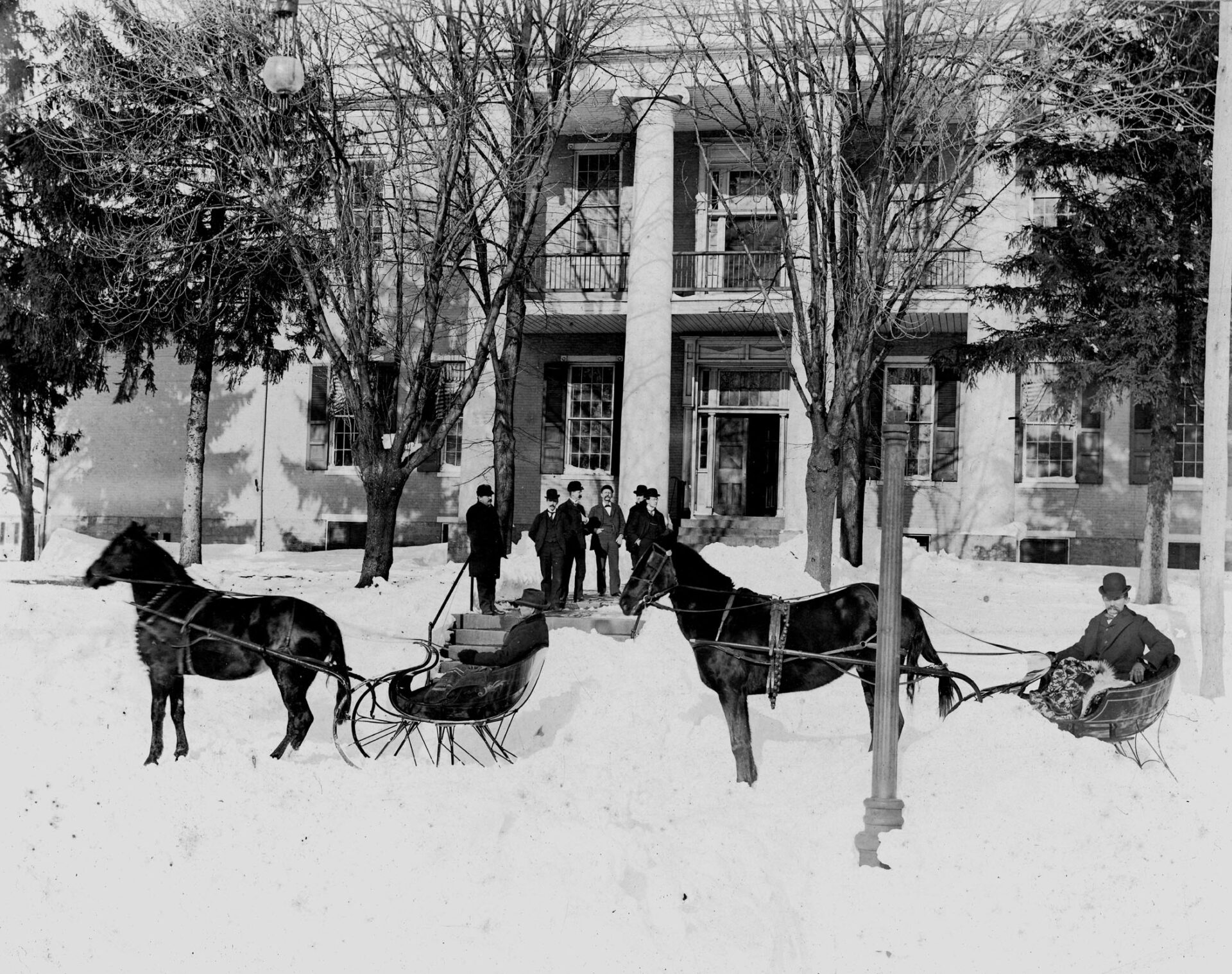 Photo caption:  Sleighs parked in front of the Carroll County Courthouse in Westminster, 1897.  From the collection of the Historical Society of Carroll County.