Margaret Anna Roop and John S. Teeter became sweethearts at the Maryland Collegiate Institute in Union Bridge (later Blue Ridge College in New Windsor) in the early 1900s. After graduating, they married and moved to Florida where John’s family resided.  But Margaret missed Carroll County where she had grown up on her Grandfather Utz’s farm and her grandparents were getting older.  In 1910 the couple returned, bought the Utz property, moved into another part of the house and began a life of farming.  They named their farm between Taneytown and Littlestown “Willow Brook” and brought up eight children – John D., Daniel, Mary, William, Virginia, Richard, James and Frederick.  Dr. James Teeter of Waynesboro, Pennsylvania is the only survivor, though numerous grandchildren and great grandchildren remain in the area.

John S. expanded the farming operation to nearly 1,000 acres.  The family raised a prize-winning herd of registered Holstein dairy cattle.  In addition to growing food for the animals and the table, the Teeters supplied grain to Westminster’s Sherwood Distillery.

They were always active in agricultural events including fairs held in Taneytown and Westminster.  They had a stable of riding and jumping horses and competed in Maryland, Pennsylvania and Virginia horse shows in the late 1930s and early 1940s.  One of their horses, “Top Rail,” was Grand Champion high jumper in Green Spring Valley, Baltimore County, two years in a row ridden by James and Richard.

In 1926 Teeter bought a quarry near Gettysburg and began producing crushed stone for the system of public roads rapidly expanding during that period.  He possessed a great entrepreneurial spirit and tackled many projects during his lifetime, apparently successful in each of them.  Soon he became involved in road construction as an outgrowth of his stone-crushing operation.

The family-owned company, which now included farming, quarrying, contracting, hauling and road construction, gained national recognition.  In 1936 it was incorporated as John S. Teeter and Sons.  Sons John D. and William worked for the corporation as well as son-in-law Robert Clingan, Mary’s husband.  Mary worked in the Gettysburg Quarry office for a time.  Youngest son Fred also joined the business after college graduation.

Although all the children were members of the corporation, not all found careers there.  Daniel graduated from law school and served as District Attorney for Adams County for 16 years.  Virginia received a nursing degree, while Richard and James received medical degrees and practiced psychiatry and surgery respectively.

Upon the death of John S. Teeter in 1946, his eldest son, John D., took over as president. Eventually the firm left road construction, but not before participating in many significant highway projects in Maryland and Pennsylvania including parts of the Pennsylvania Turnpike.

With crushed stone in great demand during the late 1940s, the company leased the John Hyde Quarry outside New Windsor as a local source of stone and introduced modern crushing methods.  The quarries in Fairfield and Gettysburg continued under Teeter Stone ownership and management.  Meanwhile, Fred and his wife, Priscilla, resided on the farm near Taneytown and ran the large dairy operation which supplied milk to markets in Washington and northern Virginia.

Margaret Roop Teeter passed away in 1957.  At that point, the fine herd of dairy cows at Willow Brook was sold along with all the farms and equipment.  The family closed the John Hyde Quarry and moved operations to Medford Quarry off Rte. 31 between Westminster and New Windsor.  The stone from that location was valuable not only for road construction, but also became popular for ornamental purposes because of its rose, white and blue-gray hues.

Within the next few years the family corporation was dissolved and Medford, Fairfield and Gettysburg Quarries were sold.   All three continue in operation today under different ownership.

Members of the Teeter family enjoy keeping their family history alive.  They laugh about relatives from New York who came to Willow Brook one spring with only their “city” clothes to wear while they helped with the “country” chore of whitewashing fences and outbuildings.  They promote reunions of their Roop and Teeter relatives.  They keep boxes of family photographs dating back over a century, histories of the businesses, trophies from horse shows and agricultural fairs, and a very special diary of John S. Teeter’s father, John D. Teeter, which records his travel west by wagon from Illinois to California in 1874 and to Florida where he settled in 1889 with his wife, Susanna Hershey.

This close-knit family is typical of the energetic, industrious German-speaking immigrants who settled southern Pennsylvania and northern Maryland centuries ago.  Although John arrived at college from Florida, his roots were Pennsylvania-German, as were Margaret’s ancestors who had lived in this area for generations.  How fortunate they ended up spending their lives in Carroll County! 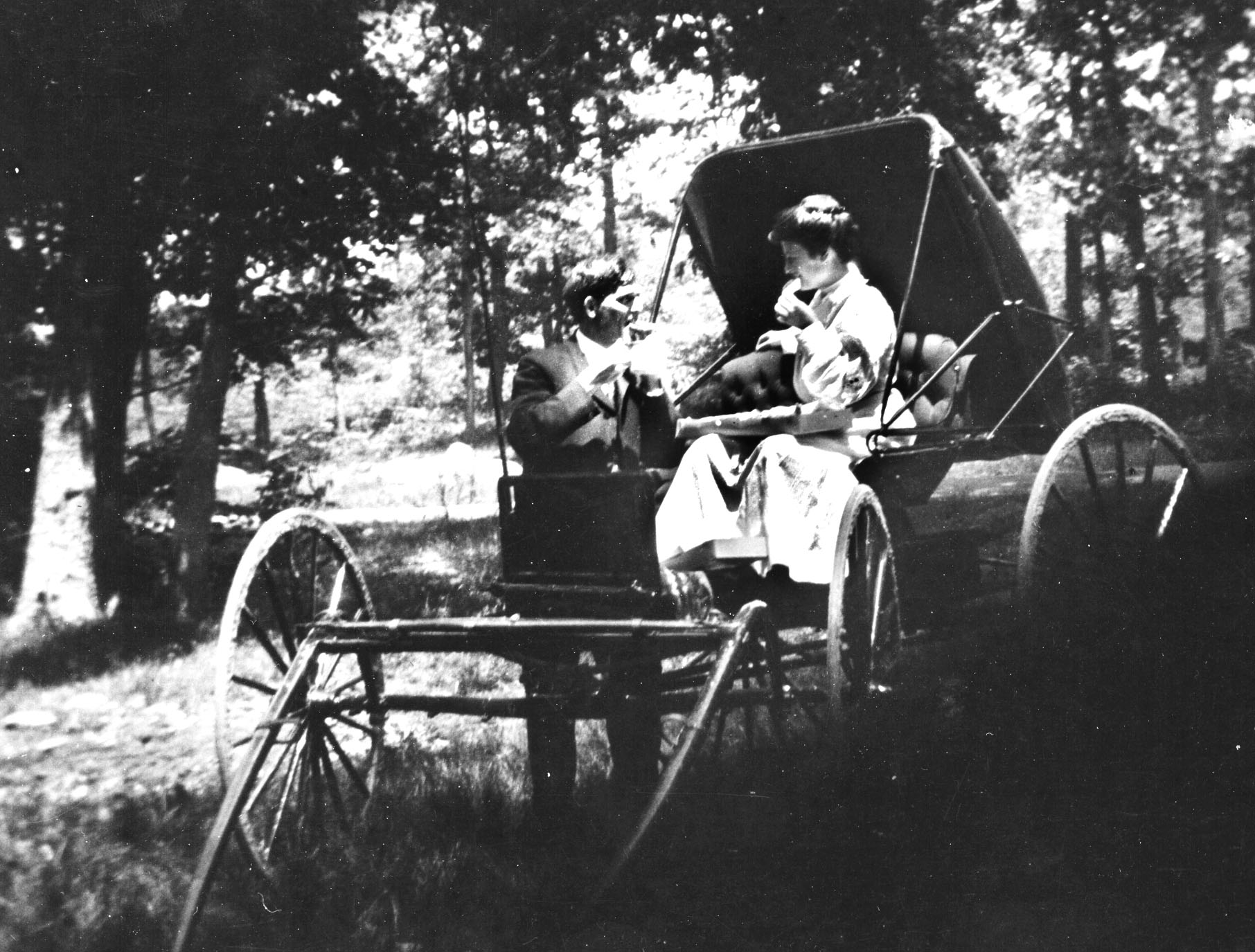 Photo caption:  In this charming old photograph, Margaret Roop and John S. Teeter share a picnic lunch during the time they were courting in the very early 1900s.  Photo courtesy of Priscilla Teeter.