Carroll Used to be Locale for Cigar-making “Factories”

Cigar-making in Carroll County?  Absolutely!  Although many of us associate it with Havana, Cuba or Tampa, Florida, it was a booming industry here following the Civil War until about 1930.

As early as 1814, an advertisement in the Uniontown newspaper announced the opening of a shop to make and sell “segars.”  About 50 years later, the Wantz Cigar Factory began production in Westminster, but the town of Manchester dominated the industry beginning in the early 1870s.

Walter Hanson, Charles Masenheimer and Wm. M. Gettier were the founding fathers of cigar-making there.  They began by bringing cigar makers from other areas and “established a business that made the name of Manchester famous for the ‘smokes’ that came from it.”

Factories with exotic-sounding names like El Dalo and Excelsior competed with ones whose names were more prosaic – Miller Brothers, Carroll, Gettier and Southern.   Their products bore brand names such as “Duke of Manchester,” “Gilt Edge,” “Cronies,” or “Old Smoker’s Delight.”

Although the companies called themselves “factories,” the buildings were quite small, often the second floor of a home.  In pictures on the walls of the Manchester Historical Center, men and women pose in front of their work sites, many wearing large aprons, looking neat, clean and quite relaxed.  Some factories employed only men while others welcomed women; most had between 10 and 30 workers based on the old photographs.  By the 1920s, women dominated the workforce, so when the cigar industry gave way to garment-making, they filled the new jobs.

A reporter covering Manchester for the American Sentinel in 1911 wrote, “Our cigar factories are putting in full time, 12 hours a day, from 6 to 6, to meet their orders.  In conversation with the manager of the Gettier factory, he said they are handicapped for want of hands and that their shipments are from 190 to 400 thousand a month, most of which go to the Pacific Coast.  The Masenheimer and Hanson factories are also in full blast with heavy shipments each month.  Each week they pay more than a thousand dollars to their employees.”

Workers came from Westminster and Hanover, Pennsylvania as well as Manchester.  In the evenings, a large number of local children and older adults worked at home stripping the main ribs out of the tobacco leaves by hand.  Each morning someone stopped to pick up the stacks of stripped leaves and deliver them to the factories.  Julia Berwager, docent at the Manchester Historical Center, recalls family members involved in this process.  Her grandfather, Arch Buchman, owned one of the factories.

The source of tobacco appears to have been local growers, at least during the early years.  In 1879, eighty-eight Carroll County farms raised over 134,000 pounds of tobacco, mostly in the Freedom and Franklin districts (Eldersburg and Taylorsville areas).  Tobacco was a very labor-intensive crop, so each farmer only raised a couple of acres.

Making cigars took a short time compared to the months of growing and curing the tobacco.  A “bunchbreaker” at the factory folded the leaves in his hands to reach the desired thickness of the cigar, then wound a strip of binder-leaf in a spiral down the length of the bunch to hold it together.  The bunches were placed in wooden molds, pressure was applied, and when the bunches were sufficiently compressed, a “roller” rolled the cigar diagonally in a strip of the best leaf tobacco.  A small piece of wrapping leaf was used to form the head of the cigar (the end placed in your mouth).  This might be dipped in a sweet paste.  The other end was cut off, forming the foot (the end you lit).

Around each cigar went a paper band to protect it from the sweat and dirt of the smoker’s fingers and perhaps a cellophane wrapper.  Finally, the cigars were packed in boxes or wrapped in bundles ready for shipment, although small numbers might be sold in a retail shop associated with the factory.

Gone are the days when York, Westminster and Main streets in Manchester were alive with cigar factories, but several photographs of them appear in the recently published Images of America: Carroll County which is available in local bookstores.  The Manchester Historical Center contains many artifacts and images associated with the industry.  The county is full of interesting surprises!

Mary Ann Ashcraft is a library volunteer with the Historical Society of Carroll County. 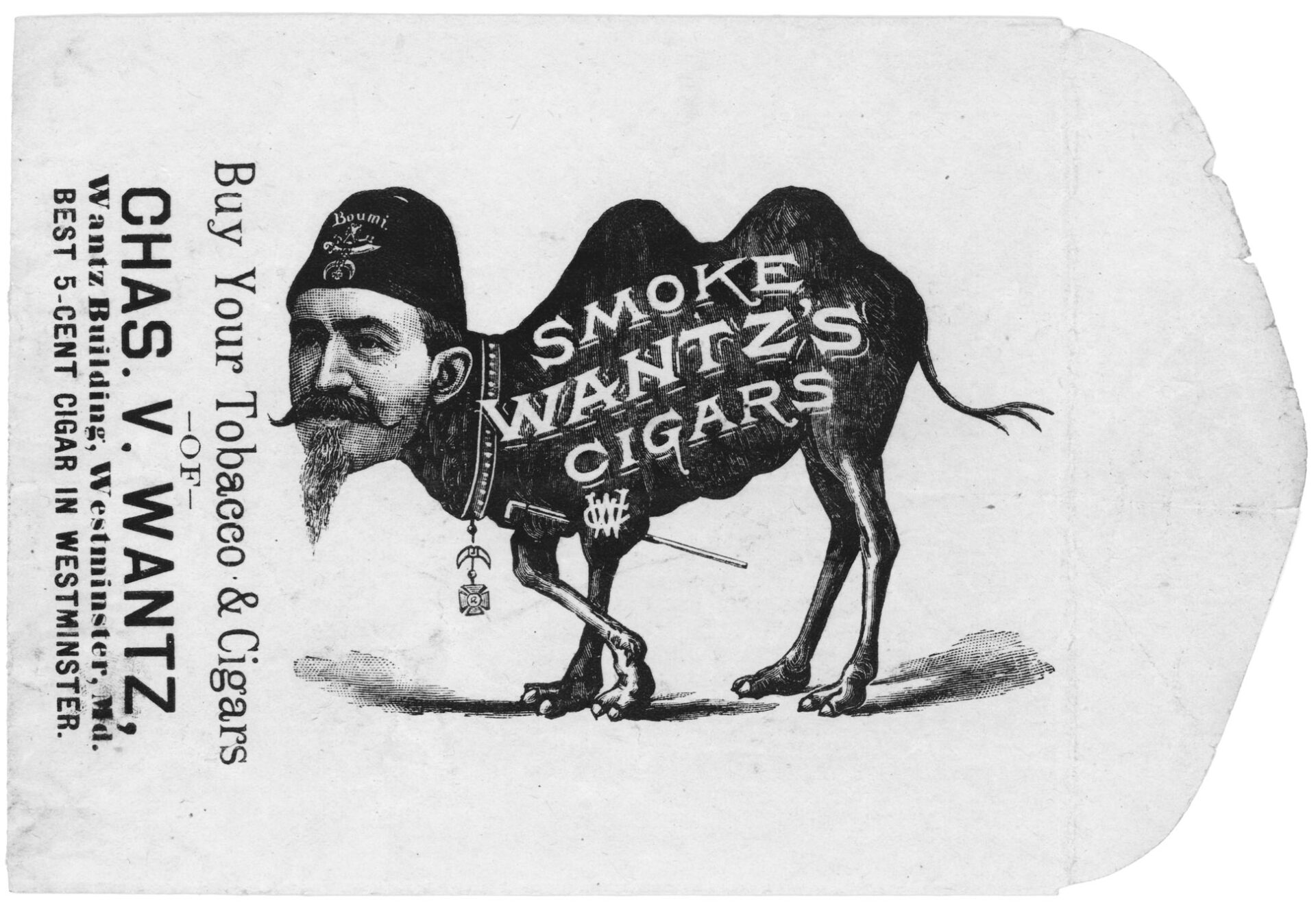 Photo caption:  Although Manchester dominated the cigar-making industry in Carroll County, this humorous ad comes from a Westminster maker who also had a retail store on East Main Street.  Image courtesy of Historical Society of Carroll County.