This is the story of John Paris/Parris Sheahan, a Civil War soldier from Maine, who married Lizzie Shriver, a Westminster native. Born in 1842 in Dennysville, Washington County, near the Canadian border, John enlisted in
August 1862 as a private in Company K, 1st Maine Cavalry. His regiment was assigned to the Army of the Potomac, the largest Union force operating in the Eastern Theatre of the war. Sometime before the 1st Maine Cavalry fought at Gettysburg, he became acquainted with Mary Elizabeth “Lizzie” Shriver and his life changed course. It isn’t clear exactly how or when they met, but her father, Francis Shriver, was a staunch Union supporter and may have invited some cavalrymen to dinner at the family home while they were near Westminster in late June 1863. As John and Lizzie corresponded over the next months, their relationship grew.

John survived Gettysburg and subsequent cavalry action. He spent time in late 1863 studying to receive an infantry officer’s commission and left the cavalry to become a 1st lieutenant in the 31st Maine Volunteer Infantry. Two of his younger brothers also joined the 31st . Early in 1864, John wrote his father with the wonderful news that he was engaged to Lizzie. He had warned her that he was unable to get married until four years after leaving the army, “for I intend to study medicine but despite this she says I shall wait…. if at the end of four years…. if she is then single
I shall marry her.” On July 30, 1864, John was among those captured during the Battle of the Crater outside
Petersburg, Virginia, and spent the next seven months at a Confederate POW camp in Columbia, SC. He must have escaped or been released when Sherman’s Union Army captured that city in February 1865. After the war ended in April, and he could think positively about his future, he returned to Westminster to marry Lizzie at Westminster’s Church of the Ascension on August 16.

Two years later, he realized another dream when he graduated from Maine Medical College, part of Bowdoin College, with degrees as a physician and dentist. By 1869 the couple were back in Carroll County where John practiced medicine. Tragically, a 10-month-old daughter died in 1870, but two sons, John E. and William H., were born shortly after. In 1874, the four Sheahans left for rural Maine to settle near John’s aging parents. The 1880 census showed them there with John continuing to practice medicine. The bodies of Lizzie, who died in 1892, and John, who died in 1894, were apparently returned to Westminster to be buried in Westminster Cemetery near her parents and their infant daughter. Someone in the family left John’s journals, insightful letters to his parents, photographs, and
other items to the Maine Historical Society for posterity to read and enjoy. Join members of the Pipe Creek Civil War Round Table on June 24 and 25 for their annual Corbit’s Charge commemoration. Among the programs offered will be guided tours of Westminster Cemetery by the author highlighting various Civil War veterans buried there.
Guest columnist Lee McGinnis is a re-enactor and avid student of the Civil War. 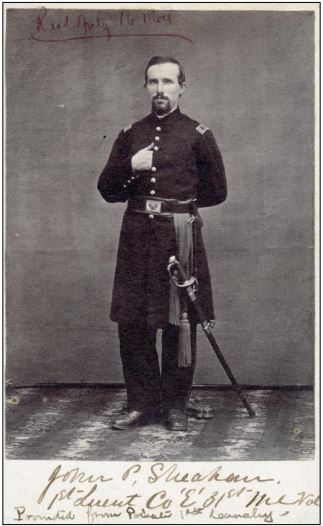