Many readers of this column probably delve into family history. If so, you know the challenges of tracing an ancestor, especially if you are descended from a Smith, Jones, Johnson, or other common name. Just for the heck of it, I went to the office of the Carroll County Register of Wills and randomly picked out the name Joshua Smith to research. Little did I realize that Joshua turned out to be the father of John Smith (of Wakefield) who was instrumental in the founding of Western Maryland (McDaniel) College. But that is another story! Joshua wrote a very detailed will in 1841 just before he died, which was a good place to start my little investigation using a common surname. The will named his children and the numerous properties he was leaving them. There was no mention of a wife, so I assumed she was dead. He freed two of his young slave girls and left several other slaves to his son John and daughter Mary. Once they reached 25, the four men and one woman were to be set free. Lastly, he appointed his son, John, as his executor.
Next I looked at the administration account John submitted to settle his father’s financial affairs.

Finally, I looked at the inventory of Joshua’s personal property and the value of everything he owned from his slaves to a “tub of sour crout.” Many people forget to look at the inventory of an ancestor and don’t realize what insights it
offers into that person’s lifestyle. Joshua’s inventory, as filed by John, indicated a farm with livestock including horses, cattle, sheep, and pigs. The long list of agricultural equipment covered plows, rakes, harrows, wagons, grain cradles, horse collars, etc., some described as “old.” It isn’t hard to envision a working 19th century farm – large barn full of hay and grain with equipment lying around or hanging from the walls. Sows and piglets would add to the barnyard’s noise (and smell). The inventory mentioned timothy hay worth $100, over 300 bushels of harvested wheat, plus 42 acres of wheat worth $420 growing in Joshua’s fields. It is hard to judge how many people the Smith farm usually fed, but they likely included Joshua, some adult children still around, his seven slaves, and possibly hired hands. The inventory of his foodstuff included the aforementioned tub of “crout” as well as half a ton of salt pork, a quarter ton of salt beef, potatoes, and 130 pounds of lard. We know where some of those pigs ended up!

The Smith home was furnished with a generous number of tables and chairs, looking glasses, a ten-plate stove, bed steads, lots of carpeting, cotton and linen sheets, candle stand, wash bowl and pitcher, a dozen knives and forks, plus other items indicating comfortable surroundings although not particularly elegant ones. A slave must have lived in the household because the furnishings included a “Negro bed, cloths & stead.” Although Joshua Smith isn’t my ancestor, this information would offer an actual descendant a good understanding of his lifestyle at the time of his death. 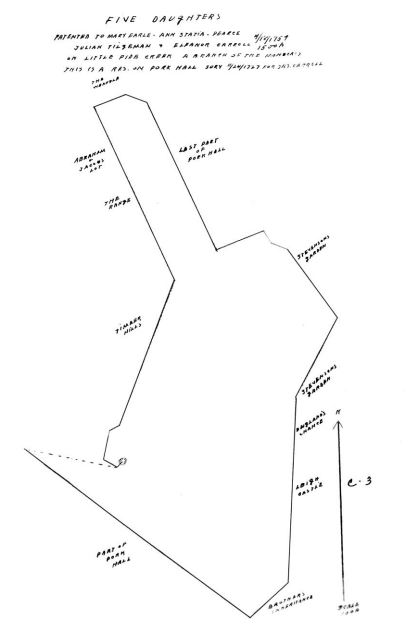 Photo credit: Historical Society of Carroll County
Photo caption: Dr. Arthur Tracey drew this map of an early land tract called “Five Daughters” once owned by members of the famous Carroll family. Joshua Smith owed a portion of it near New Windsor in 1841 and left it to one of his children.