14 May 2017 – Two Buildings in Union Bridge Have Historical Significance

14 May 2017 – Two Buildings in Union Bridge Have Historical Significance

There’s a lot of African American history to be found around Union Bridge in western Carroll County, but one important part of that history is now an “endangered species.” It is Bowen’s Chapel, a tiny church sitting on a quarter acre at the intersection of Raywell Ave. and Bark Hill Road. What makes this property and its two humble buildings endangered, but worth keeping, as part of Carroll’s heritage? As the Civil War drew to a close, the U.S. government established a well-intentioned, but unfortunately short-lived agency called the Freedmen’s Bureau. One of its missions was to build schools with federal funds for the thousands of black children who had been denied an education in the South. Maryland, a former slave state, was eligible to receive funds and two schools were ultimately built in Carroll County with Bureau money—a school on Union Street to serve Westminster children, and another halfway between Uniontown and Union Bridge which became known as the “Muttontown” school. There were two competing groups of people who wanted to establish a school in the Uniontown-Union Bridge area, but nine free black men bought a quarter acre of land for $50 in 1867 and that land became the site of the second school.

Somewhat to the consternation of Bureau officials, the building served as more than a school. It was also a gathering place for the local black population and probably a house of worship. During the 1870s, the list of schools in Carroll County included an “African” school (Muttontown) along present-day Bark Hill Road. A dot on the 1877 county atlas identifies the school. Down through 150 years, that multi-purpose structure has been maintained by the families living around it. In the 1890s, a separate school was constructed behind the original building and from that time forward the original building served only as a church—Bowen’s Chapel. Even as the number of worshippers dwindled to the single digits, Evelyn Howard, a descendant of John Henry Thompson, one of the men who purchased the land, threw her heart and soul into keeping Bowen’s Chapel going. Mrs. Howard also kept the black history of that area of Carroll County alive and shared it with anyone who showed an interest.

In 1995, Tom Keyser, a writer for the Baltimore Sun, put together a feature article on Mrs. Howard and her beloved church. At that point, Bowen’s had an affiliation with the African Union Methodist Protestant Church Conference, now based in Wilmington, Delaware, to supply a pastor. However, the pastor’s salary came from the weekly offering and the conference gave Bowen’s no financial support. Now Evelyn Howard is dead, and no services are held in the church, but Mike and Tambra Powell and Anita Brooks are stepping in where Mrs. Howard left off, and hoping to keep Bowen’s Chapel from being taken over by the church conference. Tambra envisions the buildings on the property could serve as an historical/educational resource, continuing for many more years as a gathering place for residents of the Union Bridge area, and maybe once again as a church. 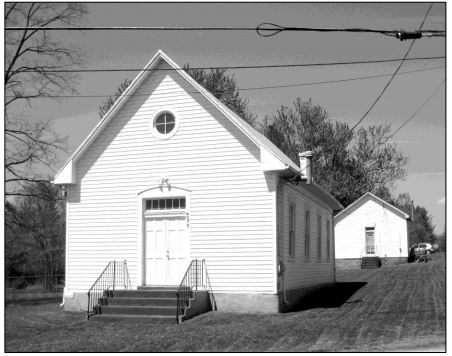 Mary Ann Ashcraft is a library volunteer at the Historical Society of Carroll County.
Photo credit: submitted photo
Photo caption: Bowen’s Chapel, building in the foreground, stands between Uniontown and
Union Bridge along Bark Hill Road and served for many years as a church and school for local
black families beginning in 1867. The building in the rear, constructed later as a school, allowed
Bowen’s Chapel to function solely as a church from the 1890s.