Every so often I come across a family story that seems to be reliable and worth passing along. Today, it is a pleasure to share the following story from Jay Hull who heard it from his mother. It couldn’t be more appropriate on the weekend commemorating Corbit’s Charge, an event that occurred June 29, 1863. David Reese (1825-1895) was a well-read local farmer who, in the 1860 presidential election, was one of a mere handful of Carroll Countians who voted for Republican Abraham Lincoln. Southern sympathizers in the Westminster area knew his political leaning and opposition to slavery, and those sentiments apparently made him a “marked man.” As General J.E.B. Stuart
and his 4,000-5,000 Confederate cavalrymen left town following their bloody skirmish in Westminster on June 29, four men were dispatched to capture Reese. An unsuspecting Reese answered a knock on the door of his home north of town where he lived with his invalid mother and her caregiver. He agreed to go peacefully with his captors but asked that he be allowed to put on his boots and coat, then he closed the door. Needless to say, the story doesn’t end there. He grabbed his things, then ran out a basement door to the back yard and dove into a trench behind a row of currant bushes, covering himself with a pile of old leaves.

When no one reopened the door, the duped soldiers burst into the house, searching it from top to bottom. Three of them wanted to burn it down. Fortunately, the fourth argued against the idea. Lying in the trench, Reese probably couldn’t hear what transpired, but eventually he heard the hoofbeats of horses as they crossed a wooden bridge over the Meadow Branch of Big Pipe Creek and rode off in the direction of Union Mills. He only caught the sound of three sets of hoofbeats, however, and four men had appeared at his door. The following morning, he heard the fourth Confederate ride away and came out of hiding – his home and family safe and sound. So, perhaps, were the horses he earlier hid in woods west of his farm when he learned enemy forces were approaching. The family story mentions hiding the horses, but omits whether they were discovered.

David had a narrow escape. By the time the presidential election of November 1864 rolled around, many more Carroll citizens supported Lincoln, the Confederacy was on its last legs, and David was married to his neighbor, Sarah Catharine Byrnes, a girl about nineteen years his junior. They began a family that eventually included nine children.
David and Sarah’s home still stands on Meadow Branch Road with the same front door David opened to that knock in 1863. The couple, who died in 1895 and 1899 respectively, are buried nearby in Krider’s Cemetery. Jay Hull’s mother, Elinor R. Morelock Hull, is a granddaughter of David and Sarah Byrnes Reese. Enjoy learning more about Carroll County’s role during the Civil War at the Corbit’s Charge commemoration held at Emerald Hill (formerly Westminster’s City Hall) this weekend. 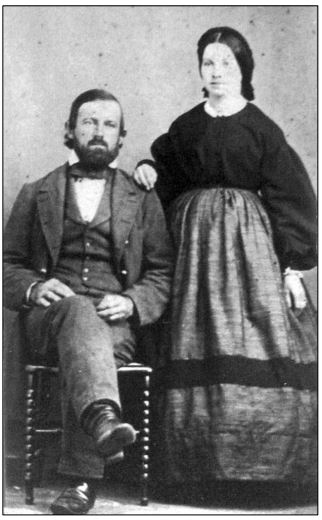 Photo credit: Hull Family Collection
Photo caption: David Reese and his wife, Sarah, appear in this photo probably taken between 1865 and 1870. David’s story is one of many fascinating ones to come down from the Civil War era.