Resources for an In-Depth Look at Carroll’s History

Resources for an In-Depth Look at Carroll’s History

In this twice-monthly column there isn’t room to cover major topics related to the history of Carroll County, but readers may want to know where to find background information. Below is a list of some sources to use if you want in-depth coverage of historic people, places, and events. Joe Getty’s Carroll’s Heritage is a treasure trove of material on local architecture and history written when Joe’s interests ran heavily in that direction. It is available for sale at the Historical Society of Carroll County, but copies can be borrowed from our public library system. Just South
of Gettysburg by Frederick Shriver Klein is out-of-print, unfortunately, but a wonderful resource for anyone who enjoys Civil War history. Carroll County and a number of her towns are featured in publications that are part of the Images of America series—paperback books of photographs with generous captions that cover an area’s interesting citizens, important events, and other topics in a format that is easy to digest. The series relies on the old idiom that “a picture is worth a thousand words.” Its photographs often come from museums or private collections and can’t be found elsewhere. Taneytown, Sykesville, and Westminster are covered by the Images series as well as the entire County and a look at Carroll County farming and farmers. Look for the books at various local outlets or borrow them
from the public library.

You’ll also find books in this series covering aspects of Frederick County and other neighboring areas that have long been intimately associated with our history. Many years ago, Harvey Schlicter wrote Two Centuries of Grace and Growth in Manchester, a well-researched look at the town where he served as a minister. It contains lots of information about the Lutheran and Reformed churches in the area, but also about the town. Bob Porterfield
and Joan Prall, both deceased, shared their knowledge of Hampstead. Bob’s book included many photographs. John Foertschbeck covered Woodbine, a small but interesting community along the tracks of the B&O (now CSX), in another book with plenty of photos. Diana Mills Scott captured the history of the southeastern part of the County in a richly illustrated book called The Forgotten Corner: a history of Oakland Mill, which has recently been
reprinted. Mrs. Scott interviewed many residents associated with the mill town that was the home of the Melville Woolen Mill until the construction of Liberty Dam and flooding of a branch of the Patapsco River left it under Liberty Reservoir.

By no means are the books mentioned above the only ones covering the history of Carroll County. Many others have appeared over the years such as The Carroll Record Histories of Northwestern Carroll County Communities based on newspaper articles appearing in the late 19th century in a Taneytown newspaper called The Carroll Record.
Currently, Carroll County Times columnist Frank Batavick is working on a history of New Windsor where he and his wife lived for a number of years. Enjoy boning up on local history, but remember that new research may reveal mistakes in old publications, so double check information that seems questionable. 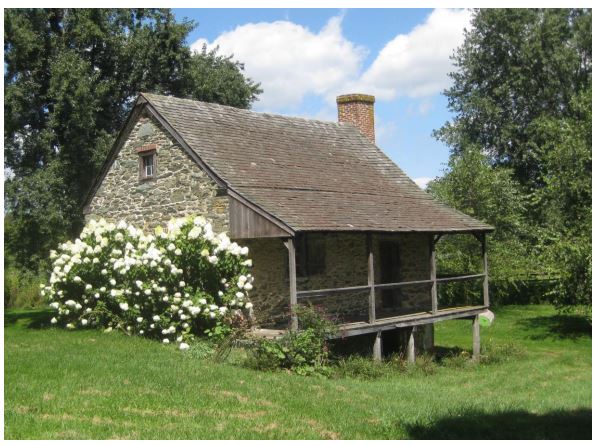 Photo caption: Christian Bauer’s house, built in 1785 in Bachman’s Valley, is one of many Carroll County houses featured in Joe Getty’s book, Carroll’s Heritage, a valuable addition to our local history.