Under the headlines “Public School Visiting” in issues of the American Sentinel, there is much fascinating information about Carroll’s schools, teachers and students in the early 1880s.  Christmas and Washington’s Birthday were observed as holidays, but other closings weren’t mentioned.  Schools finished in April unless there was sufficient interest and money to keep them open during the summer.  When spring plowing and planting began, large numbers of older children dropped out to help on family farms.

An “Examiner” representing the school board traveled the countryside by carriage or sleigh (depending upon the weather) and was “careful to collect and enter in full in his traveling journal” statistics about each school.  He also suggested “the importance and necessity of establishing circulating libraries at every school.”  The following observations are taken directly from his 1880-81 articles:

Mechanicsville School – Here the ever cheerful and enthusiastic Mr. Charles L. Hughes was as hopefully as ever at work, although all of his pupils except about a dozen had withdrawn to the Botanical and Agricultural departments in the gardens and farms.  The zeal of the teacher and the ardor of the remaining pupils, however, had in no degree subsided.  All seemed anxious that the Examiner should pass the remainder of the day in the school; but as soon as the object of the visit was accomplished, the school was left to its work, and the Examiner withdrew, leaving the best wishes with Mr. Hughes and his industrious pupils.

Oakland School – Having now turned homeward, the visitor next reached Oakland, where Miss Celia E. Gorsuch, a brave little girl with natural talents of a high order, has been rapidly building up a reputation for herself with faithful service as a successful teacher.  This school has never been a large one, but under Miss Gorsuch’s able administration it has been gradually growing.  It is gratifying to know that the high satisfaction given by Miss Celia has resulted in awakening such an interest that she has been prevailed upon to continue her school during the summer term at the expense of the parents and pupils.

Krideler’s School (Manchester area) – At this place, it being the first visit for this school year, the Examiner had the satisfaction to find the school in charge of Miss Anna M. Buckingham, an efficient young lady who has had the benefit of careful Normal School training, which is apparent in her admirable discipline and in her superior methods of instruction.  Her school in the winter is a large one, in a house so small that the pupils can scarcely be crowded into it; at the time of this late visit, Miss Buckingham had still twenty-six pupils in attendance…

Pleasant Gap School (near Eldersburg) – Miss Libbie Shipley, a young teacher of high promise, has for the last school year rendered satisfactory service, but, as all of her pupils except four had withdrawn to their gardens, farms, etc., the Examiner had little to do but to accompany the amiable teacher to her residence where he and “Don” [his horse] were hospitably entertained.

Erb’s School (west of Union Mills) – For this schoolhouse the Board has to pay an exorbitant rent, it having been built by the late Jacob Erb.  Although the school should, perhaps, be removed to a judicious site to relieve some of the adjoining schools, it now accommodates a large number of pupils, taught for the last few years by Mr. Wm. U. Marker.  The grades were briefly examined, the Examiner gave words of encouragement to the pupils and then withdrew to partake of the kind hospitality of Mr. Wm. Kester, one of the school trustees, by whom he had been accompanied in the visit.

Mauss’s School – This school is on the Gettysburg pike, nearly a mile north-west of Silver Run.  The house is an ancient stone building crumbling away, and much too small for present requirements.  Since it was first elevated into a respectable school of modern progress by the valuable work of Mr. John Burgoon several years since, it has been a blessing to that neighborhood and has consequently become the pride of ambitious pupils, many of whom are becoming highly intelligent…Having called up the grades separately and being about to depart, the Examiner was pleasantly entertained by several well executed pieces of vocal music, one of which required concerted actions of the pupils’ hands, feet, &c., an exercise in school which has more merit than is usually ascribed to it.

Hopefully, these few snippets will give Times readers a taste of Carroll schools as they existed over 120 years ago.  The full articles contain humorous incidents, pranks students played on their teachers and accounts of traveling conditions over unpaved roads.  They are available on microfilm in the library of the Historical Society. 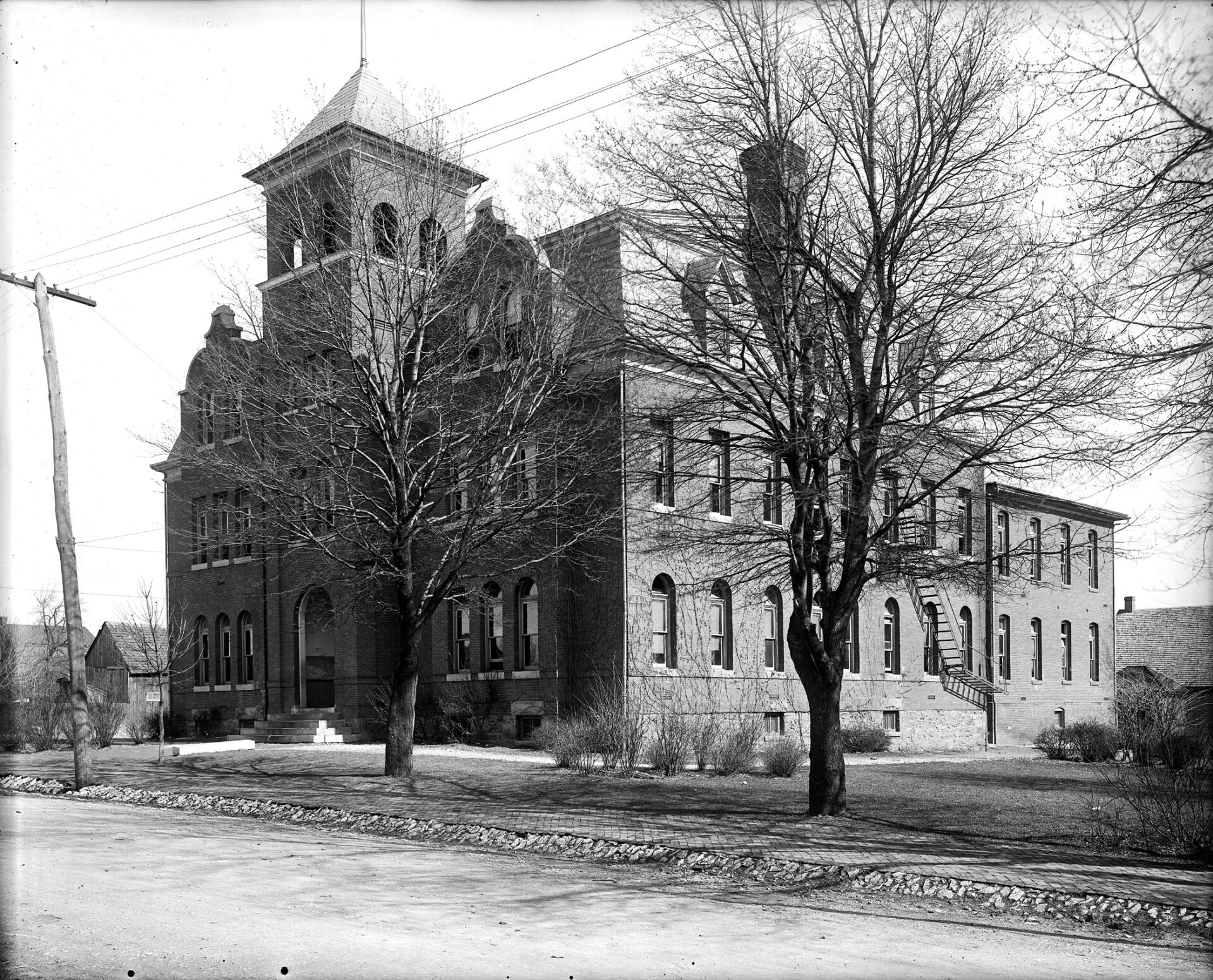 Photo:  Courtesy of the Historical Society of Carroll County.

Photo caption:  Westminster High School, located on Center Street between Green and Main, was built in 1899.  It became East End Elementary School (minus its top story) in the late 1930s when the new high school opened on Longwell Avenue. It was later sold by to a private owner and subsequently was turned into Westminster Inn.   From a glass plate negative in the collection of the Historical Society of Carroll County.