In 1881 Carroll County could boast more than 100 public schools for black and white children located in homes, churches and honest-to-goodness schoolhouses dispersed throughout the County.  In an era when everyone walked to school, no parent wanted his child walking too far.  Most schools were one-room affairs, but there were “graded” schools in some of the larger communities or where there was a demand for education beyond the basics.

Westminster’s American Sentinel published a list of the schools and their trustees, usually three local men who helped in a variety of ways but had little clout.  When schools were in session, a representative from the School Board visited them, observing and evaluating not only teachers and student progress but also the buildings and grounds.  The “Examiner,” as he was called, published his observations during the winter and spring of 1880 and 1881 in the newspaper.  What he wrote reveals much about the schools, the language of the period, and not a little about the “Examiner” himself, someone who comes across as…well, judge for yourself!

Fairview School– At this place, on an eminence between Taneytown and Uniontown, Mr. Adam H. Diffenbaugh with his usual spirit greatly improved by his long experience, was found as busily engaged as ever, successfully imparting instruction to a well governed and very pleasant school of nearly 50 attentive pupils.  As a teacher, Mr. Diffenbaugh is a progressive success, his pupils are orderly and agreeable, and it was pleasant to learn that the school as organized and conducted gives high satisfaction to all interested.  A pair of graceful little girls, having been called to the board in an off-hand drawing exercise, in motions almost as rapid as the flight of merry birds, in a few minutes presented each a correct map of an important division of the United States which would have been highly creditable had it been the work of many a teacher…

Uniontown Graded Schools – Setting off at a brisk trot, the capacious new schoolhouse at Uniontown, was soon reached.  Of all the fine schoolhouses built in Carroll County, that at Uniontown is the most attractive, for which the good taste and superior judgment of Mr. Alfred Zollickoffer and the intelligent school trustees at Uniontown must be credited.  The house is 70 x 26 feet in size, affording 1820 square feet of floor space, each room being 35 x 26 feet and the height of the ceiling is reported to be 14 feet, but it looks higher.  The bounds of the school grounds, fenced nearly all around, enclose 140 square rods, giving pupils ample space for exercise…

Pine Orchard School (near Taylorsville) – Here, in a comfortable frame house, on the land of that whole-souled Marylander, Dr. F. J. Crawford, so favorably known to everybody, Mr. A. W. Buckingham, a teacher of high merit, was found efficiently and very successfully training his industrious and happy-hearted pupils, among them a few very little girls whose evident rapid progress gave high promise of the brilliant future that awaits them if they shall continue to progress as they have so well begun.  The Examiner’s colloquy with these little girls was delightful; and the teacher’s hearty commendations of his spirited but amiable pupils, were in the highest decree creditable to them and reflected as high honor upon himself…

Wisner’s School (near Silver Run) – …At Wisner’s, in an old house scarcely fit for use and much too small to accommodate the pupils comfortably, the Examiner found his young friend, Mr. Geo. W. Yeiser, who gives as high promise for future usefulness in the profession as any tyro in the State.  Mr. Yeiser has 43 pupils on his roll, 42 of whom were present, graded 13, 5, 17, 5 and 2.  The school order was admirable, and by a few test questions, it speedily became apparent that the pupils, in general, had been brought to a lively appreciation of the subjects so industriously and so skillfully represented to them.

Parr’s Ridge School – Stopping at Mt. Airy to temporarily exchange his sleigh for a jumping sled, leaving the former in the hands of an accommodating mechanic for repairs, “Don” [his horse] soon whirled the Examiner up to Parr’s Ridge school, where he had the pleasure to find in a comparatively new brick house, the accomplished Miss Ettie Shipley gracefully and very efficiently governing and thoroughly instructing a large and well attended school of cheerful pupils of almost all sizes, from nearly full grown young men with embryo beards, and blushing beauties stepping upon the threshold of womanhood, to little frolicsome children, whose young hearts dull care has not yet reached…

Watch for more school reports from 1880-81 in the March 11th issue of the Times. 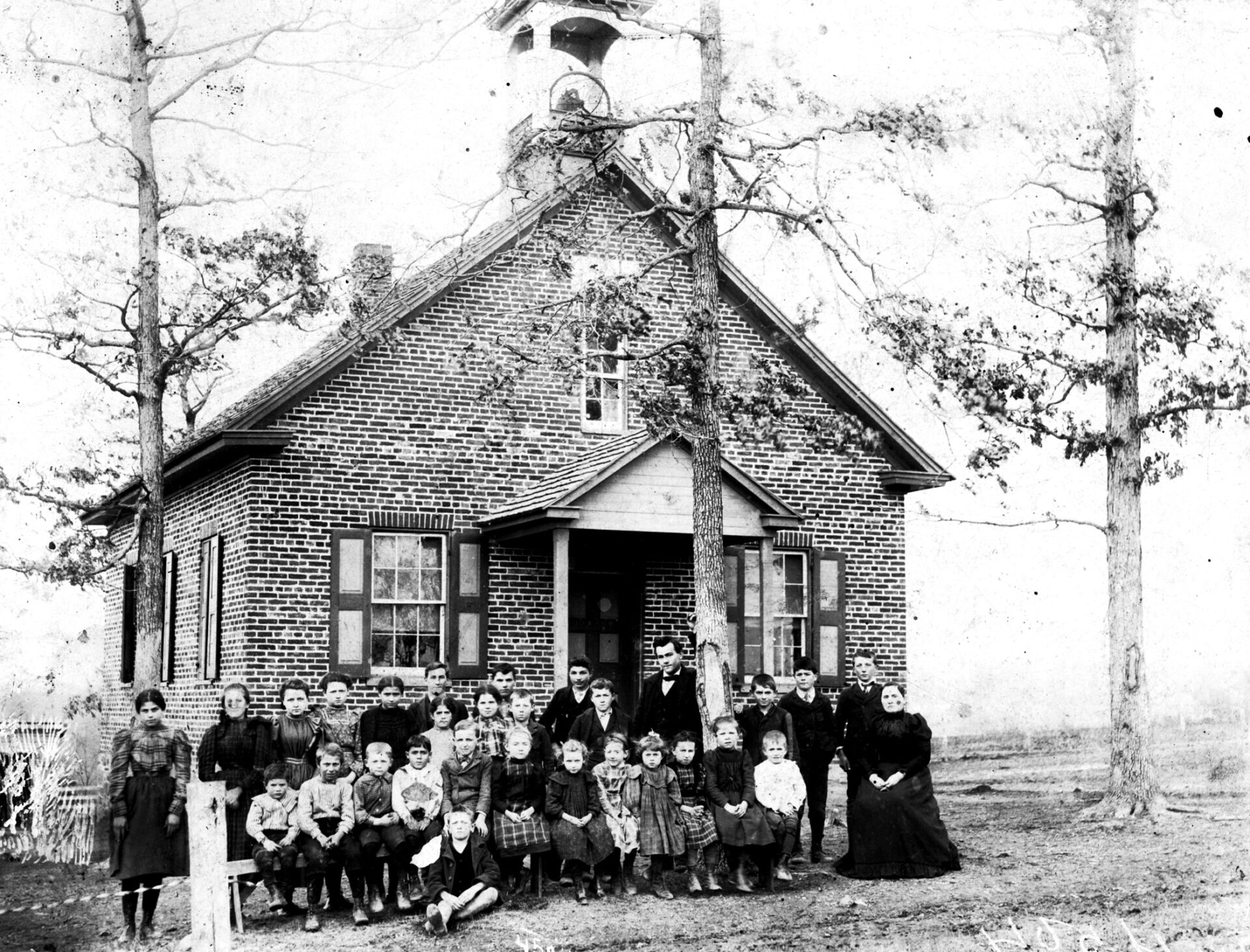 Photo caption:  The teachers and students of Otterdale School near Taneytown posed for this photograph c.1895.  It was typical of Carroll County’s rural. Courtesy of the Historical Society of Carroll County.