Although many Carroll Countians of the late 19th century spent their leisure time enjoying local dances, picnics, or races, some ventured further afield.  Newspapers were full of advertisements luring people to board trains or steamboats for a day’s outing.  Even a carriage ride to Gettysburg with fun-loving companions offered a welcome change of pace.

Summer encampments on the Gettysburg battlefield by veterans of the Civil War attracted spectators from neighboring districts who could listen to preachers “urging the Grand Army men not to be leaders in strife, but rather conservators of that peace and harmony which will give the country permanent prosperity.”  The war was still fresh in the minds of many and some visitors took the opportunity while on the battlefield to do a bit of relic hunting as well.

Other popular destinations were parks at various scenic points in the mountains, on the Bay or even in Baltimore City.

The Excursion and Basket Pic Nic to High Rock and Pen-Mar on the Western Maryland Railroad, under the auspices of the Westminster Fire Department on Wednesday morning, 11 of August next, to which the public are cordially invited, will be a grand affair from present indications.  The committee have perfected all arrangements for the comfort and enjoyment of all.  Bands of music will be in attendance to enliven the occasion, besides a cotillion band for the accommodation of those who wish to trip the light fantastic toe. Members of the Hagerstown and Waynesboro Fire Departments will be present.  The great point of attraction is High Rock, which is about one and a half miles from the Park [Pen-Mar].  A three story observatory surmounts the highest point of the Blue Ridge, from which a magnificent view of the beautiful Cumberland Valley is obtained.  The train starts at Reisterstown and will stop at all stations West to Mechanicstown, and round trip tickets will not exceed $1.00 – Children under 12 years half fare.

Three trains, aggregating 19 cars, arrived at Hillen Station, over the Western Maryland railroad Saturday, bringing over 1,300 persons from Uniontown, Mechanicstown, Union Bridge and other points in the counties.  A band of music was on each train.  The excursionists in a body marched to Long Dock and embarked on the steamers Chester and Keyport for St. Bernard’s Grove, at the mouth of the Susquehanna river, where the day was spent.  They returned home at night.  Some 800 excursionists over the Hanover branch and Gettysburg railroad came to Fulton Station and passed the day at Druid Hill Park.

Tolchester Beach on the eastern side of the Bay could also be reached by a combination of rail and steamer.  An 1881 advertisement indicated an outing sponsored by the Knights of Pythias was already in its 10th year.  The train left Westminster at 6:40 a.m.; a round trip cost $1.50.  “Bands of music will be in attendance and the public are invited to go on this delightful trip down the bay.”  Not every journey was a treat, however, as the following paragraph from a July 1885 paper explains:

The Knights of Pythias excursion to Potomac Isle, last Saturday, was not very large, and many who went wished they had stayed at home, the weather was so excessively hot.  The trip would be an enjoyable one, with the mercury about 74; but to ride in an excursion train, with numerous stops, and to spend five or six hours on a sandy island, when the mercury is above 90o and a calm prevails, is not the pleasantest recreation that can be imagined.

For more adventurous (and wealthier) travelers, one Westminster newspaper advertised “A Delightful Excursion!  A party of ladies and gentlemen, limited in number, is now forming a trip up the Great Lakes to Duluth, Minnesota.  They leave Baltimore about July 20th, via Railroad to Pittsburg and Cleveland.  Thence by Lake Superior Transit Company’s Steamship to Buffalo and Niagara Falls.  Continuing by way of Buffalo and through Lakes Erie, St. Clair, Huron and Superior, making the most magnificent sail in America…Rates for Round Trip will include board at first-class hotels and every necessary expense.”

This column concludes four separate glimpses of summer fun and entertainment enjoyed by Carroll citizens.  By the end of the 19th century, easier and cheaper transportation had opened up new opportunities to venture far and wide, but those who stayed at home for one reason or another were not without diversions from the planting, harvesting, canning, laundry, shop keeping, etc. which filled their lives most of the year. 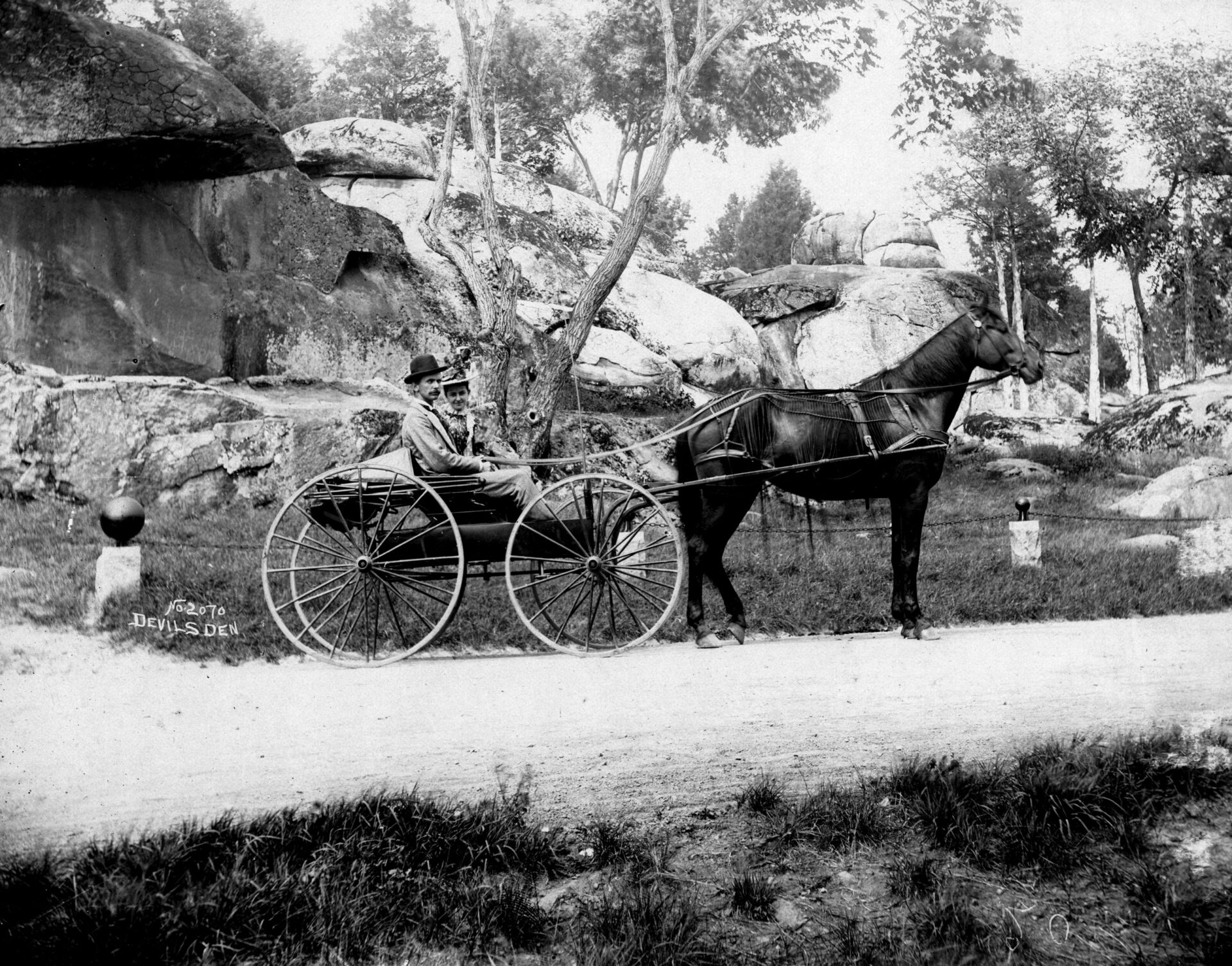 Photo caption:  Ada and Guy Cookson stopped to have their photograph taken at Devil’s Den during a visit to the battlefield at Gettysburg in 1898.