For years farmers near Union Bridge burned local limestone in small kilns to spread on the soil and Israel Rinehart operated a marble quarry close by, but no one recognized the rock had far greater potential until 1909.  That year, a Pittsburgh chemist hunting for limestone to use in the manufacture of glass discovered that the Union Bridge rock was almost perfect for making Portland cement.  He shared his findings with a cement and firebrick manufacturer who lost no time in confirming the information and gathering investors to build a cement plant in town.

The Tidewater Portland Cement Company set off an economic boom in Union Bridge that far surpassed the arrival of the Western Maryland Railroad shops or the establishment of the Maryland Collegiate Institute (later called Blue Ridge College).  Over two hundred acres of property south of town were quickly purchased and construction of numerous buildings to produce hydrated lime as well as white and grey Portland cement began in September 1909.  A spur of the Western Maryland Railroad reached the plant via Farquhar Street; the Pennsylvania Railroad also served the plant.

Numerous items from the Union Bridge Pilot during the spring of 1910 reveal the intense activity taking place in town:

Zero weather, instead of retarding work at the cement plant, appears to have the effect of accelerating it.  The furnaces are all erected and a force of masons are at work lining them with brick.  Grading for the extension of the switch is going on, a large force of men have diverted the course of the creek, preparatory to building a dam, and the piers for the elevated railway are being built.  Over 100 men were at work the past few days.

The fact that both the R. R. shops and the Cement Co. advertised for workmen last week is evidence that labor is in demand in this section.  Our merchants and business people also report excellent trade conditions.  We are in need of more houses at this time which would induce more to locate here.

There is much to be seen at the cement works nowadays.  Everything about the plant is hustle.  Nearly half a dozen buildings are in course of erection, concrete foundations being laid, grading for new switches and the Hydrating lime plant in full operation.

Fire was started in the lime furnaces on Tuesday afternoon and they are now kept going continuously and working quite satisfactorily.  The furnaces hold probably from 800 to 1,000 tons of stone and it is said that about a car of coal will be used each day, 40 cars of which was recently ordered.  Work on the machine shop, blacksmith shop and lime storage building are also in progress.

Operations at the Cement plant continue without cessation, not even stopping for Sunday.  A large force of men are at work excavating for an artificial lake, which will probably cover several acres, while others are at work on the piers for the elevated cable line, crushing stone, etc.  As many as 125 men have been employed, some coming from Baltimore and Howard counties.

Work was temporarily suspended in some of the departments at the Cement Works here on last Monday when 83 workmen demanded $1.60 per day of 9 hours, instead of $1.40 for a ten-hour day as at present.  The greater part of these were at work again by Tuesday morning at the old wage schedule, while more have since returned.  It is not likely that the agitators will be given work for awhile – probably not at all, as the company is now erecting barracks sufficient to house 100 men, whom they will probably bring here, should these labor troubles continue, although they have shown a preference for home labor.

Hydrated lime was available by mid-April 1910 and the first Portland cement was ready on October 10, 1911, just over two years after construction began.  Local residents immediately felt the impact of the plant both positively and negatively.  Plenty of work was available, but cement dust was everywhere!  Blue Ridge College, situated right next to the plant, recognized it couldn’t continue in that location and moved to New Windsor in the fall of 1912.   For many years, Tidewater had its offices in a former college building. 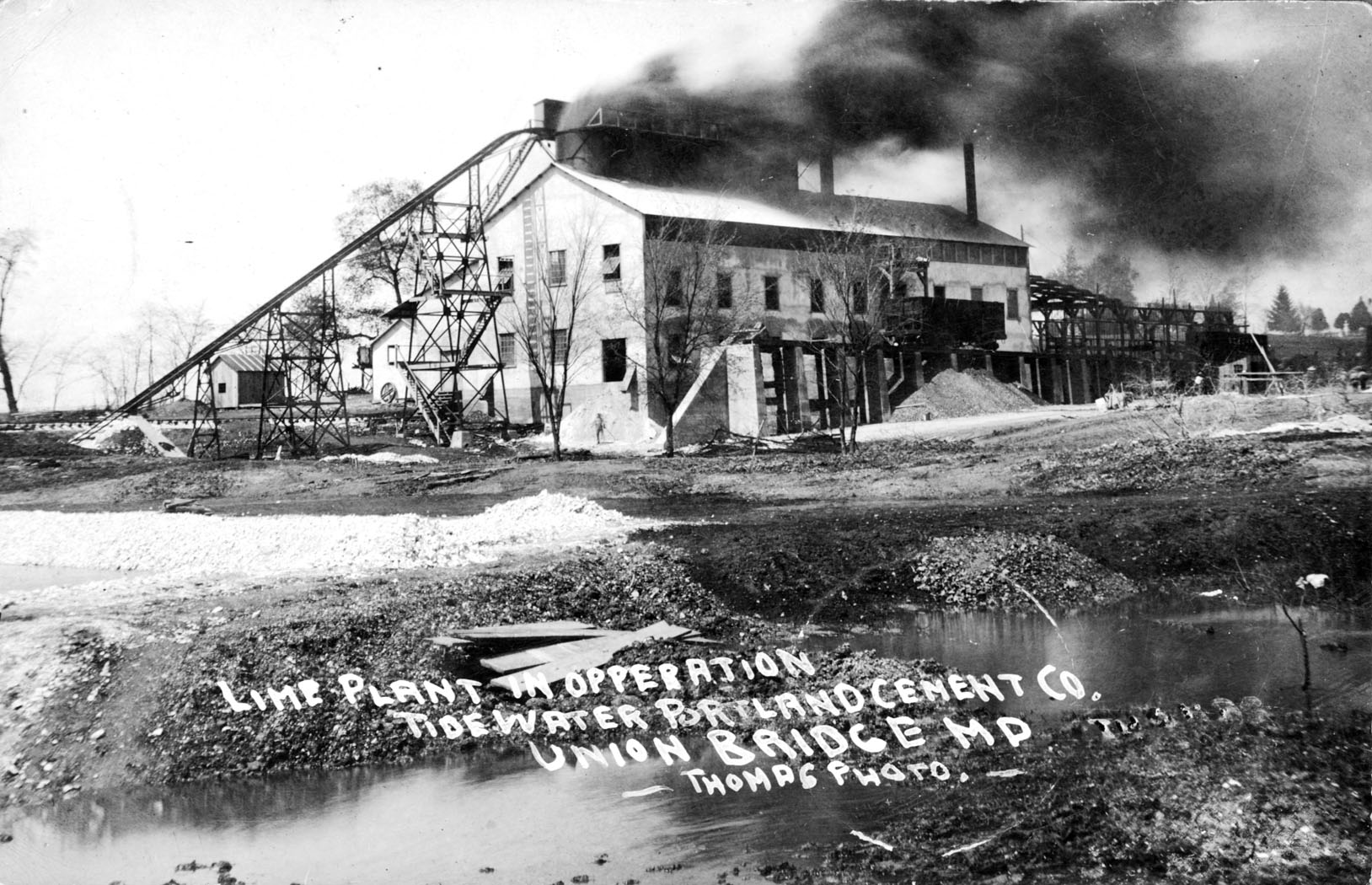