28 October 2018 – From the Meuse-Argonne to the Armistice

28 October 2018 – From the Meuse-Argonne to the Armistice

Carroll Yesteryears
28 October 2018
From the Meuse-Argonne to the Armistice
By Jay A. Graybeal

One hundred years ago the Great War entered its final phase of combat. The Allied Powers launched an offensive against the Germans along the entire Western Front in the fall of 1918. The American Expeditionary Force, under the command of General John J. “Black Jack” Pershing, began its attack in the Meuse-Argonne in north western France on September 26, 1918. It became the largest operation in American history with 1.2 million service personnel involved, and lasted until the fighting ended with the Armistice on November 11. Nearly 1,000 Carroll County men and women served in the armed forces during the Great War and several hundred of them participated in the Meuse-Argonne Offensive. The offensive claimed the lives of seven local Soldiers and one Marine and wounded many more. The first fatal casualty was Private John Carroll Yingling, Co. A, 311th Machine Gun Battalion, 79th Division, of Westminster, killed in action on the first day of the offensive. Private First Class Verl Eugene Cluts Snider, Sanitary Detachment, 313th Infantry Regiment, 79th Division, of Taneytown was killed in action o n September 29.

The last local casualty of the Meuse-Argonne Offensive was Corporal George Paul Frankforter, Co. E, 115th Infantry Regiment, 29th Division, of Manchester, who died of wounds on November 12, 1918, a day after the Armistice had been declared. Corporal Frankforter and his comrades were among the more than 26,000 Americans who died in the
Meuse-Argonne, the largest military operation undertaken by the American military. Hard fought American victories in the Meuse-Argonne contributed to the Armistice and the fighting ceased at 11:00 on the 11th day of the 11th month: November 11, 1918. The War to End all Wars was over, however, its impacts are felt a century later. Elderdice memoir
Second Lieutenant Hugh Latimer Elderdice, Jr. (right), Battery B, 106th Field Artillery Regiment, 27th Division, of Westminster, participated in the Meuse-Argonne Offensive.

This is an excerpt from his memoir:
“As our guns were now out of range it was necessary to move forward to new positions. We were assigned a certain area within which we could select our new position. On Oct. 1, Capt. Parker and I, along with our instrument sergeant, Ruddy, set out on reconnaissance of the assigned area. We rode over the top of le Mort Homme (Dead Man’s Hill) to the EsnesBethincourt road, badly pockmarked with shell craters, and with traffic in a jam as usual. By cutting across fields we finally got to Bethincourt, which just a few days ago had been held by the enemy, and then rode on to Cuisy. We located suitable positions just north of the ruins. Captain Parker is center, Sgt. Ruddy left, and the boots, previously mentioned, should identify me. Our horses may be seen at the foot of the hill across the road, at the extreme left of the picture. We were going down to have a closer look at the ruins of Cuisy but changed our minds
when German 105mms started falling there. During our reconnaissance in the woods we ran across a German gun position that had received a direct hit by one of our heavies. The scene was too gruesome to describe.”

Bells of Peace
The United States World War One Centennial Commission is sponsoring “Bells of Peace” as a way to observe the end of the Great War. All Americans are encouraged to toll the bells 21 times, at 5 second intervals, beginning at 11:00 local time on November 11, 2018. Individuals and organizations can register at ww1cc.org/bells.
Jay A. Graybeal is the former director of the Historical Society of Carroll County. He currently serves on the Maryland World War I Centennial Commission. 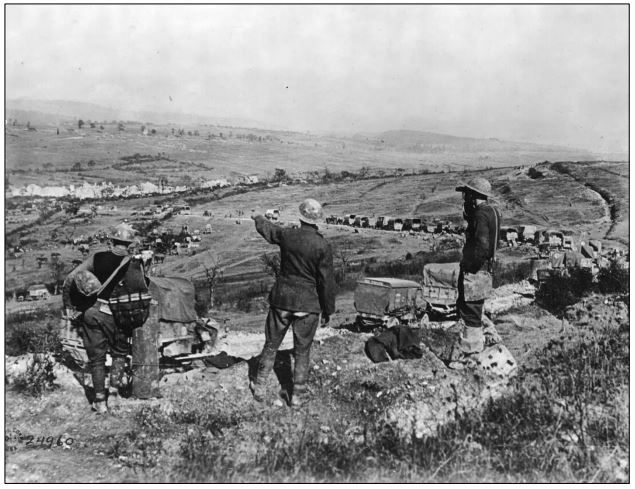