The amount of rainfall in Carroll County this summer is proof that you can get too much of a good thing!
Events have been canceled, especially those on the grounds of the Union Mills Homestead and at the Farm Museum. I heard that Jim Shriver needed his tractor to retrieve furniture from the Homestead and nearby park that floated down Big Pipe Creek when that major stream overflowed its banks and created a shallow lake near the intersection of Rte. 97 and Old Hanover Road in August. Several hundred years ago the Shrivers of Union Mills, the Kepharts who settled between Taneytown and Uniontown, and other early families operated very successful grist mills utilizing
the abundant water power offered by Carroll’s streams, particularly those that flowed west to the Monocacy off the high ridge that runs across the county from northeast to southwest.

In her book Mills and Memories, Joan Prall mentions the earliest local mill was established on Little Pipe Creek near Union Bridge about 1742 by Thomas White. By 1794 there were more than 30 mills in the area that became Carroll County, and by 1862 over 100 mills appeared on the Simon Martenet map of the county. Not all of these mills ground corn, wheat, rye, or other grains. There were, in smaller numbers, fulling mills to clean wool, oil mills to grind flaxseed into linseed oil for paint, paper mills, and saw mills. Water powered these operations. Streams like Big Pipe Creek, Little Pipe Creek, and their major tributaries, Meadow Branch and Sam’s Creek, were dotted with mills. It is intriguing to look at copies of the Martenet map hanging at the Westminster Library, at the Historical Society, at the reopened Manchester Historical Center, and other locations to get an idea of how many mills dotted our rural landscape.  This brings us back to the amount of rain we have experienced this summer. Too much rain could wreak havoc for mills and millers as well as too little. Prall’s book says, “The best water sites were often downstream from forested lands, which protected against flooding.” If the mill site included a dam to create a mill pond, too much water could break the dam, sending thousands of gallons of water toward the mill and its vulnerable wooden wheel.
German immigrant Andrew Kephart purchased property with a mill in 1792 just south of Taneytown where Meadow Branch Creek flows into Big Pipe Creek. His son, David, eventually accumulated 577 acres at that location which he named “Brick Mills.” He may have had mills on both streams as a description of his operation mentioned two wheels with a stone at each, thus enabling him to utilize the tremendous water power available. “Kephart’s Mill was the standby when [other mills] failed and it was not unusual in dry seasons for the farmers to bring grists from long distances and encamp in their wagons through the night, waiting for their grist to be ground and this made Kephart’s mill famous.”

Like farmers, millers were at the mercy of Mother Nature in wet seasons or dry. Mary Ann Ashcraft is a library volunteer at the Historical Society of Carroll County. 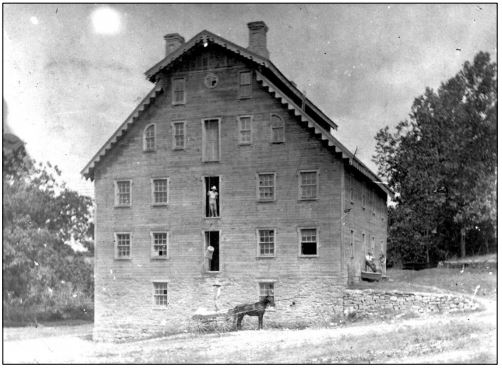 Photo credit: Historical Society of Carroll County
Photo caption: This handsome mill, now demolished, stood on the property once owned by David Kephart. In the 1850s the Kephart family sold the land to W.W. Dallas who renamed it “Trevanion” and made major changes to the buildings.