A walk in old cemeteries near New Windsor, Uniontown and Union Bridge is almost guaranteed to offer a glimpse of 19th century gravestones carved by a black craftsman named Caleb McPeak.  His work hasn’t received as much recognition as that of “Boss” Hammond, but he deserves mention as another Carroll County artisan working between the1820s and the 1840s.

Records in German from St. Luke’s (Winters) Lutheran Church reveal that a young man named “Calep M. Pek” was born out of wedlock and baptized in 1794 when almost 16 years old.  His mother wasn’t identified.  All evidence points to his being the same person as the gravestone carver whose name appears variously as McPeke, McPike, M. Peke, McPeach, Peack, McPeack, etc.

Whether McPeak was a slave at birth remains a mystery.  His father apparently was white and his mother black or mulatto.  Caleb always lived along Bark Hill Road outside Union Bridge, an area with a sizable Quaker population.  Because Quakers were opposed to slavery, it is possible Caleb’s mother was free.  By law, the “condition” of a child was dependent upon the “condition” of its mother.   Regardless of whether the father was free or slave, if the mother was a slave, so were her children.

Land records show he bought and sold property along Bark Hill Road.  Eventually he owned a log house and a shop where he probably did his carving.  In the 1830 census, he was living alone.  If he ever had a wife or children, their names haven’t been uncovered.  By 1850 when census takers began recording everyone in the households they visited, McPeak was an old man with Rebecca Hill keeping house for him.  He died in 1866 and named her the beneficiary of his small estate.

Most McPeak gravestones were the same basic shape.  His lettering was skillfully carved with everything in uppercase.  Often he added a simple verse after the name, age and death date of the deceased.  The one most commonly used was: “Farewell dear friends, pray cese (sic) from tears, I must lie hear (sic), till Crist (sic) appears.”  For decoration he frequently etched several straight lines that spanned the width of the stone plus a unique design that must have required a compass.   His prices were generally lower than most other carvers  – $8.50 to $13.50 for headstone and footstone.

How do we know McPeak was the carver when he didn’t sign or initial any of his work?  The administration accounts that executors filed in the courthouse sometimes listed the name of the person who was paid for the gravestones.  John Beaver was another active Carroll County carver during the same period.

Today, the company supplying a memorial puts its identification tag in an inconspicuous spot on the stone, but this wasn’t the practice during the first half of the 19th century.  Tracking down the names of old-time carvers or their firms gets more difficult as you go back in time.

A visit to St. Luke’s (Winter’s) Cemetery between New Windsor and Union Bridge offers the chance to see many of Caleb McPeak’s stones.  There are also quite a few fascinating markers with unusual shapes which may have been created by McPeak in his whimsical moments or could be the products of another carver still to be discovered. 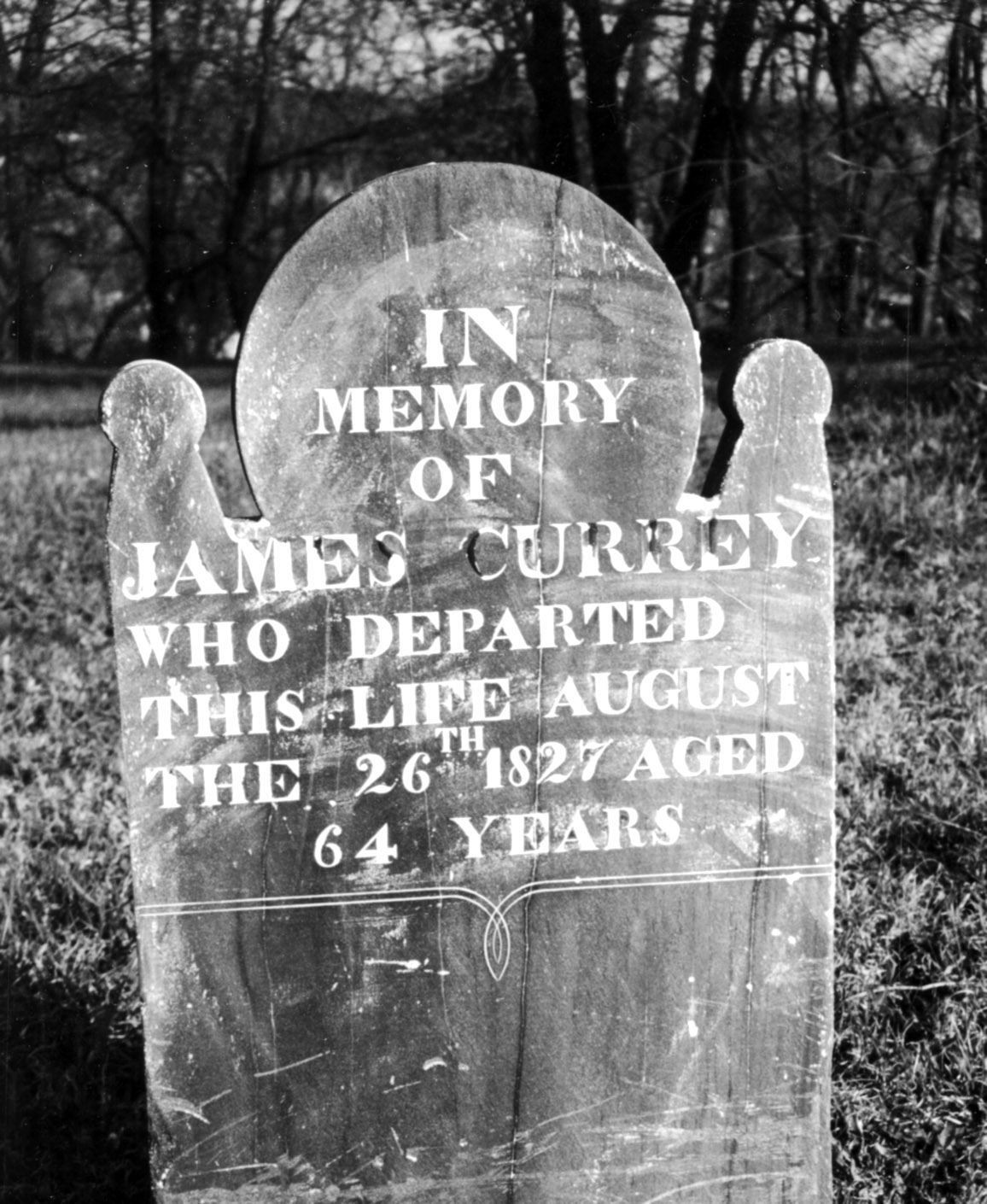 Gravestone of James Currey in Uniontown’s Church of God Cemetery with one of McPeak’s decorative motifs.     Photo courtesy of Mary Ann Ashcraft.