Summer is a Good Time to Look at Your Own History

Summer is the traditional time for family reunions and Carroll County is often the chosen site because it still has so many families whose roots go back centuries. Surnames such as Devilbiss, Roop, Royer, Naill, and Shipley come immediately to mind.

There is no telling how far people are willing to travel for a chance to see their relatives and share family history. A recent Baumgardner reunion brought at least one family member from California, but in 1924, when long-distance travel was more difficult, the Barnes family reunion boasted attendance by relatives coming all the way from Pittsburgh. Today it isn’t unusual for Americans to travel back to Europe to reunite with the portion of their family that never left the old country.

In 1927 the first of the annual Roop/Royer reunions attracted over 350 people and a panorama photo of the participants measures 7 inches by 41 inches! In 2004, the Times carried a front-page story about a local Fisher reunion.  Host Ron Fisher surprised his assembled relatives by producing his fifth great-grandfather’s “naturalization” document dated September 15, 1762.  The fragile paper declared that George Fischer (original German spelling), a resident of what eventually became Bachman’s Valley, had met the residency requirements in the colony of Maryland, sworn allegiance to King George III, and was now a subject of that English king.

Ira N. Barnes, a resident of Carroll’s Freedom Election District, wrote a humorous description of a family reunion under the pen name “Silly Shorty” that appeared in the April 16, 1926, issue of the Democratic Advocate:

…Miss Sissie Shorty, Silly’s oldest gal, constructed a geneological tree of the Shorty family but discovering many rotten, gnarled and naughty limbs, these were summarily pruned and discarded.

Further tracing the roots of their family tree, the fact was deduced that the original progenitors of the Shorty family in America came over from England in the Mayflower, mostly as butlers, valets, cooks, maids, men-of-all-work and other servants.  Delving still deeper into their geneological rootlets it was finally ascertained that one of the remote ancestors of the Shorty family was hung at old Newgate Prison in England for the murder of his mother-in-law.  In those days English law was very strict.  At the present time in this country, no one would be subjected to capital punishment for such a trivial offense; especially if tried by a jury of married men.  They would not only acquit the accused, but would also present him with a medal for bravery.

After the discovery of this last fact regarding the Shorty lineage, consideration of the geneological tree was brought to a sudden close, and Miss Sissie for the further entertainment of the numerous guests eloquently recited the following immortalized lines:

‘Depend upon it my snobbish friend,

Your family thread you can’t ascend,

Without good reason to apprehend,

You’ll find it waxed at the farther end

By some common occupation

Or worse than that your boasted line

May end in a loop of stranger twine,

That choked some of your relations.’

Why not keep your family’s history alive at a reunion here or elsewhere? 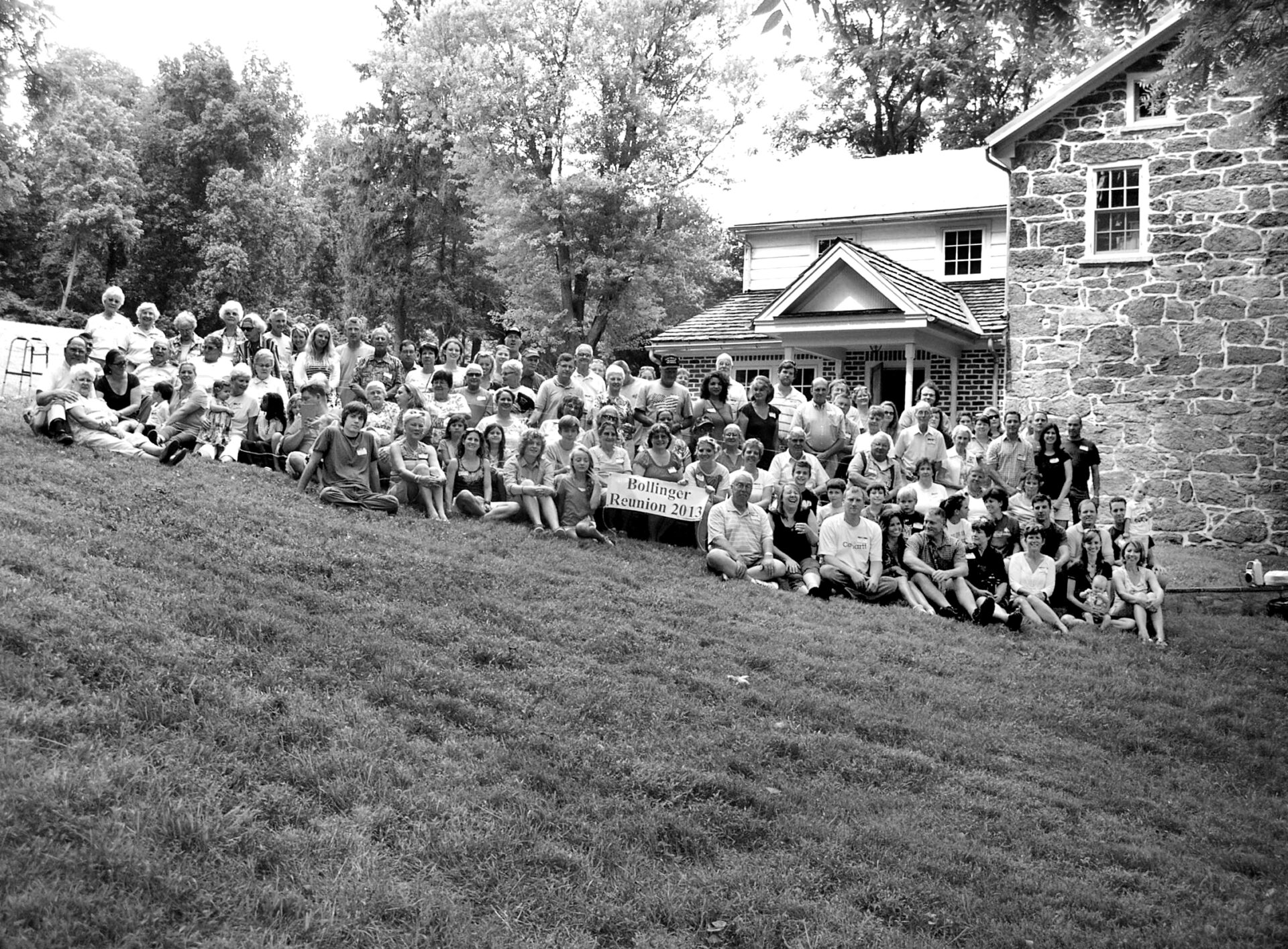 Photo caption: In 2013 approximately 125 descendants of the Widow Bollinger and her sons held a family reunion at “Bollinger’s Contrivance” near Lineboro. Attendees came from across the U.S. and one even arrived from Africa.