While sheltering in our homes, we’ve all been looking for things to keep us occupied. Many are serving their communities by sewing masks for those who need them. What they’re doing is great, but many of us don’t have the necessary sewing skills.

Prior to 1850, stitching samplers was an important lesson in the education of young girls. The main reason for creating the samplers was to practice stitching letters and numerals. Proper housekeeping required that clothing and linens be marked (usually with initials and a date) and the letters and numerals stitched on a girl’s sampler would later appear on a family’s textiles. Many samplers also included rows of darning stitches that would be needed in repairing the family’s clothing and linens. The sampler thus became a pattern book of stitches and designs to which its owner could refer throughout her life. Bible verses or poems frequently appeared on samplers and not only provided practice in stitching but also contributed to the girls’ moral education.

Usually stitched by girls from 8 to 13 years old, samplers were typically made on loosely woven, unbleached linen and stitched with cotton or silk thread. The most common types of samplers featured alphabets or pictures. Occasionally samplers were done freehand but usually the maker followed a pattern. It is not uncommon to see the same design used by several girls in a family or area who were taught from the same pattern book.

Here are examples of samplers from HSCC’s collection.

Sampler, 1788
Eliza Browne
Verse: “Still as through life’s meandring paths stray  /  Lord be the sweet companion of my way  /  A kind conductor to the blest adode  /  of life of light of happiness and God” Signed: “Eliza Browne is my name /  America is my nation   Queen Anns is my dwelling place /  And christ is my salvation   1788” 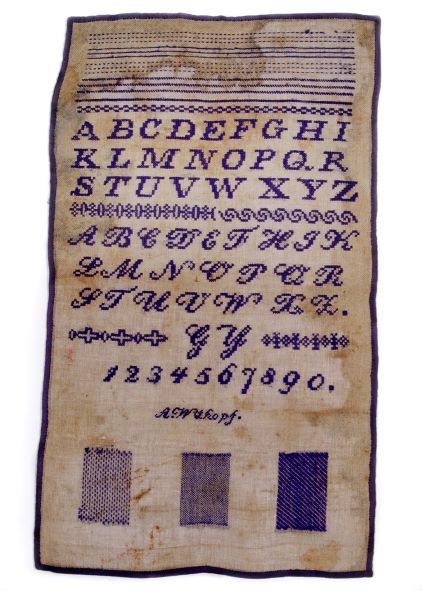 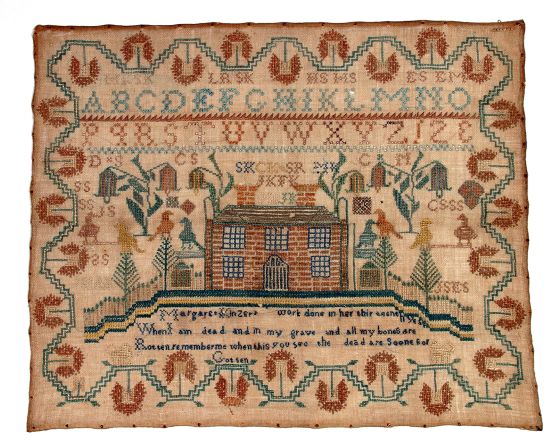 Sampler, c.1815
Margaret Kinzer, age 13
Verse: “When I am dead and in my grave and all my bones are rotten / remember me when this you see / the dead are soon forgotten” The most common types of samplers featured alphabets or pictures. The maker of this sampler combined the two types. The holes around the sampler’s edge resulted from nailing the piece to a board for framing. The iron nails rusted and left permanent stains around each hole. 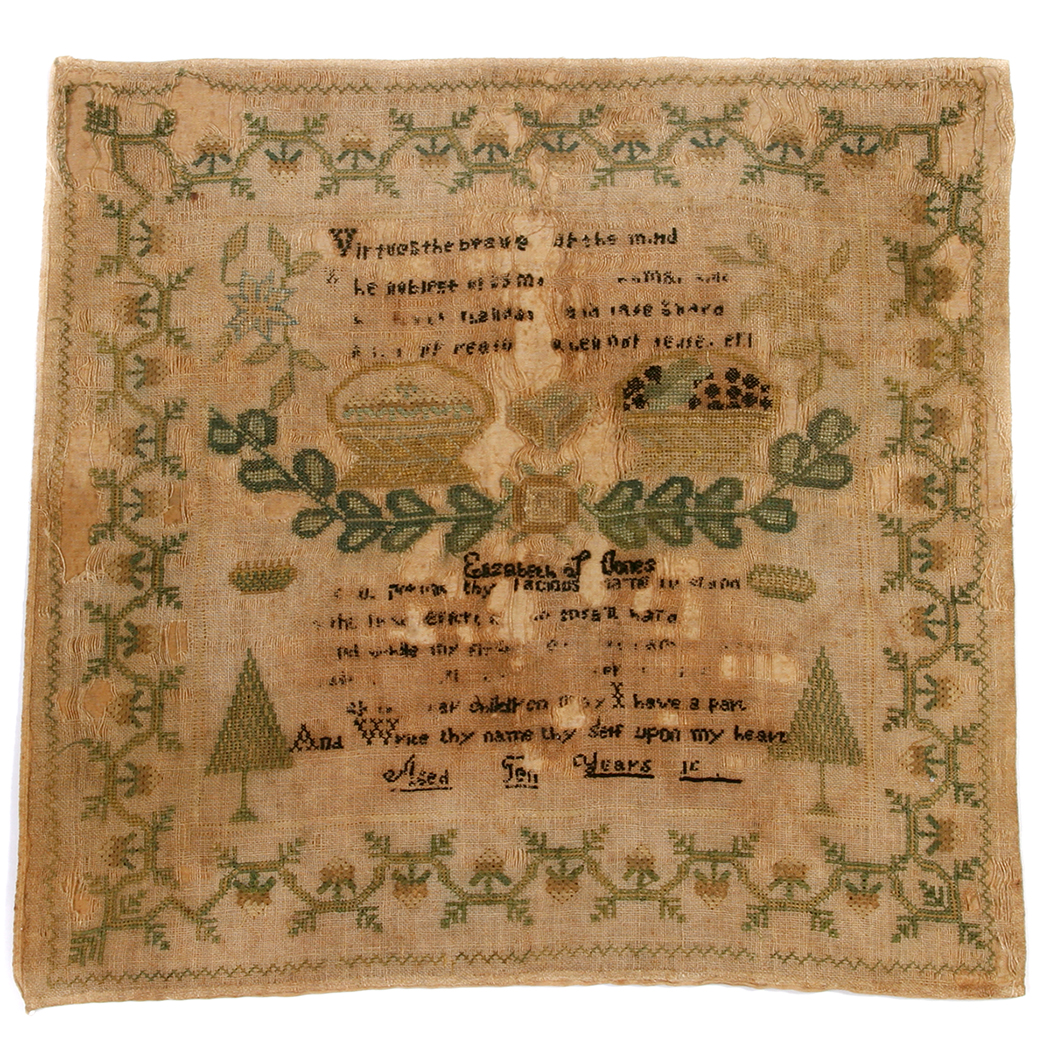 Sampler, 1827
Elizabeth Sarah Jones, age 10
Verse: “Elizabeth S. Jones Aged 10 years”
Elizabeth Jones was the seventh child of Phillip and Mary Jones. Phillip was an early Westminster merchant and built the house at 132-134 East Main Street around 1817. Around 1835 Elizabeth moved to Bangor, Maine, with her parents. There she married Benjamin Francis Perry on April 25, 1839. Benjamin died shortly after their daughter, Mary Pauline, was born. Eventually, Elizabeth returned to Westminster where her sister, Catherine Jones Shellman, resided with her family. 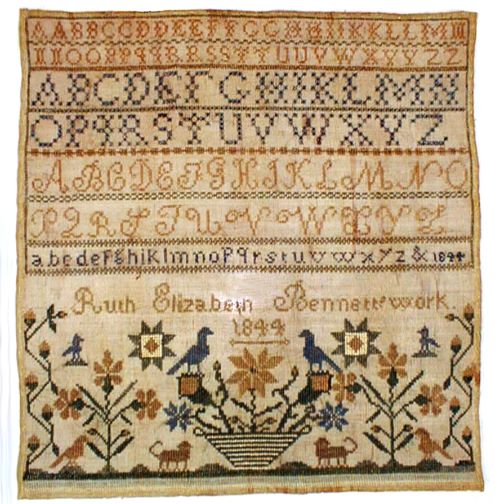 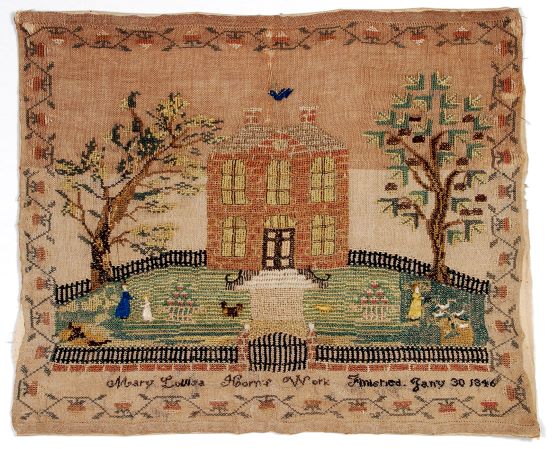 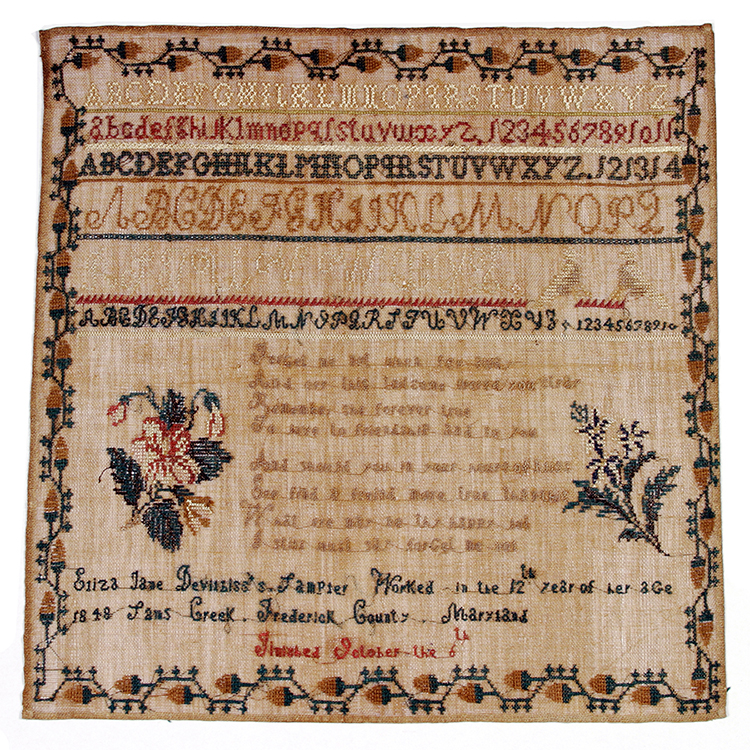 Sampler, 1848
Eliza Jane Devilbiss (b.1831 – d. 24 September 1917), age 12
Verse: “Forget me not when far away / And o’er this toilsome world you stray / Remember me forever true / To love to friendship and to you / And should you in your hour of bliss / E’er find a friend more true than this / what ere may be they happy lot / I still must say forget me not”
Signed: “Eliza Jane Devilbiss’s Sampler Worked in the 12th year of her age / 1848 Sam’s Creek Frederick County Maryland / Finished October the 6th”
Eliza Jane outlived three husbands (John D. Switzer, William Smith and George L. Stockdale) and had one son, Thomas Devilbiss Switzer, who died at 8 months of age. She is buried in Bethel United Methodist Church cemetery, New Windsor.