In the 1880 census the African American centenarian Nancy Saunders was living with her son George in the Englar’s Mill area of Frederick County. Two years earlier there had been an article in the Democratic Advocate with her age reported as 103. Now her age was listed as 108. Within another year an article appeared in the newspaper in which the author wrote that by his calculations Nancy was 114 years old. Not long afterwards Nancy sent word to Samuel Hoff that she wanted to relate her connection to the stone house that he had recently purchased. Samuel sent his son John to hear her story. As recounted by John’s son Edwin, Nancy explained why she came to Sam’s Creek from
Montgomery County:
“She told Dad that when the house was built she was a slave girl of fifteen years. She said that she used to cook for the stone mason’s slaves and that she drove the oxen, which were hitched to a lizard (a forked tree), for the stone mason. Stones, used to build the house, were rolled onto the lizard from the hill above the house. The oxen then pulled the stones (on the lizard) to the house, and the stones were used to construct the walls of the house.”

“My Dad asked her how the slaves put the large field stones on the walls of the chimney. The old slave lady said that they piled logs up next to the house. These logs were used to fill the small valley between the house and the hill. As the stone walls were built higher, the stack of logs was increased. This enabled the stone mason and his slaves to build the high walls of the house and chimney, by driving the oxen and lizard over the stacks of logs to the house. The slave lady told Dad that it took two years to build the stone house. The old slave also told Dad that she would be 115 years old this year.”

In the November 4, 1882 edition of the Democratic Advocate the following notice appeared: “Nancy Saunders, an old colored woman residing near Sam’s Creek postoffice, died on the 25th of October, supposed to be 110 or 112 years of age.” There is no known record of where Nancy is buried. Her daughter Polly and sons George and Enoch are buried in the Mt. Olive cemetery off Parsonage Lane near the Carroll-Frederick border. Undoubtedly, Nancy and her husband, Timothy, are also buried there, especially since he was a guiding force in establishing the cemetery. Without a gravestone what physical evidence remains of Nancy’s life, besides stories of her age? The house where she lived with George stands immediately to the right of Route 31 just after it crosses into Frederick County, sadly empty of human life today. The stone house, the reason she was brought from Montgomery County, still stands on Hoke Road and is a silent reminder of her long life in the valley of Sam’s Creek and in the Hills above. Most importantly though, there are the children of her children and their descendants. 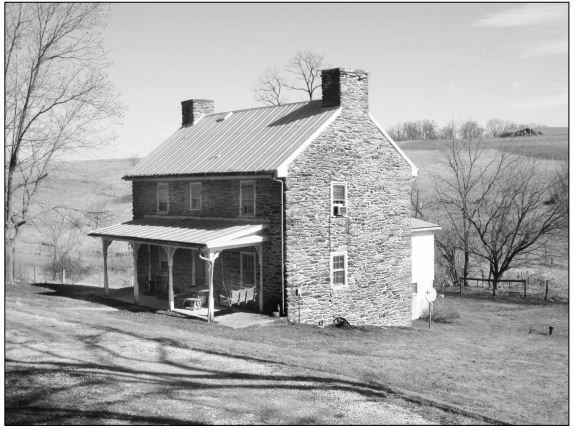 Shown here in a recent photograph is the stone house on Hoke Road (off Sam’s Creek Road) that Nancy Saunders and others built over the course of two years in the late 1700s.