It's Playtime: A Look at Toys throughout History

The sun is shining, it’s nice and warm outside, and the school bell has just rung for the last day of the year, heralding the start of summer vacation for kids across America. For the next few months, kids can spend their days hanging out with their friends, hitting the beach or the pool, or playing with their newest toys. No matter what period in history you find yourself in, some things remain the same: in this case, the possibly universal need for kids to play and have fun, and the toys they use serve as a reflection of the society that made them. As society has grown and advanced technologically, toys have grown and changed along with them. Inevitably, some toys are able to stand the test of time and passed down from generation to generation, with some of them ending up donated to Museums to be preserved for posterity. Over the years, the Historical Society of Carroll County has amassed a significant collection of antique toys, ranging from dolls to cars to even a pinball machine. Shown below are some of the best examples of toys through time that we have to offer to the public.

First up on our list is a Dump Truck Pedal Car. When the automobile industry was born, it inadvertently created a new type of toy, the pedal car. Modeled after their adult counterparts, these child-sized vehicles contained a set of pedals that kids would push using their legs to allow it to move. Like the first cars, though, the pedal cars were reserved for the wealthy, so only a few lucky children could get one from their parents. However, following the end of WWII, there was a surplus of factories that had once made weapons and equipment for the war effort that we no longer needed; they converted to the production of goods for the public, such as automobiles. When cars became widespread in America during the 50’s, pedal cars boomed in popularity. This car in question is a Murray Jet Flow Builders Supply Dump Truck made around 1953, and was given as a Christmas present to Westminster native Robert Erb and affectionately named “Dumpy”. After years of playing with it before giving it to his younger sister and daughter, Erb was nice enough to donate it to our collection. 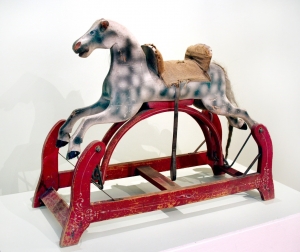 The rocking horse has been a staple toy for kids for decades, with this one made in the late 19th century. Donated by Victor Weybright.

Second is a 19th century Rocking Horse. Toy horses have been a staple of playtime for centuries, with the first stick horses going back to the age of the Greeks and Romans. No one knows who made the first wooden rocking horse, but as the 18th century gave way to the 19th, they had become sophisticated works of craftsmanship, lovingly made by skilled wood carvers. As was the case with the pedal car, only the wealthy could afford them, but the rise of factories in the Industrial Revolution allowed mass production for the growing middle class, and allowed craftsmen greater freedom to customize them to their liking. These new factory horses could be given ears and stirrups made from leather, padded seats, and manes and tails made from real horse hair; the best ones could be covered with actual horsehide. The horse shown here is most likely based on the design patented by Philip Marqua in 1878, featuring a spring loaded horse attached to a safety stand to keep it from tipping over. The horse was a favorite childhood toy of Victor Weybright, a resident of Hollow Rock Farm, Westminster, along with his twin sister, Victoria. Victor was an amateur historian and the author of a book on Francis Scott Key, Spangled Banner, and a supporter of the HSCC, which led him to donate this horse to us. 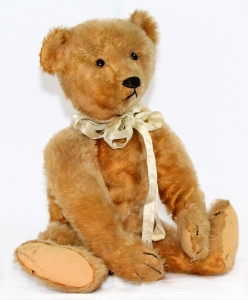 Teddy Bears have kept kids company for more than a century, and this is one of the earliest ever made. Note how it resembles a real bear more than its descendants, but as cuddly as them. Donated by Dr. Grace Fox.

Teddy bears have remained a staple toy of children for more than a century, and many people know that it was named after the 26th President of the United States, Theodore “Teddy” Roosevelt. The story of how this came to be, though, is just as interesting. In the fall of 1902, Governor Longino of Mississippi invited Roosevelt, an avid hunter and sportsman, for a hunting trip. While their groups first day yielded no quarry, on the second day managed to corner and severely injure an old black bear, who their guide ordered tied to a tree so the President could finish it. Upon seeing the poor bear’s state, Roosevelt refused, calling it “unsportsmanlike”. While he did order the bear put down, the news of his actions spread across America and were immortalized in a cartoon in The Washington Post; the Post took creative liberties, though, depicting the bear as a young cub instead. When word of the cartoon reached Morris Michtom, owner of a candy store in Brooklyn, he put a stuffed bear that his wife Rose had made, calling it “Teddy’s Bear”. The bear became so popular that people began making offers to buy it or more like it; Michtom sent the original to Roosevelt’s kids and got permission from Teddy to use his name for the bears, and thus the Teddy Bear was christened. Simultaneously, a German company, Steiff, had started their own line of stuffed bears, which also came to be called Teddy Bears. Dr. Grace Fox, born in D.C. but a resident of Fairhaven, Sykesville before her death in 1984,  donated the bear pictured here to us, which was made in America around 1905, making it one of the oldest bears in existence. The biggest difference between this bear and its modern-day descendants is the texture of its “fur”: in the early days, Teddy Bears were made using a pseudo fur used to make upholstery. This means its fur is rougher than modern bears. It also looks more like an actual bear. 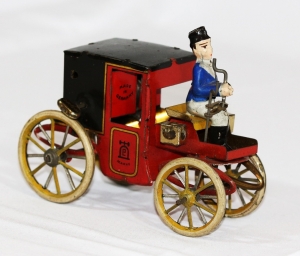 This tin-plated wind-up car looks more like a horseless carriage because that’s what early cars looked like. Donated by Dr. Grace Fox

Wrapping up our list is another artifact donated by Dr. Fox, a tinplated, wind up horseless carriage from Lehmann Grossbahn, or LGB or simply Lehmann Co. Founded by Ernst Lehmann in 1881 in Brandenburg, Germany, Lehmann’s brand of tinplated toys were seen as innovative over the iron toys made by most of his competitors. Tin toys were not only cheaper than their iron counterparts were, they were light in weight but could have level of detail that was impossible with iron toys. Lehmann Co. became so successful that by the early 20th century, they were one of the leading names in the creation of novelty tin toys. Meanwhile, the birth of the car industry had inspired the popularity of automotive related toys, like the previously mentioned pedal car. Like their larger pedal-pushed counterparts, automotive tin toys reflected the car models of the day; in the case of the “Horseless Carriage” toy, made around 1910, it was simply a carriage powered by engines rather than horses. The wind-up toy is incredibly detailed and colorfully designed, with the “made in Germany” visible in the photo on the inside of the carriage, while the Lehmann Co. Logo is shown on the side of the door. Overall, it is an incredible work of art and a reflection of the entertainment children from a hundred years ago could have from watching this colorful little car go on the floor of their homes.

No matter what era it is or what civilization it may be, the need for children to play and entertain themselves is collective. From the smartphone apps of today to the antique toys of yesteryear, playtime is something most kids will experience throughout their lives, and the toys they use can be a reflection of themselves and their culture. Some people might think it’s not as important to preserve things like toys, but they remain valuable cultural artifacts that should be preserved for future generations to study and learn from, and maybe even be able to enjoy for themselves.

Become a Member Today and Join Us in Connecting the Past and Present.

Donate Today and Help Us Keep the History of Carroll County Alive.

Support the Museum
Go to Top